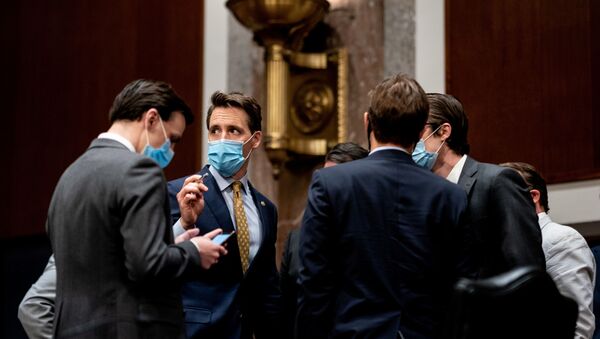 Oleg Burunov
All materialsWrite to the author
In late May, The Wall Street Journal reported that US President Donald Trump is considering the formation of a panel that would review complaints of bias against conservatives on social media.

A group of Republican US Senators has introduced a bill to limit the legal protection of Big Tech companies, including Facebook, Google, and Twitter.

The bill was initiated by Senator Josh Hawley and co-sponsored by fellow Republicans Marco Rubio, Tom Cotton, and Mike Braun. Hawley, for his part, said in a statement that if approved, the measure would give users “the right to sue if the big platforms enforce their terms unfairly or unequally”.

“Big Tech companies like Twitter, Google, and Facebook have used their power to silence political speech from conservatives without any recourse for users. Congress should act to ensure bad actors are not given a free pass to censor and silence their opponents”, he added.

Those services that "restrict access to or availability of material against a user by employing an algorithm that selectively enforces" its policies will be stripped of the liability protection, according to the document.

Eric Goldman, director of the High-Tech Law Institute at California-based Santa Clara University, was cited by the AFP news agency as saying that he sees the bill as “a straightforward First Amendment violation”. The First Amendment, in particular, guarantees freedoms related to religion, expression, assembly, and the right to petition.

Goldman also suggested that the bill may result in "an infinite number of lawsuits" against internet companies due to the vague definition of “good faith” actions.

The remarks come after US President Donald Trump told reporters in late May that he would “shut down” Twitter if his lawyers found a way to do it.

The comments followed POTUS signing an executive order calling for a series of legislative and legal actions to prevent popular social media platforms including Twitter, Facebook, and Google, from regulating user content, in a move that came amid allegations of bias and censorship against conservatives.

The decision was preceded by Twitter flagging potentially-misleading tweets related to mail-in ballots earlier posted by the president on the social network.

Earlier in May, Trump claimed in a tweet that social media companies are controlled by what he described as the Radical Left, citing right-wing pundit Michelle Malkin as saying that tech companies censor Americans.

Social Media is totally discriminating against Republican/Conservative voices. Speaking loudly and clearly for the Trump Administration, we won’t let that happen. They are closing down the opinions of many people on the RIGHT, while at the same time doing nothing to others.......

Back in 2018, the US president blamed social media networks for “totally discriminating against Conservative voices”, following a report by the news outlet Vice which argued that Twitter was allegedly limiting the ability of users to search for prominent Republicans.