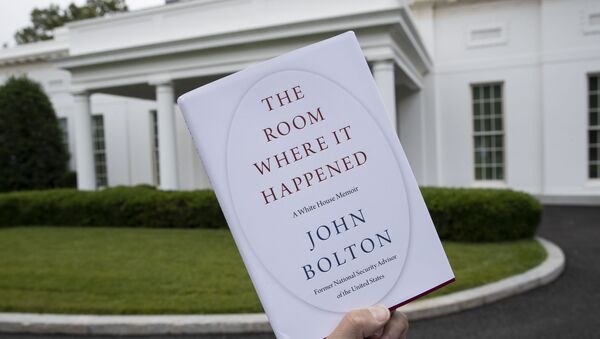 The book, titled "The Room Where It Happened: A White House Memoir", sparked furore even before being published, as US media released excerpts where Trump is depicted as easily manipulated by foreign leaders. Trump has previously strongly condemned the book and the former adviser, whom he called a "disgruntled boring fool".

Donald Trump has once again taken to Twitter to lash out at his former National Security Adviser John Bolton over the latter's controversial book, which is soon to hit shelves, containing damaging allegations against the US president.

The tweet follows a previous post in which the president accused "wacko" Bolton of publishing lies, pointing out that his former adviser had only spoken good of him before getting fired.

Trump's indignant barrage of tweets comes as Bolton is set to publish his book "The Room Where It Happened: A White House Memoir", which contains the former adviser’s recollections of the president's alleged misconduct.

According to US media outlets that managed to obtain fragments of the forthcoming book, Trump sought aid from China's President Xi for his 2020 re-election bid and intended to "take care" of a federal investigation into the breach of anti-Iranian sanctions by a Turkish firm.

The publication also contains alleged gaffes and controversial statements by President Trump, such as his ostensible idea that invading Venezuela would be "cool".

In addition, the book reportedly reveals that Trump withheld military aid to Ukraine in 2019, which was the basis for the impeachment probe against him. According to the book, several officials, including Mike Pompeo, contemplated resigning over this revelation.

Earlier this week, President Donald Trump told reporters that it was inappropriate for Bolton to write a book with classified information in it, adding that he may be breaking the law if the book gets published.

Following the statement, the US Justice Department filed a lawsuit against Bolton to prevent the publication of his book.

Bad Blood Between Trump and Bolton

The US president and former national security adviser drifted apart amid significant disagreements over international politics related to North Korea, Iran, and Venezuela, towards which Bolton had a less conciliatory stance than Trump.

Additionally, Bolton refused to testify in Trump's impeachment trial over his alleged pressure on Ukraine and instead said that he'd disclose details of the US president’s misconduct in his book.

Bolton served as the national security adviser in the Trump administration from April 2018 to September 2019 and was notorious for his hawkish stance on international politics.