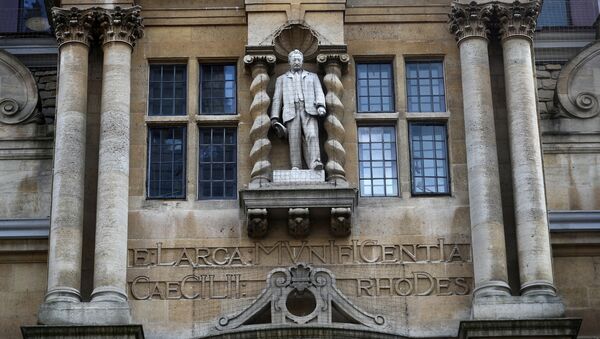 Muhammad Osman
All materialsWrite to the author
Last week, the statue was said to have been the target of demonstrations, with over a thousand protesters gathered outside Oxford University calling for the removal of the monument, which they said was a symbol of imperialism and racism.

Oxford University’s Oriel College on Wednesday decided to remove the statue of the former prime minister of Britain’s Cape Colony Cecil Rhodes from its premises in response to protests calling for its removal, Sky News reported.

Following a vote on the removal of the statue, the college governors also decided to launch an inquiry into significant issues about the legacy of Rhodes, which includes scholarships for international students at the university.

A Black Lives Matter protest in Oxford, they are demanding the felling of Cecil Rhodes' statue.

It shouldn't be the baying leftist mob!pic.twitter.com/QL0L2QJdst

"Both of these decisions were reached after a thoughtful period of debate and reflection and with the full awareness of the impact these decisions are likely to have in Britain and around the world", the governors said as cited by the outlet.

The governors said the they will look granting access to black, Asian, and minority students and staff of the university to attend the removal of the statue, which is not expected to take place immediately, to show "how the college's 21st-century commitment to diversity can sit more easily with its past".

Aerial view shows demonstrators gathered in the streets of Oxford, England, to demand the removal of a statue of Cecil Rhodes, a Victorian colonialist who made a fortune from mines in southern Africa and endowed Oxford University's Rhodes scholarships. https://t.co/lqVXyCRjc5 pic.twitter.com/8iEHEzRGjv

High Street in Oxford has been brought to halt by a sit-down protest against the Cecil Rhodes statue on Oriel College by #RhodesMustFall campaign. pic.twitter.com/Xe3emf85c5

A central figure in Britain’s colonial activities in southern Africa in the late 19th century, Cecil Rhodes allegedly made a fortune form gold and diamond mines in African colonies, forcing miners to work in brutal conditions.