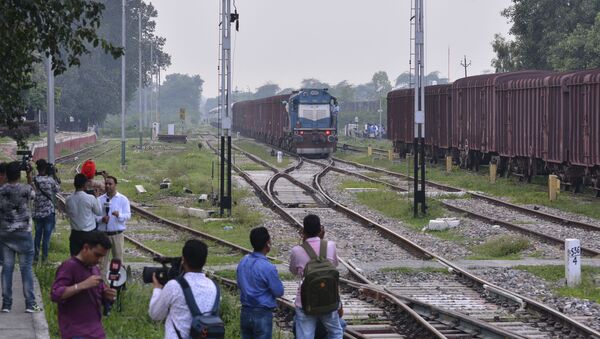 New Delhi (Sputnik): Amid flared up tensions between New Delhi and Beijing with the death of 20 Indian soldiers in violent hand-to-hand combat in Ladakh, the Indian government has been reconsidering the participation of Chinese firms in strategically sensitive sectors including railways and telecommunications.

In a series of actions taken by India following the violent standoff between the Indian Army and People’s Liberation Army, Indian Railways has terminated a contract valued $62.8 million with the firm Beijing Signalling & Telecommunication, citing “slow progress” in the work.

"In view of poor progress, it is decided by Dedicated Freight Corridor Corporation of India (DFCCIL) to terminate the contract with Beijing National Railway Research and Design Institute of Signal and Communication Group Co Ltd", DFCCIL, India’s Ministry of Railway unit said in a statement on Thursday.

The project, allocated to the Chinese company Beijing National Railway Research and Design Institute of Signal and Communication Group in 2016, was meant for signalling and telecommunications work along the 417-km Kanpur-Deen Dayal Upadhyaya junction.

The project, supposed to be completed by 2019, was only 20% complete, Indian Railways said.

While officials denied the decision as having any link to the ongoing India-China standoff, Indian Railways stated that they were facing several issues with the company.

These included slow progress and the company's reluctance to provide the technical details of electronic equipment and design of electronic interlocking.

A high-ranking official in India's Telecom Department said that the department is advising state-owned telecom companies not to use Chinese equipment when upgrading 4G equipment. Sources confirmed that no Chinese companies would be taken in the reworked tender related to the purchase of 4G equipment.

India and China have been in a border standoff since the last week of April in the Galwan Valley and Pangong Tso. Beijing objected to infrastructure development by New Delhi along the Line of Actual Control and the situation has since escalated, culminating in Monday's face-off in which 20 Indian army soldiers were killed.