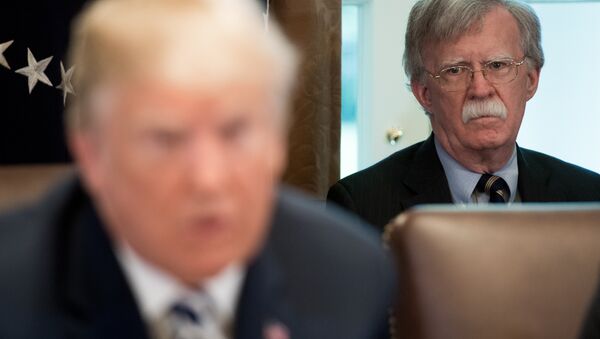 Even though US President Donald Trump may want to block the publication of former national security adviser John Bolton's upcoming book, he is unlikely to be successful due to First Amendment rights that prohibit prior restraint, Dan Kovalik, a human rights and labor lawyer, told Sputnik’s Loud & Clear Wednesday.

The upcoming memoir is titled “The Room Where It Happened” and is described by its publisher Simon & Schuster as “the book Donald Trump doesn’t want you to read.”

“Trump could try to sue to stop the publication, though there is a lot of precedent that’s gone back many years that the courts - in particular the Supreme Court has interpreted the First Amendment very broadly. And they are much against what are called prior restraints of speech - that is, stifling books or other types of speech to prevent them from coming out or being said, even though maybe you could challenge some things after they were said or after the book was released,” Kovalik, who is also the author of the book “The Plot to Control the World: How the US Spent Billions to Change the Outcome of Elections Around the World,” told Loud and Clear host John Kiriakou.

“I doubt whether Trump would win that case to prevent the book from coming out, but my guess is he may attempt to to at least delay it - for example, until after the November election,” Kovalik added.

On Tuesday, the US Justice Department filed a civil lawsuit to block the publication of Bolton’s memoir claiming that it compromises national security because it contains classified information which is "in clear breach of agreements he [Bolton] signed as a condition of his employment and as a condition of gaining access to highly classified information."

The lawsuit was most likely filed as a civil action rather than a criminal one, which would essentially amount to espionage charges, so as to prevent alienating Trump supporters, Kovalik noted.

“It’s a risky move for Trump, because first of all, Bolton has been a longtime ally of the Republicans and of Trump. He could really alienate a lot of his supporters by doing that. And also it may show, if he doesn’t do it, that he lacks the courage of his conviction - that is, that he really doesn’t really think that anything in there really is classified, which is probably the case that it’s not. I would be surprised if he went that far and brought criminal charges,” Kovalik noted.

Bolton, who was part of Trump's administration between April 2018 and September 2019, was initially slated to publish "The Room Where It Happened" in early 2020. However, the book's sale date was pushed back due to several rounds of review by the National Security Council for classified information. The book is now set to be published on June 23.

Despite the Justice Department’s attempts at blocking the book’s publication, it’s most likely still going to be published next week, Kovalik said.

“It seems like John Bolton has gone through the proper channels to get review of it,” Kovalik noted.

Sputnik reported earlier Wednesday, citing the Washington Post, that Bolton in his book claims, among other things, that Trump sought help from Chinese President Xi Jinping with his 2020 reelection campaign. In his memoir, Bolton wrote that he would have liked to “print Trump’s exact words, but the government’s prepublication review process has decided otherwise.”