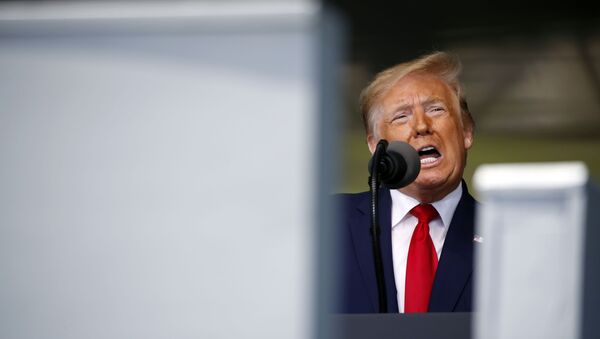 The standoff between Donald Trump and his former national security adviser John Bolton is sparked by the forthcoming release of Bolton's book that reportedly contains juicy details on Trump and his foreign policy. Accused of attempting to reveal classified information, Bolton faces a federal lawsuit that seeks to block his book from being released.

US President Donald Trump, in an interview with Fox News, claimed that his former-national security adviser, John Bolton, "broke the law" by writing the book "The Room Where It Happened". Trump has accused Bolton of revealing "highly classified information", for which "he did not have approval". '

Trump then expressed his gratitude to Rep. Lighthizer for attempting to refute allegations that POTUS asked Chinese President Xi Jinping to ensure the US leader gets re-elected. Trump also insisted that "nobody has been tough on China like me".

"He broke the law! He was a washed up guy, I gave him a chance... This is highly classified information, and he did not have approval", Trump stated.

“He broke the law. … It’s highly classified information and he did not have approval.”

On April 27, an NSC official said the book did not contain classified information.

​Trump's remarks come amid the US Department of Justice seeking a temporary restraining order to block Bolton's book from being published, echoing the accusations of disclosing classified information and saying that the book could "damage national security" of the United States.

Bolton's publisher shrugged off the federal lawsuit filed against the former national security adviser as one more effort by Trump to "quash the publication of a book it deems unflattering to the President".

Despite the lawsuit and the ongoing conflict with the White House, the book will be released on 23 June, while several media outlets have already revealed some sneak-peeks.