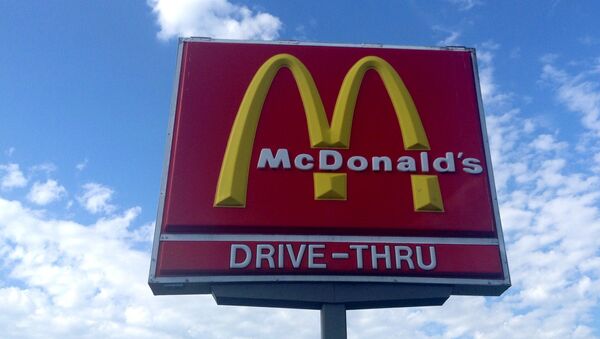 CC BY 2.0 / Flickr / Mike Mozart /
Subscribe
Netizens are attempting to make sense of an emotional US cop’s viral plea, in which she alluded to McDonald’s employees possibly poisoning her food amid nationwide calls for police reform.

Most McDonald’s meltdowns are related to the ever-broken ice cream machine, but the latest viral incident involved a delayed Egg McMuffin and an alleged officer’s anxiety at the Golden Arches.

According to the cop, she paid for her Egg McMuffin meal in advance, presumably giving the fast-food restaurant ample time to have the sandwich prepared. However, things took a turn when she learned that her order was delayed.

Stacey who has been a cop for 15 yrs went to @McDonalds She paid for it in advance and this is how she gets treated for being a cop😢😡 Come on America. We are better than this. pic.twitter.com/IcudsNfVLY

“A girl comes out with my coffee - and just the coffee - and she hands it to me and I have my window down,” Stacey said, getting choked up. “So I told her, I said, ‘Don’t bother with the food, because right now I’m too nervous to take it.

“It doesn’t matter how many hours I’ve been up, it doesn’t matter what I’ve done for anyone. Right now I’m too nervous to take a meal from McDonald’s, because I can’t see it being made,” she added.

She went on to assert that she has spent 15 years in the police force and “never, ever had such anxiety about waiting for McDonald’s drive-thru food.”

“I don’t hear thank you enough anymore,” she concluded, urging those watching to express gratitude to an officer.

As of this article’s publication, the now-viral video has amassed more than 8.6 million views and attracted a variety of takes from netizens - many of whom juxtaposed Stacey’s experience and chosen career as an officer with the systemic racism endured by black Americans.

Black woman: gets murdered in her own home.
White woman: cries about not getting her Egg McMuffin on time.#BreonnaTaylor #McDonalds pic.twitter.com/npgq3U7ji2

As far as I'm concerned there are two kinds of cops today.

1) The cops who murder unarmed Black citizens like it's a sport.
2) The cops who cover up for the killer cops. pic.twitter.com/McrNk0ixEE

If a one minute delay on your McMuffin causes you to break down crying because you assume it’s being poisoned... you shouldn’t have a gun.

Citing her emotional behavior and paranoia, many Twitter users argued that, despite being a reported 15-year veteran of the police force, the department ought to revisit whether she is mentally fit to carry a firearm.

When someone is in distress (regardless of how it’s presented) & says “I don’t know how much more I can take” while possessing a gun, they’re not only a danger to the public, they’re a danger to themselves. McDonalds can’t help her.

I’ve seen anxiety and I know what it can do to people, if she’s really this anxious about a mcmuffin then her anxiety would drastically impact her performance as an officer and she should be removed from that position. If she is still a cop by the end of the week she’s lying https://t.co/C4h7gYnnXs

STOP! McDonalds does this ALL THE TIME when they are busy and yes they mess up orders too. This police officer needs her gun taken away and therapy because she needs help. Mental Health is something police officers don't get because they are afraid of the impact on their job.

Emotionally deconstructing to this extent - because your delusional paranoia screamed "they're poisoning my McMuffin!" - means you're also unbalanced enough to impulsively unload a clip into an innocent out of irrational fear.

Time for her to get a desk job and lots of therapy.

The last time I went to Chipotle, the soda fountain was broken. Clearly this is the work of Soros and the Deep State.#McMuffin #McMuffinStrong

McMuffin Karen wanna be oppressed so bad. How many times McDonalds got y’all order wrong? How many times y’all had to wait a couple extra minutes? Did you cry? They tryna make it seem like fast food workers are intentionally trying to poison cops, so they can get sympathy. FOH

LMFAOOOOOO imagine crying because the ONLY oppression you’ve ever experienced in your life is having to wait for your McMuffin to be made 😂😂😂😂😂😂 #ACAB https://t.co/24SltkZd5h

However, a handful of netizens appeared to be in her corner. User @KathyRenze claimed that Stacey’s emotions are justified and that the McDonald’s in question was “sending her a message” by forcing her to wait.

Though little is known about Stacey or her thought process, her alleged experience comes on the heels of a New York Police Department probe into the alleged poisoning of three officers’ milkshakes at a local Shake Shack. Despite the officers’ claims, the investigation found “no criminality” on the part of the restaurant’s employees.