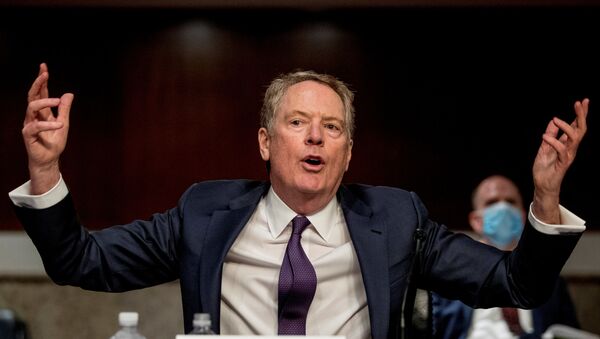 In his to-be-published tell-all book John Bolton, Trump's former national security adviser, according to an extract revealed by The Washington Post, claimed that the president asked Chinese leader Xi Jinping to ensure that POTUS was re-elected in the upcoming 2020 presidential race.

Representative Adam Schiff tweeted that Bolton "might be an author, but he's no patriot" and denounced him for "saving for the book" what he could have reveal if he had testified during the Trump impeachment.

Bolton’s staff were asked to testify before the House to Trump’s abuses, and did. They had a lot to lose and showed real courage.

When Bolton was asked, he refused, and said he’d sue if subpoenaed. Instead, he saved it for a book.

Bolton may be an author, but he’s no patriot.

​Bolton's revelations, soon to be released in his book, "The Room Where It Happened", were published by The Washington Post earlier. According to the extract, the ex-Trump administration appointee claimed that the president "pled with Xi to ensure he'd win" in the coming US presidential elections, praising China's "economic capability" to influence the campaigns.

“He then, stunningly, turned the conversation to the coming US presidential election, alluding to China’s economic capability to affect the ongoing campaigns, pleading with Xi to ensure he’d win. He stressed the importance of farmers, and increased Chinese purchases of soybeans and wheat in the electoral outcome. I would print Trump’s exact words but the government’s prepublication review process has decided otherwise", Bolton writes.

For his written assertions in his book, Bolton is now at the receiving end of a federal lawsuit claiming his autobiographical tale would reveal classified information, which he and his representatives have consistently disputed.

Despite the unrest and concerns, the book is set to go on sale on Tuesday, 23 June, as Bolton's publisher, Simon & Schuster, shrugged off the lawsuit as a "long running series of efforts by the Administration to quash publication of a book it deems unflattering to the President", noting that the right to tell the story is protected by the First Amendment.