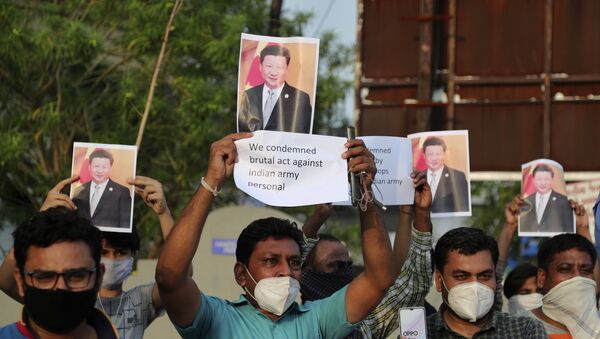 New Delhi (Sputnik): In a dramatic turn of events, the Indian and Chinese armies clashed at a disputed territory in eastern Ladakh on Monday night. Per Indian Army sources, 20 soldiers including a commanding officer were killed and an unspecified number of troops were injured or missing. There were also reports of casualties on the Chinese side.

India’s main opposition party Congress has questioned the silence of Prime Minister Narendra Modi over the violent clashes between the armies of India and China in the Ladakh region. Former Chief of the Congress Party, Rahul Gandhi in a tweet on Wednesday said, "Enough is enough. We need to know what has happened".

Why is the PM silent?
Why is he hiding?

Enough is enough. We need to know what has happened.

How dare China kill our soldiers?
How dare they take our land?

The violent clashes, the worst in several decades between the two countries, occurred as the sides were in the process of "de-escalation" in the Galwan area after a month-long standoff at several points along the de-facto border known as the Line of Actual Control (LAC).

The Indian Army has not given an official account of the clashes, but only confirmed three deaths, including that of a commanding officer.

"In the late evening and night of 15th June 2020 a violent face-off happened as a result of an attempt by the Chinese side to unilaterally change the status quo there. Both sides suffered casualties that could have been avoided had the agreement at the higher level been scrupulously followed by the Chinese side", said the Indian External Affairs Ministry in a statement.

On the other hand, Chinese Foreign Ministry spokesman Zhao Lijian told reporters in Beijing that there was a violation of a consensus reached by the two sides.

"What’s shocking is that on 15 June, the Indian side severely violated our consensus and twice crossed the border line and provoked and attacked the Chinese forces, causing a violent physical confrontation between the two border forces", said Lijian.

Though both countries had accepted LAC as the de-facto border in 1993, they still have differences leading to numerous flare-ups.

The LAC runs through land for the most part, but also through Pangong Tso, a 135-kilometre, narrow, deep and landlocked lake in eastern Ladakh, which covers a total area above 700 square kilometres. India controls the 45-km western portion of the lake.