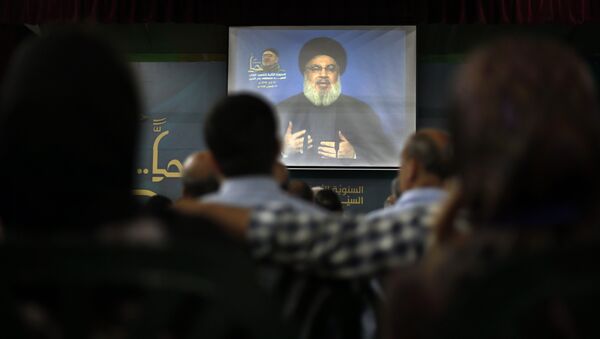 The Caesar Act, signed by US President Donald Trump in December 2019, is to come into force on Wednesday, imposing new sanctions against the Syrian government and anyone who does business with Damascus.

The head of the Lebanese Hezbollah, Hassan Nasrallah, said Tuesday that the new US sanctions against the Syrian government are aimed to starve not only Syria, but neighbouring Lebanon as well. Referring to the Caesar Act, set to come into effect on Wednesday, Nasrallah described it as the Trump administrations “last weapon” against Damascus.

"The Caesar Act aims to starve Lebanon just as it aims to starve Syria. Syria has won the war… militarily, in security terms and politically,” he said during a televised speech.

Nasrallah also lambasted the White House for orchestrating a crisis of Syrian currency, promising that the Syrian allies would not leave its side. He called on the Lebanese government to not submit to the new US law.

“The allies of Syria, which stood by its side during the war… will not abandon Syria in the face of economic warfare and will not allow its fall, even if they are themselves going through difficult circumstances,” he said.

The Caesar Syria Civilian Protection Act envisages sanctions against the Syrian government of Bashar al-Assad and anyone who does business with it, thus financially restricting a large part of Syrian economic activity. The move also received criticizm from such countries as China and Iran, as the Chinese envoy to the UN denounced the imposition of new sanctions amid the COVID-19 pandemic as "inhuman". Tehran has vowed to strengthen economic cooperation with Syria in the light of the new US sanctions.

The US ambassador to the United Nations, Kelly Craft, outlined that the US is committed to taking decisive steps to prevent Assad's government from "securing military victory" in Syria, threatening to only enhance pressure and sanctions against the country if it does not submit.

"The Assad government has a clear choice to pursue political path established in Resolution 2254 or it will leave the United States with no other choice but to continue withholding reconstruction funding and impose sanctions against it and its financial backers", Craft said.

Syria has been in crisis since 2011, when US sanctions against Assad's government were initially introduced. The ongoing war caused a massive humanitarian crisis and refugee migration of an estimated 12 million displaced that has deeply affected Europe, the Baltics and Turkey. Since then, restrictions have been expanded, now including 273 individuals and 70 Syrian organizations.

The US-led coalition in the country has been carrying out anti-terrorist operations since 2014, without the approval of Assad's government or the UN Security Council.