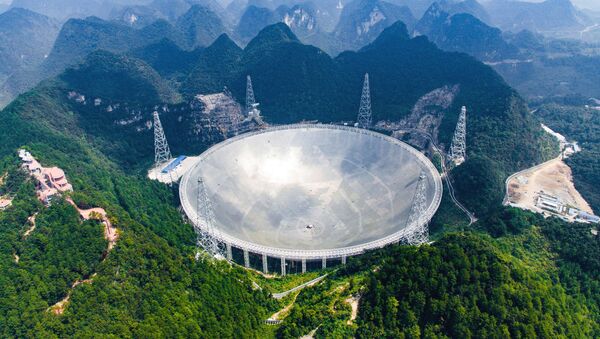 The discovery, recently published in the Astrophysical Journal Letters, was made by an international team led by scientists including Zhu Weiwei and Li Di at the National Astronomical Observatories of the Chinese Academy of Sciences (NAOC).

FRBs, mysterious radio signals from outer space, are usually one-off bursts, and only very few of them emit repeated flashes. The FRBs captured by telescopes mostly have a single-peaked structure from which a sudden increase of photons can be spotted.

The entire process likens a flash of sudden lightning, which brightens the sky in a short and transient moment before it darkens. However, a multi-peaked FRB flashes two to three times in a row or more.

According to Zhu, the newly discovered FRB shows a multi-peak pulse profile with three peaks at an interval of approximately five milliseconds, and the energy released by the first pulse outshined the latter two.

The pulse structure of the new burst is similar to FRB 121102, the first repeating event observed by astronomers, Zhu said.

"The pulse signal is estimated to have transmitted for around 10 billion years before being spotted by FAST on Nov. 23, 2018," Zhu explained.

Li Di, who is also chief scientist of FAST, attributed the discovery to the superior sensitivity of the telescope. Li said, just like an optical telescope, the bigger the calibre is, the more sensitive a radio telescope.

According to Li, the new discovery fully showcases FAST's high sensitivity and great capacity, as FRB 181123 is just like a very light touch of colour on a starry canvas.

In 2018, FAST detected one of the faintest millisecond pulsars ever recorded, while the telescopes of many other countries failed to catch it, he added.

"We embarked on the FRB research in 2015," Li said. "However, despite its relatively late start, FAST's new discovery has displayed its unique advantages in picking up extremely weak signals from deep space."

According to Li, the signal is probably derived from the period when the largest number of fixed stars appeared in the evolution of the universe.

"We will strengthen our follow-up research by using FAST to shed light on the origin and mechanisms of FRBs," the scientist added.

This article was originally published in the Science and Technology Daily