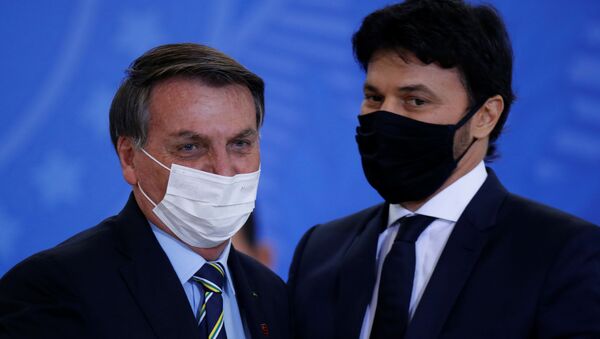 With over 920,000 confirmed cases of the COVID-19 novel coronavirus and at least 45,000 related deaths, the highly contagious virus is far from “under control” in Brazil. One expert tells Sputnik that despite this and Brazilian President Jair Bolsonaro’s lack of leadership the self-organization of vulnerable Brazilians persists.

“They clearly see the pandemic as an opportunity,” Juliana Moraes, executive director of the Washington Brazil Office, a project of the US Network for Democracy in Brazil, told Loud and Clear producer Nicole Roussell on Tuesday. Moraes spoke to Roussell regarding those elite individuals who hold power in Brazil.

A May decision by Brazil’s Supreme Court resulted in the release of video footage from an April 22 closed-door Cabinet meeting regarding the novel coronavirus. Environment Minister Ricardo Salles is overheard stating that Brazil’s COVID-19 outbreak provides a distraction for Bolsonaro’s government to “run the cattle herd” through the Amazon, “changing all the rules and simplifying standards.”

The relevant segment begins around the 13:00 timestamp.

Moraes noted that Salles’ unfiltered comment is one possible approach of the government, as is the implementation of necropolitics in Brazil, where politicos are allowing Brazilians to die rather than intervening and putting in place preventative COVID-19 measures.

She explained that “some of the richest in Brazil” are currently claiming that the novel coronavirus is “controlled,” despite the fact that those outside of the middle class are actively suffering and need assistance.

“There is a crisis, we sympathize with bereaved families, but it is managed,” Walter Braga Netto, the head of the office of the president’s chief of staff, said on Tuesday, as reported by Reuters.

Braga Netto is one of several government officials overseeing the country’s response to the pandemic. A record 34,918 new cases of the novel coronavirus were reported in Brazil on Tuesday.

Another associated attempt occurred when the Health Ministry removed the cumulative COVID-19 statistics from its website, and Bolsonaro claimed alternatives were being considered to "improve the reporting of cases.”

The Brazilian president’s efforts were countered by yet another Supreme Court decision, which this time ordered the government to “release the pandemic data, as before, without make-up or manipulation,” according to Randolfe Rodrigues, the opposition leader in the Federal Senate.

Moraes noted that with Bolsonaro’s government ignoring the humanitarian needs of its own people amid the pandemic, those in the country’s favelas have been forced to find their own solutions, such as “self-organizing.”

She detailed that Rio On Watch, UNEafro and the Homeless Workers’ Movement (MTST) are among those self-organizing groups.

As the pandemic looms, the similarities between the US and Brazil’s governmental responses have become clear - such as both US President Donald Trump and Bolsonaro touting hydroxychloroquine as the miracle cure for COVID-19.

Hannah Dickinson, an associate professor at Hobart and William Smith Colleges and an organizer with the Geneva Women’s Assembly, asserted to Roussell that race, in both the US and Brazil, is a major factor when discussing the impact of the novel coronavirus.

Within the US, the COVID-19 mortality rate among black Americans is 2.3 times higher than that of white or Asian Americans, according to the APM Research Lab.