Kim Yo-jong is the granddaughter of NK founder Kim Il-sung, the daughter of former North Korean leader Kim Jong-il, and the younger sister of Kim Jong-un, the current supreme leader. Officially mentioned for the first time on 9 March 2014, she was later identified as a senior official in the Central Committee of the Workers' Party of Korea.

North Korean politician Kim Yo-jong, 30, is the director of the Propaganda and Agitation Department of the ruling Workers' Party and is therefore responsible for her brother's public image. State media recently confirmed that Kim Yo-jong is now in charge of relations with South Korea.

She is considered to be a powerful political figure in North Korea and a right-hand woman to her brother since she has accompanied him on numerous high-level meetings, including the denuclearisation summits with US President Donald Trump and South Korean President Moon Jae-in. Given her influence, she has even been nicknamed North Korea's "most powerful woman" by the media.

She also served as an alternate member of the Politburo of the Workers' Party of Korea from 2017 to 2019, and was reappointed to the role in April 2020.

Check out Sputnik's gallery to see what else we know about the powerful sister of North Korean leader Kim Jong-un. 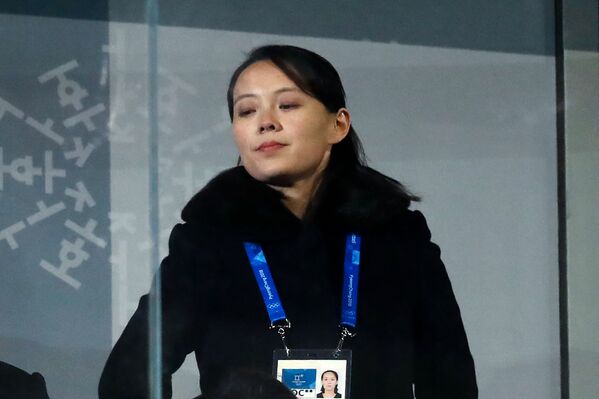 1/12
© AFP 2022 / Odd Andersen
She is the youngest of seven children, and the only daughter of Kim Jong-il and his Japanese-born consort Ko Yong-hui. Yong-hui is also the mother of Kim Jong-un.
Above: North Korean leader Kim Jong-un's sister Kim Yo-jong attends the opening ceremony of the 2018 Pyeongchang Winter Olympic Games at Pyeongchang Stadium on 9 February 2018. 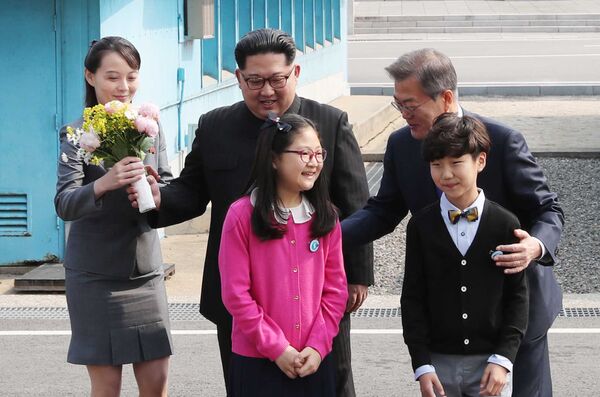 2/12
© AFP 2022 / Korea Summit Press Pool
Kim Jong-il called her “sweet, sweet Yo-jong” and “Princess". He was very proud of her and when she expressed an interest and aptitude for politics, he told visiting dignitaries about it.
Above: Kim Yo-jong (L), sister and close adviser to North Korean leader Kim Jong-un (top C), brings a bouquet of flowers as he and South Korean President Moon Jae-in (R) pose with children after meeting at the Military Demarcation Line that divides their countries ahead of their summit at Panmunjom on 27 April 2018. 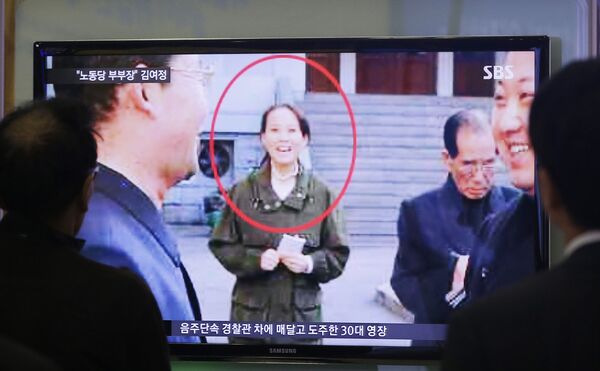 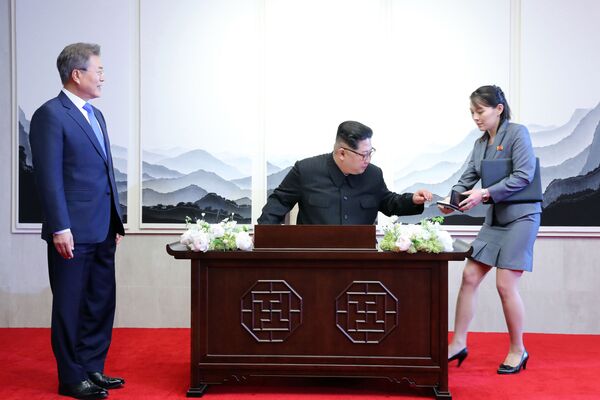 4/12
© AFP 2022 / Korea Summit Press Pool
Kim Yo-jong has been called Jong-un’s “Ivanka” or “North Korea’s Ivanka” by the South Korean media as it is believed that her brother often seeks her advice.
Above: North Korean leader Kim Jong-un (C) prepares to sign the guest book next to his sister Kim Yo-jong during the Inter-Korean summit with South Korean President Moon Jae-in (L) at the Peace House building on the southern side of the truce village of Panmunjom on 27 April 2018. 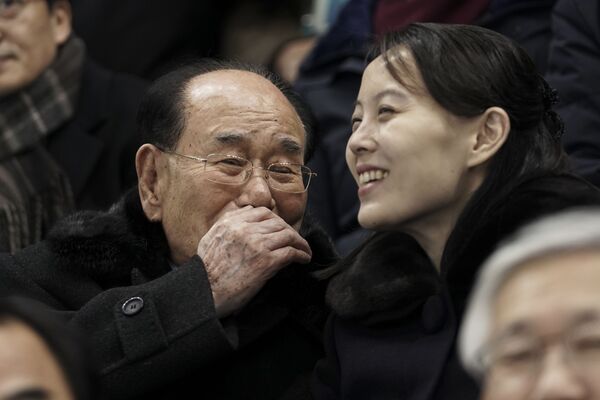 5/12
© AP Photo / Felipe Dana
Some Japanese and South Korean media reports say Kim is married to a finance official and they have at least one child.
Above: Kim Yo-jong, right, and North Korea's nominal head of state Kim Yong-nam, talk as they wait for the start of the preliminary round of women's hockey game between Switzerland and the combined Koreas at the 2018 Winter Olympics in Gangneung, South Korea, 10 February 2018. 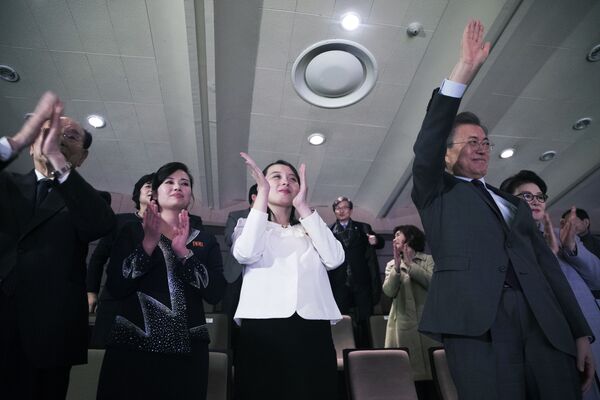 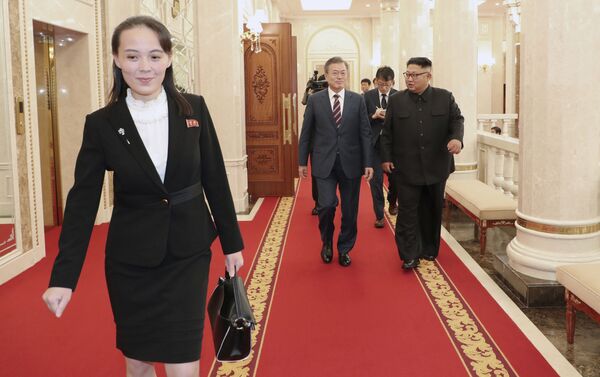 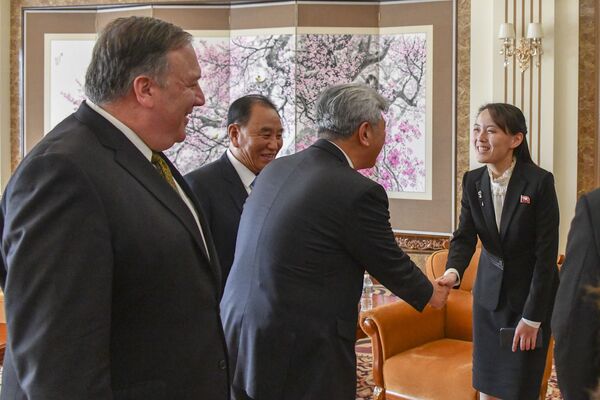 8/12
© Photo : Public domain / U.S. Department of State
In January 2017, the US Treasury Department added seven senior North Korean officials, including leader Kim Jong-un’s sister, to its sanctions list because of "human rights abuses and censorship by the communist nation".
Above: Secretary of State Michael R. Pompeo receives photos from his meeting with Chairman Kim Jong-un from Chairman Kim's sister, Kim Yo-jong, in Pyongyang, the Democratic People's Republic of Korea on 7 October 2018. 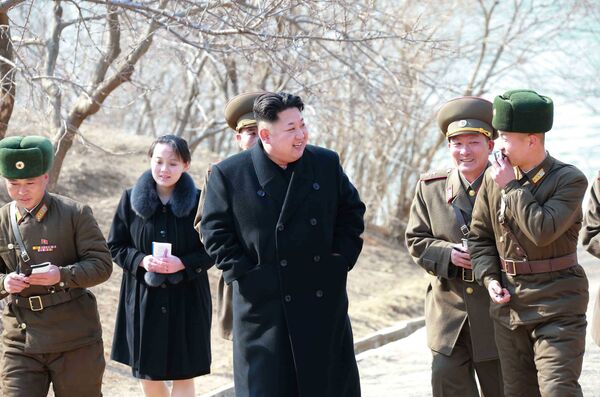 9/12
© AFP 2022 / KNS / KCNA
Kim Yo-jong is believed to have a close relationship with her brother Kim Jong-un. She regularly accompanies the North Korean leader on his "field guidance" trips.
Above: North Korean leader Kim Jong-un (C) is inspecting the Sin Islet defence company in Kangwon Province, while Kim Yo-jong (2nd L), vice department director of the Central Committee of the Worker's Party of Korea (WPK) and the younger sister of Kim Jong-un, follows him on 12 March 2015. 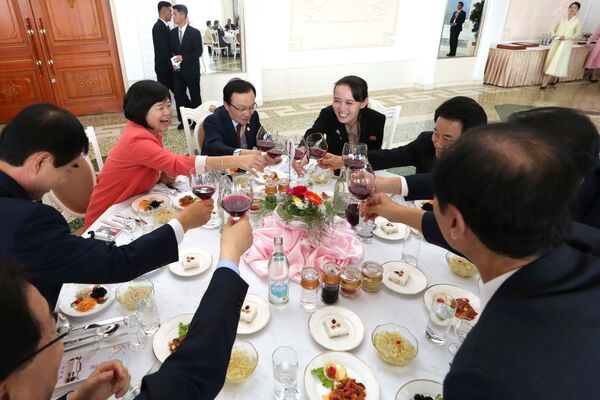 10/12
© AFP 2022 / Pyeongyang Press Corps
The BBC called Kim Yo-jong the "secret weapon of North Korea" and the "PR Queen of Pyongyang", recalling how she aroused the sympathy of the South Korean media when she arrived in Seoul.
Above: Kim Yo-jong (C) sits with members of a South Korean delegation during a lunch at the Okryukwan cold noodle restaurant in Pyongyang on 19 September 2018. 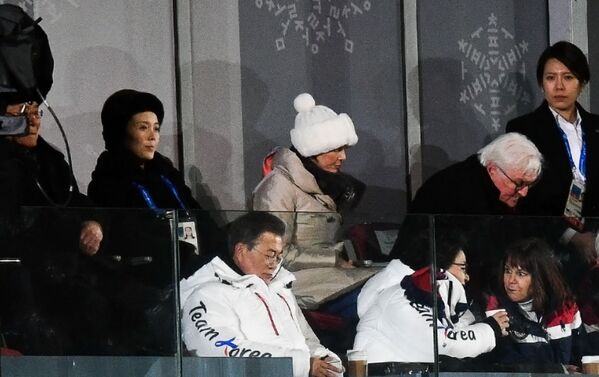 11/12
© Sputnik / Aleksander Vilf
/
Go to the photo bank
On 9 February 2018, Kim Yo-jong attended the 2018 Winter Olympics opening ceremony in Pyeongchang, South Korea. This was the first time that a member of the ruling Kim dynasty had visited South Korea since the Korean War. 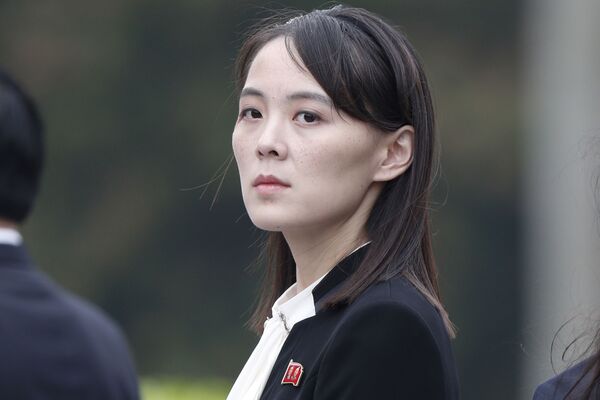 12/12
© AP Photo / Pool / Jorge Silva
Kim Yo-jong is about 30 years old as her exact birth date remains unknown. According to the US Department of the Treasury, she was born in Pyongyang on 26 September 1989 while South Korean sources place her birth on 26 September 1987.
Above: Kim Yo-jong attends a wreath-laying ceremony at the Ho Chi Minh Mausoleum in Hanoi, Vietnam, Saturday, 2 March 2019.
Newsfeed
0
Access to the chat has been blocked for violating the rules . You will be able to participate again through:∞. If you do not agree with the blocking, please use the feedback form
The discussion is closed. You can participate in the discussion within 24 hours after the publication of the article.
To participate in the discussion
log in or register
loader
Chats
Заголовок открываемого материала