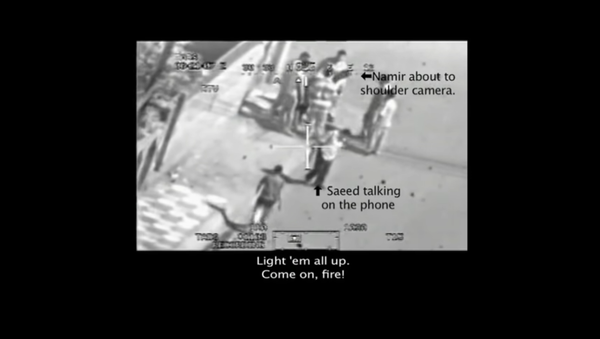 Thirteen years after two of his colleagues were killed by US soldiers who covered up the murder, Dean Yates, the former Reuters bureau chief in Baghdad, has come out in defense of WikiLeaks co-founder Julian Assange, who published leaked footage showing the truth, but is now indicted under the Espionage Act for it.

Yates, who worked closely with both photographer Namir Noor-Eldeen and driver/fixer Saeed Chmagh, the two Reuters journalists who were killed in Iraq on July 12, 2007, told the Australian Broadcasting Corporation’s (ABC) RN Breakfast podcast on Tuesday that “the truth needs to come out.”

The two were killed, alongside nine Iraqi citizens, by a group of US Army attack helicopters that raked the Baghdad street corner with cannonfire as well as a van that stopped to help the wounded. However, the US Army told the public one version of the story and Reuters another, neither of which was the complete truth.

“I was given an off-the-record briefing a couple of weeks after they were killed, where they showed me less than a few minutes of the tape, which just showed the leadup to the helicopter opening fire for the first time. And it was in that moment that I saw that there was no firefight taking place,” as the Army had officially claimed, Yates told ABC.

“Because that was an off-the-record briefing, and as journalists, we are supposed to keep off-the-record agreements, a year later, when we had been trying to get the tape from the Pentagon, I suggested to my editors that we break that off-the-record agreement because I felt that we’d given the US military enough time to give us the tape,” he said, noting the editors declined his suggestion. “We were being honorable with the US military - they were not being honorable with us,” Yates said.

“It was only when Chelsea Manning found the tape, gave it to WikiLeaks, gave it to Julian Assange, that the world saw through their own eyes what was on that tape and what the war in Iraq really looked like,” he said.

In an interview published by the Guardian over the weekend, Yates described how the events of July 12, 2007, altered his life, plunging him into post-traumatic stress and suicidal depression for years after.

Yates told ABC he couldn’t bring himself to watch the entire “Collateral Murder” tape until several years after it was released in 2010. He left Reuters earlier this year.

In the video, gunners in one of the helicopters can be seen and heard jeering and bantering as they gun down the journalists and bystanders, even urging Chmagh that “all you got to do is pick up a weapon,” so as to justify his own death.

“The words that kept forming on my lips were ‘cold-blooded murder,’” Yates told the Guardian.

The journalist told ABC it was “extraordinary” that the US Justice Department’s indictment against Assange, which centers around Manning’s passing of stolen US government documents to Assange, doesn’t mention “Collateral Murder” itself.

Yates said he thought the tape was absent from the indictment because “the US government knows how embarrassing it is. They know that there’s a potential war crime on there, and I just don’t think they want this tape in public scrutiny. They don’t want it in a court of law, because they know how damaging it could be.”

“There’s been a lot of debate over whether Julian is a journalist or not. My view is that there’s a process to journalism: the gathering, checking, rechecking of source material, verifying that material, presenting that material to an audience in a context and in a way that’s digestible and a way that potentially does not put anyone’s safety at risk.”

“So I don’t think Julian is a journalist, but I think that misses the point: in Trump’s America, if they put Julian on trial and jail him - and he faces up to 175 years - that would set a shocking precedent for going after anyone - of any nationality, mind you - who accesses or publishes classified material that is in the public interest. You could be an unknown hacker living in New Zealand, or you could be the New York Times.”

“The chilling effect that the jailing of Julian Assange could have on whistleblowing and investigative reporting is something that the world, I think, really needs to be very much aware of. That’s why I support bringing Julian home to Australia.”

Assange was arrested in London in April 2019 and charged by the US Justice Department under the Espionage Act for supposedly having helped Manning break into the computer from which she stole the documents that WikiLeaks subsequently published, including the “Collateral Murder” tape. He is presently engaged in a fight against extradition from the UK to the US, even as his health steadily worsens.