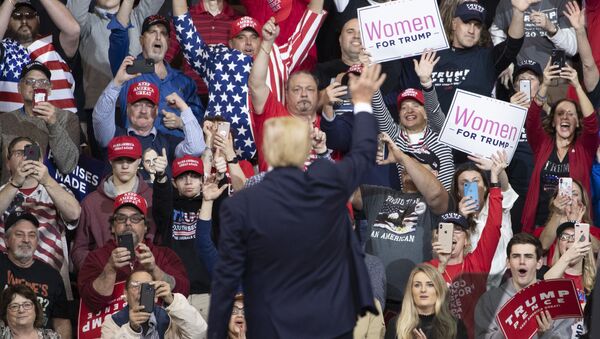 The revelations, if they see the light of day, would be the first ever blow to the president from inside his own family. Donald and Mary Trump had a feud 20 years ago that resulted in a court battle over the estate of the president’s father, Fred C. Trump.

Mary Trump is set to publish a tell-all book about her uncle, US President Donald Trump, The Daily Beast reports, citing sources with knowledge of the situation.

It is understood that the book, titled Too Much And Never Enough, will come out on 11 August, just two weeks before the Republican National Convention in Jacksonville, where Donald Trump is expected to officially accept the party’s presidential nomination.

Mary, 55, will spill “harrowing and salacious” details about the president, insiders told The Daily Beast, and will come out as a primary source for The New York Times’ 2018 investigation which accused Donald Trump of tax evasion and sketchy business practices.

That investigation claimed that Trump had received at least $413 million in today’s dollars from his father, the real estate mogul Fred C. Trump, and some of them using fraudulent tax schemes.

That report noted that Trump would not face criminal prosecution because the statute of limitations had expired, but he would still be subject to civil fines and, perhaps more importantly, his ‘self-made billionaire’ image would sustain some damage. Trump denied fraud or tax evasion and threatened to sue the newspaper.

The investigation, which won a Pulitzer Award in 2019, was based on a trove of confidential tax returns and financial records; Mary Trump is now expected to reveal that it was her who supplied the documents to the Times journalists.

Mary Trump has largely kept away from public spotlight, although she sat for an interview with the New York Daily News in 2000 after a court battle over Fred C. Trump’s estate. In a separate suit, she accused Donald Trump of ending medical coverage for a baby cousin after her family challenged Fred Trump’s will.

“Given this family, it would be utterly naive to say it has nothing to do with money,” she said. “My aunt and uncles should be ashamed of themselves,” Mary Trump said in the 2000 interview. “I’m sure they are not.”

Donald Trump replied that he cut the coverage because he was “angry” over the lawsuit challenging his father’s will, saying later it was settled “very amicably”.

Mary Trump is the daughter of Donald Trump’s older brother Fred, a pilot who died of complications due to alcoholism at the age of 42 in 1981.

According to the Daily Beast, the book will also reflect on Fred’s alcoholism, including “allegations that Donald and Fred Trump Sr. contributed to his death and neglected him at critical stages of his addiction.”