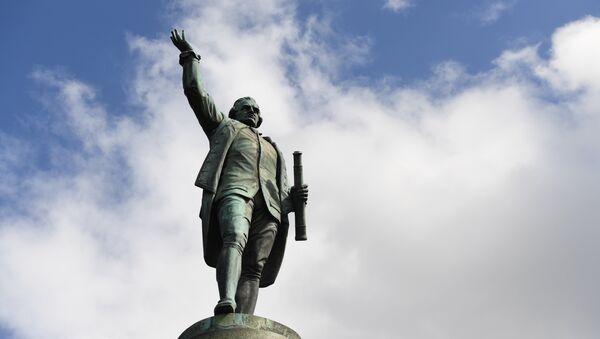 © AFP 2021 / WILLIAM WEST
Subscribe
Two statues of Captain James Cook were vandalised over the weekend after indigenous and Black Lives Matter activists came out in opposition to the legacy of colonialism and slavery in Australia and across the world.

Gladys Berejiklian, the premier of New South Wales, described the actions as "un-Australian" and said the "vast majority" do not condone it as she suggested the future introduction of tougher penalties.

"I wish it didn't come to this and I want to stress that it's only a very, very small percentage of the population that's engaging in this activity", she said.

Two women have been charged after spray painting a statue of Captain Cook in Sydney's Hyde Park on Saturday night. In an unrelated attack, another statue of the 18th-century explorer was hit with spray painting the eastern suburb of Randwick on Sunday morning, police have confirmed.

Someone vandalized the Captain James Cook statue in Sydney pic.twitter.com/5PRNYMIuVP

​The two suspects involved in the Hyde Park protest include 28-year-old Xiaoran Shi, who had worked part-time for the minor Greens Party.

Prime Minister Scott Morrison has been asked if he regrets his 'no slavery' comment after his claim sparked backlash.
FULL STORY: https://t.co/3l3h4hY5Og pic.twitter.com/3K44sKG7gL

​Morrison was criticised for saying there was "no slavery" in Australia when thousands of South Pacific islanders had been used as force labour on Australian sugar cane plantations during the 19th century. Indigenous Australian's were also forced to work for unpaid wages.

The Prime Minister said that concerns by activists regarding treatment in custody was a "fair issue" but that it had been "taken over by other much more politically-driven, left-wing agendas" taking advantage of the movement to "push their political causes".

James Cook has long been a contentious figure in Australia and much of the world. Born in Yorkshire in 1728, Cook joined the royal navy and later made three exploration voyages to the Pacific - claiming the east coast of what is now Australia for the British crown, circumnavigating New Zealand, before being violently killed in Hawaii.

His arrival in New Zealand led to initiation of force by his men and killed nine indigenous Maori inhabitants of the island at the hands of the explorers.

Activists today attribute the enduring legacy of the subsequent genocide and land theft of the indigenous peoples of Australia and New Zealand by Britain to Cook's first landing on the Oceanic islands.

The proposed clamping down on activists defacing of statues in Australia comes amid a worldwide exchange about maintaining effigies to historical figures involved in the slave trade or the colonial era.

After the death of George Floyd at the hands of law enforcement in the United States last month, a series of protests and riots broke out against police brutality and racism.

The demonstrations spread to the United Kingdom during which a statue of Edward Colston was toppled by protestors. A national conversation has since erupted regarding other figures who are honoured in UK cities such as Sir Winston Churchill and Henry Dundas.

000000
Popular comments
I'm not exactly clear on this one... is there a "respectful" statue vandalism?