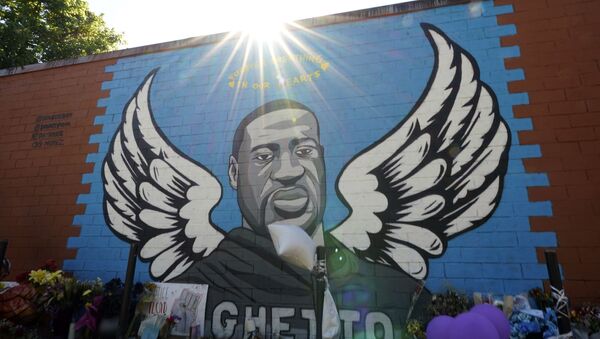 Ekaterina Blinova
All materialsWrite to the author
The Black Lives Matter protest movement over George Floyd's death has triggered a lot of questions, starting with whether the murder was really driven by any racist prejudices and why BLM ignores the tremendous progress in American society in improving the treatment of African Americans in the last decades, says US journalist Jason Goodman.

George Floyd, a 46-year old African American man who died at the hands of white policeman Derek Chauvin, has become the symbol of the Black Lives Matter's anti-racism protest, which has spilled over into the other countries of the world. One might ask whether Floyd really deserves to be revered as a new black icon akin to Martin Luther King.

Floyd Was 'a Horrible Guy Who Shouldn't be Praised'

Though the story circulated by the media is arousing feelings of sympathy and compassion among the public, there is more to it than meets the eye, according to Jason Goodman, an independent investigative journalist and the host of the podcast Crowdsource the Truth. In fact, the story behind Floyd's death may have nothing to do with racism-related police brutality, he suggests.

Despite being depicted as a civil martyr, a "gentle giant" and a hero whose funeral was broadcast by major US mainstream media channels, Floyd was no saint to begin with, Goodman highlights.

According to court records, Floyd was arrested on nine separate occasions between 1997 and 2007, mostly on drug and theft charges, with months-long jail sentences. In 2007 he was charged with aggravated robbery with a deadly weapon, for which he pleaded guilty in 2009 and was sentenced to five years in prison. The probable-cause statement says that Floyd forced his way into the residence of Aracely Henriquez and Angel Negrete where they lived with a 1 year-old toddler, placed a pistol against Henriquez's pregnant abdomen, and robbed the place together with five other black males.

Having been paroled in 2013, Floyd returned to Houston but then moved to Minneapolis to "make a fresh start". It's unclear what he meant by "fresh start", but his autopsy indicated drugs and psychoactive substances in his system on the day of his murder, including 11 ng/mL of fentanyl and 19 ng/mL of methamphetamine. On the top of this, the trigger for his deadly arrest was either the intentional or unintentional use of a counterfeit $20 bill.

Though Floyd did not deserve to be killed like that, "this [was] a horrible guy who should not be praised at all", the journalist opines.

Much in the same vein, Candace Owens, an African-American 31-year old activist, has recently warned against portraying Floyd as a new Martin Luther King: "For whatever reason, it has become fashionable and despicable, for us, the last few years, to turn criminals into heroes overnight", she said on Twitter.

Confession: #GeorgeFloyd is neither a martyr or a hero. But I hope his family gets justice. https://t.co/Lnxz0usrp5

​'Chauvin's Motivation Has Yet to be Explored'

Yet another strange circumstance, according to Goodman, is that George Floyd and his killer, Derek Chauvin, most likely knew each other: the two were working as security staff at the nightclub El Nuevo Rodeo in Minneapolis for quite a while.

Citing their former coworker David Pinney, CBS Evening News revealed last week that Floyd and Chauvin had “bumped heads” in the past. A few days later, however, Pinney changed his story by saying that he confused Floyd for another African-American employee and that he could not confirm whether Chavin and Floyd knew each other or didn't get along.

"It's a pretty small restaurant", Goodman points out. "George Floyd is six-foot-six (1.98 metres), I think it would be difficult to be in the restaurant for one night and not notice a six-foot-six guy, let alone to work there for years, and not know him."

Regardless of Pinney's flip-flopping, Philonise Floyd also assumed that his brother and Chauvin knew each other and that the murder could have been somehow related to this: "For [Chauvin] to do something like that, it had to be premeditated", Floyd told the House Judiciary Committee this week.

Derek Chauvin's alleged racial prejudice against Floyd also raises questions, according to Goodman: for ten years the former police officer has been married to Kellie Chauvin, an Asian American who was born in Laos in 1974.

"So, we've got a criminal police officer who is now accused of murder; we have a repeat offender criminal who is George Floyd who was accused of using a counterfeit [$20] bill. Both worked together at the same nightclub," the journalist sums up, asking whether we are dealing with a story of two feuding felons rather than a spiel about a racist police officer killing some random black civilian.

The relationship between the two and potential motives behind the murder have yet to be fully explored, Goodman insists, wondering if it was a mere coincidence that both Nuevo Rodeo and the police station where Derek Chauvin used to work were burned down in the riots, or an attempt to hide possible traces.

In light of this, Black Lives Matter's narrative of the racism-driven police brutality behind Floyd's death risks collapsing like a house of cards, the journalist suggests. 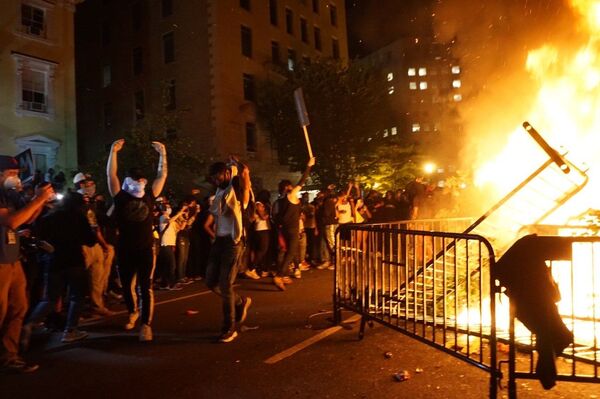 'Black Lives Matter is a Deception'

Likewise, Goodman expresses scepticism over the genuine incentives of Black Lives Matter protests which have engulfed the nation like wildfire.

"What I see with this BLM movement is a psychological trick when by naming it Black Lives Matter this name evokes an emotional response, because if you disagree with something called Black Lives Matter right away you're a racist," Goodman says, adding that "the name of the foundation is inherently divisive because it suggests that white lives don't matter, that Asian lives don't matter".

The proponents of the movement would argue that it is called "Black Lives Matter" because there have been 400 years of oppression, the independent journalist elaborates.

"Certainly slavery in the US and anywhere is atrocity and should be condemned always. But certainly what's happening today in 2020 cannot be equated to how black people in America were treated 400 years ago. It's vastly different. Even if we look at the state of race relations in the US in 1960 to today I think there has been tremendous progress," he says, adding that black CEOs of American enterprises or an African American president of the US have been a 21th century reality.

What Black Lives Matter is actually doing is not unifying people, but devaluing this historic progress and sowing further discord within the American society, according to the journalist. 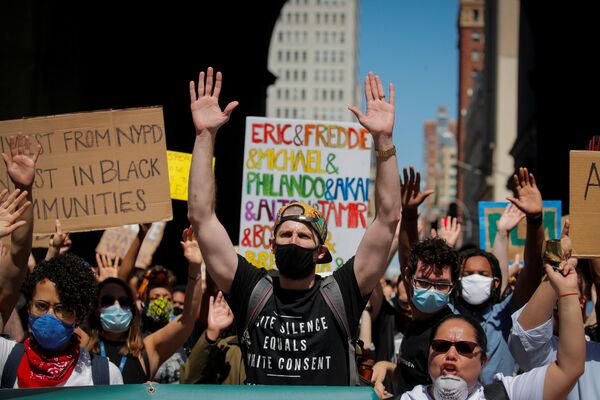 The movement, which calls itself part of "the global Black family", is actually promoting a partisan leftist political agenda which is taking its roots in the Black Panthers organisation, a left-wing Marxist socialist group, the journalist suggests.

Recently, BLM has launched a #WhatMatters2020 campaign "to maximise the impact of the BLM movement by galvanising BLM supporters and allies to the polls in the 2020 US Presidential Election". One might wonder whether BLM is following the Dems' lead especially given that ActBlue Charities which process donations to the movement is also bankrolling Democratic political efforts across the US, as American investigative journalists have recently found out.

Besides this, BLM appears to be vindictive as it is seeking to "punish" all American police officers for what happened in Minneapolis, he continues. However, while BLM is demanding that American authorities defund or dismantle altogether the US police force over brutalising black civilians, the latest studies published by The Wall Street Journal indicate that African-Americans constitute just a quarter of those killed by cops in 2019, with this ratio remaining stable since 2015.

But that is not all: Goodman poses the question as to why BLM remained largely numb over Latino NYPD officer Francisco Garcia violently beating an African-American in a social distancing arrest a month ago. During the arrest, Garcia shouted the n-word and then knelt on the man's head, as Gothamist reported on 4 May, attaching a bystander's video.