Undoing History is the Left’s Latest Fad. Will They Stop There? 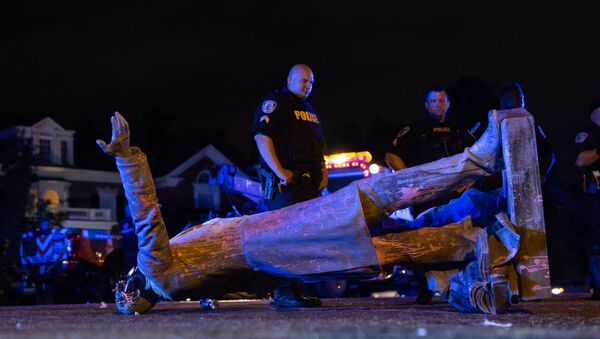 As often happens with mass movements, the international campaign for racial equality has taken on an overly simplistic tone. It can be summarised as follows: we’ve learned enough from history, let’s disavow it now.

From the United States to Australia, protesters have been toppling or defacing historical monuments they deem problematic.

What started as a campaign against systemic racism has turned into a flashmob of sorts, with activists compiling hit lists of statues that “celebrate slavery and racism.” Among the targets are Confederate monuments in the US, statues of King Leopold II in Belgium, Winston Churchill in the UK, and James Cook in Australia.

And while nobody in their right mind appears to be defending slavery or racism, the entire idea of viewing history through the lens of modern standards may be considered superficial at best.

The monuments being targeted are reminders of a murky past, a closed chapter that cannot be rewritten, but one that should be revisited once in a while.

But is this the right way to look at things? What if people go further and completely discard the complexity and nuances of the human past for the Greater Good? Well, if that were the case, there is a lot of work ahead.

Protesters in London spray-painted ‘racist’ across the statue of Winston Churchill because of his derogatory comments about Indians and black people. However, there are plenty of famous people that weren’t any better.

Take Mahatma Gandhi, for example. One of the world’s biggest peace icons after Jesus Christ and Buddha should be cancelled into oblivion according to the logic of modern anti-racism advocates.

Gandhi went down in history as a fighter against discrimination of all kinds, but in his early years he wrote that white South Africans should be “the predominating race”.

He once also said that black people are “troublesome, very dirty and live like animals” and ranted that their “sole ambition is to collect a number of cattle to buy a wife, and then pass [their] life in indolence and nakedness.” There is a statue of Gandhi in London’s Parliament Square, not far from Churchill’s. 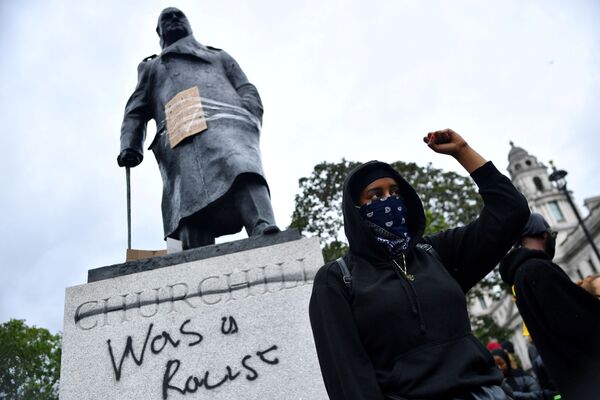 FILE PHOTO: A demonstrator reacts infront of graffiti on a statue of Winston Churchill in Parliament Square during a Black Lives Matter protest in London, following the death of George Floyd who died in police custody in Minneapolis, London, Britain, June 7, 2020.
© REUTERS / Dylan Martinez

The icon of the left, Che Guevara, was outspoken not only about imperialism, but also about black people. “The blacks, those magnificent examples of the African race who have maintained their racial purity thanks to their lack of an affinity with bathing, have seen their territory invaded by a new kind of slave: the Portuguese,” he wrote in his diaries after visiting workers’ slums in Venezuela.

“The black is indolent and a dreamer; spending his meager wage on frivolity or drink; the European has a tradition of work and saving, which has pursued him as far as this corner of America and drives him to advance himself, even independently of his own individual aspirations.” No more revolutionary merch!

Maybe protesters should also break up Ford, the company whose founder held anti-Semitic views and did business in the Third Reich. Henry Ford, who famously earned an award from Hitler, funded the publication of half a million copies of the Protocols of the Elders of Zion, a notorious anti-Semitic hoax describing the alleged Jewish plans for global domination. During WW2, Ford’s German subsidiary also used French prisoners of war as forced labourers. 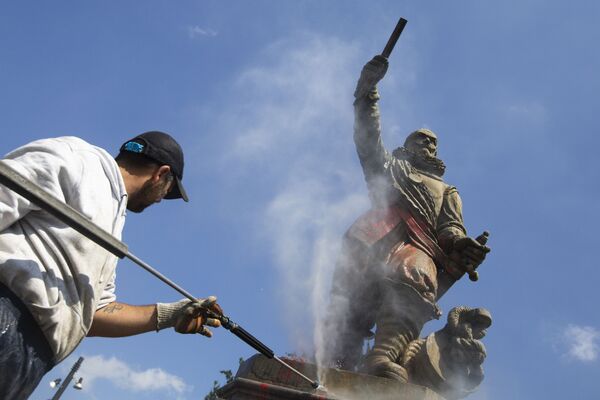 A municipal worker used a high pressure water cleaner to remove the paint from the statue of Piet Hein in Rotterdam, Netherlands, Friday, June 12, 2020. Dutch activists have spray painted the words "killer" and "thief" and daubed red paint on a statue of a man regarded by many as a naval hero from the 17th-century Golden Era of Dutch trade and colonial expansion. (AP Photo/Peter Dejong)
© AP Photo / Peter Dejong

Or how about banning the books of H. G. Wells, who once said that “those swarms of black, and brown, and dirty-white, and yellow people, who do not come into the new needs of efficiency” should “die out and disappear”? And in any case, Philip K. Dick was a better writer.

Several statues of Christopher Columbus have been vandalised or removed in the United States because it offends Black Lives Matter protesters.

“Christopher Columbus to us, as black Americans, represents a privatiser, a coloniser, a rapist, and many other things,” one American activist said.

Isn’t it also offensive that the US Declaration of Independence was drafted by a man who owned an attractive mixed-race woman and apparently fathered six of her children? Isn’t it offensive that the White House was built by a slave owner and the US capital is still named after one?

It might be generous to rename Washington, DC to Lincolnsburg, DC – after the president who single-handedly abolished slavery. Though, on second thoughts, Lincoln also initially wanted to deport black people to Africa after setting them free. Obamapolis, anyone?

Looking further back, there are plenty of righteous things to do. The Colosseum could be destroyed because it was built by slaves for their owners so that other slaves could battle each other to the death.

And the Pyramids – this symbol of oppressive patriarchy has been an eyesore for far too long. They were likely built by labourers and not slaves, but so was Winston Churchill’s statue, wasn’t it?