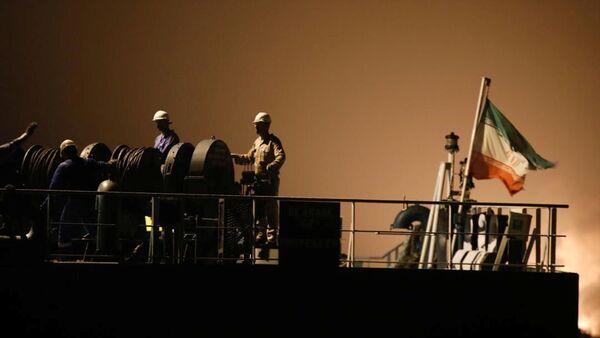 Iran has been shipping crucial energy supplies to sanctions-hit Venezuela, which is struggling both with producing gasoline and procuring it from abroad. There were concerns that US naval forces could interfere with the shipments, but the US instead sought to turn away vessels sailing under flags of convenience.

The Iranian Navy was preparing to retaliate against US commercial vessels last month in case the United States sought to halt a Venezuela-bound tanker flotilla, Iran’s Noor News agency has reported.

“According to reports received by Noor News, after increasing military threats against Iranian vessels headed for Venezuela, an order was issued to Iran’s armed forces to identify and track several US merchant vessels in the Persian Gulf and the Gulf of Oman,” the agency said, according to a translation provided by Reuters.

The report said that Iranian naval forces identified and monitored “options for reciprocal action” but did not elaborate on what these options could be.

Iranian forces last summer detained a British-flagged tanker in the Strait of Hormuz for alleged marine violations. The move came shortly after an Iranian tanker was seized in the UK-governed territory of Gibraltar on suspicion that it planned to deliver oil to Syria despite US and EU sanctions. Both vessels and their respective crews have later been released.

In May, Iran sent five tankers laden with fuel and spare parts for refineries to the gasoline-short Venezuela. Reports emerged in mid-May that the White House was considering military action to interfere with the shipments, and Iran summoned the Swiss ambassador – Trump’s postman in the Islamic Republic – to lodge a protest against the plans.

The rumour didn’t pan out, and all five vessels eventually arrived without impediment, although the US successfully turned away, under threat of sanctions, two Liberian-flagged vessels carrying Iranian energy supplies to Venezuela.

In addition, the Trump administration has warned governments around the world against making fuel shipments to Venezuela and providing port services to Venezuela-bound ships. It has also alerted ship owners, captains and insurance companies as well as ports on the route between Iran and Venezuela, such as Gibraltar.

Iran and Venezuela, two countries heavily sanctioned by Trump, have praised the May deliveries as a display of power and signalled their readiness to continue shipments if necessary.