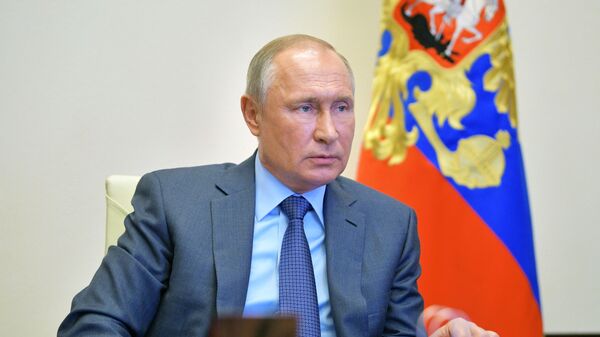 MOSCOW (Sputnik) - When addressing the ongoing George Floyd protests across the United States, Russian President Vladimir Putin said that Moscow is always against demonstrations turning violent with widespread rioting, but Russia, now and historically, has always supported the black community in their struggle for equal rights.

According to the president, the US had racial tensions for a long time, while Russia now, and the Soviet Union in the past, had always backed "the fight of African Americans" for their rights.

"If the struggle for natural rights, for legal rights, turns violent and brutal, then I see nothing good for the country here. We have never supported that," Putin said in "Vesti Nedeli" programme broadcast by Rossiya 1 TV channel on Sunday.

According to the Russian president, the "fundamental foundations" of the American democracy would help Washington to overcome the current issues.

Russia is leading the world when it comes to developing new types of weapons, including hypersonic weapons, Russian President Vladimir Putin said.

"We are not just modernizing our traditional military strength, we are developing new systems. And in this sense, we can confidently say that we are number one in the world today," Putin said.

"I always say this and now I can repeat that the leading military powers of the world will certainly have the same weapons that Russia has today, I mean hypersonic weapons. But so far since 2018, no one has had such a weapon," the president said.

Nonetheless, Putin added that Russia will most likely be able to defend itself from hypersonic weapons when other countries will develop them.

"But I think that we can pleasantly surprise our partners with the fact that when they have these weapons, with a high degree of probability, we will have a way of combating against these weapons," Putin said, adding that, as of now, no country has the ability to shoot down hypersonic missiles.

The president also said that Russia and the United States maintain approximate parity when it comes to the development of nuclear defence complex, both in terms of carriers and number of warheads, but Moscow leads in promising technologies.

Putin told Rossiya 1 TV channel that when the Soviet Union dissolved, the countries that believed that they won the Cold War tried to "reshape the world" to their benefit.

"We really did a lot [to strengthen Russia]. And in the field of developing the nuclear defence complex, we maintain approximate parity with the United States both in terms of carriers and the number of warheads, but nevertheless, we are certainly leaders in our promising technologies," Putin said.

"We are talking about the fact that at certain costs, problems, and losses, but still we are, at a normal pace, so to speak, are working to get out of this coronavirus situation confidently, with minimal losses," Putin said.

The Russian president also added that the federal government and regional authorities were working "as one team" during the pandemic.

Adopting amendments to the Russian constitution is a step towards the democratization of the society as they envisage transferring some presidential powers to the parliament, Putin said.

The Russian president added that he did not agree with the Communist party which criticized amendments and claimed that the new constitution would pave a way towards dictatorship and oligarchy.