US Will Run Budget Deficit of Over $4 Trn This Year, At Levels Not Seen Since WWII, Analyst Says

The US Treasury published data on Wednesday, showing that the country's national debt total has exceeded $26 trillion for the first time in US history. The federal government budget deficit for the first eight months of the current fiscal year has reached $1.88 trillion - already higher than any full fiscal year deficit in the US ever.

Tom Luongo, a geopolitical analyst and publisher of the Gold Goats 'n Guns newsletter, reflects on the present-day economic situation in the US and gives his forecast for the global economy in relation to the demand for dollars.

Sputnik: The United States' national debt has exceeded $26 trillion for the first time in American history, Treasury data revealed. What does this number tell us about the current state of the US economy? What will be the ramifications of this, if any?

Tom Luongo: The U.S. economy is in terrible shape thanks to unfolding global financial crisis as well as the catalyst of the COVID-19 response. Locking down the economy only intensified a crisis that was already unfolding, making it far worse than it should have been. The U.S. will run a primary budget deficit of more than $4 trillion this year, above 25% of GDP, at levels not seen since WWII.

And in some ways that has to occur given the circumstances because the world is biblically short of dollars as the Fed's weekly balance sheet statement tells us. The demand for dollars is still very high and as the quality of the debt repayable in dollars deteriorates around the world, that demand will only intensify from here. So, this was always going to occur, the question was always to what extent and spread out over what time period. COVID-19 accelerated both the severity and the timeline of events.

Sputnik: According to the Peter G. Peterson Foundation, the United States spends $1 billion every day on the interest alone. At the moment, the US federal debt amounts to $179,000 per household or $70,000 per person. How can this spending be restructured in order to sustain the economy?

Tom Luongo: As a libertarian and a student of the Austrian School, I've complained about U.S. spending for years to no avail.  President Trump has taken steps to improve the internal flow of dollars through the U.S. economy via lower taxes on the middle class and small businesses - anathema to the power brokers in DC by the way - as well as deregulation and cost-cutting within unnecessarily large bureaucracies. But at the same time, he's ramped up spending to enormous levels which are unsustainable.  And it is this extreme level of debt that the U.S. cannot 'grow out of.' Growth isn't in the cards now, managing the debt will be.

Right now, the debt is being issued at historically low rates and old debt rolled over at even lower rates.... so, for now, the interest on the debt isn't an issue. But, any hint of rising rates will blow out the budget hole as interest payments begin to eat away at available funds. With spending at war-time levels, the big question is confidence in the dollar in the long run.

So, there are crosscurrents in play. The world needs dollars because of all the debt but the dollar's fundamentals are degrading.  When the balance shifts from the latter to the former, then and only then will the dollar 'fall out of bed' as so many are predicting. That's not 2020, however. Everyone else has to collapse first. And they haven't. The Fed has printed just enough dollars to keep the domestic economy from collapsing completely while still starving the world of dollars. That's the next wave we should be preparing for. 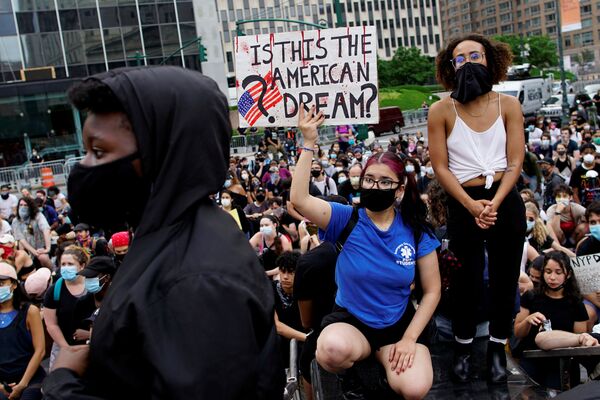 Demonstrator raises his fist during a protest against police brutality and racial inequality in the aftermath of the death in Minneapolis police custody of George Floyd, in New York, U.S., June 11, 2020
© REUTERS / Eduardo Munoz

Sputnik: We’re currently seeing massive protests accompanied by riots and looting in the US due to the death of George Floyd, which is also damaging the economy. In your view, which is dealing a harder blow to the US economy, looting or the consequences of the coronavirus lockdown?

Tom Luongo: The coronavirus lockdown was much worse because it piggy-backed on top of the financial system breakdown already incipient, thanks to the collapse of oil prices, which was the real catalyst for the collapse in March. COVID-19 just made it as bad as it could possibly have been.

The riots today are an ongoing problem which are just as politically motivated along partisan lines as the lockdown orders were in March.  Trump still has both the bully pulpit, the support of the military and control of the printing press to keep the domestic flow of dollars sustainable through the election.

The American system is broken, no doubt. But so are Europe, China and Japan and until one of them emerges as the centre of the new world, the breakdown of the US is the focus. And capital is still better served in the US than it is in those places.  Capital flows to where it is treated best. And until the US collapses completely, it will still be the destination of safe harbour behaviour.

The expression of frustration and anger on the streets today is a reflection of how broken things are. So, change is coming, possibly faster than people expect. But no one should be wishing for a chaotic breakdown of it like what occurred with the USSR in 1989. Unfortunately, I don't see a future where that doesn't occur now.