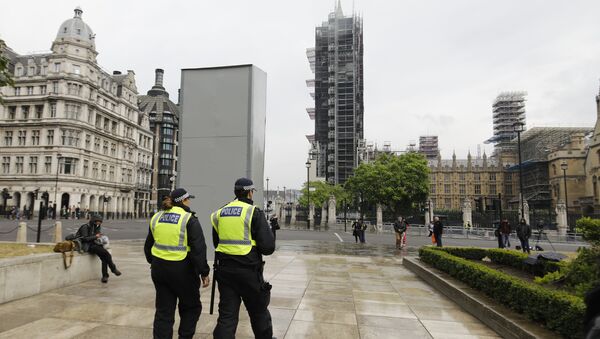 © AFP 2021 / TOLGA AKMEN
Subscribe
London's mayor Sadiq Khan was accused of “surrendering” the capital's streets “to the mob” for his decision on Thursday to board up the monument to Winston Churchill at Parliament Square and the nearby Cenotaph statue ahead of anti-racism protests slated for Saturday.

UK Home Secretary Priti Patel has slammed London Mayor Sadiq Khan for the decision to cover up the monument to Winston Churchill in Parliament Square, urging that the statue be “liberated” from its protective scaffolding, the Daily Mail reports.

Patel also accused Sadiq Khan of showing a weak response to the violence that spilled into the streets of the UK capital, saying:

“Had he called out the minority in particular who were subversive in a peaceful protest, and had he pulled up the thuggery in the right way, we would not be seeing the boarding up of our national hero.”

Earlier, the London mayor ordered that a protective box be placed over the bronze statue to Winston Churchill, erected in 1973 to honour the UK former premier who led Britain during the Second World War, after it was vandalised during anti-racism protests last weekend.

The monument had been spray-painted with the words ‘was a racist’ last weekend, with the Cenotaph, now similarly protected with boarding, also targeted. 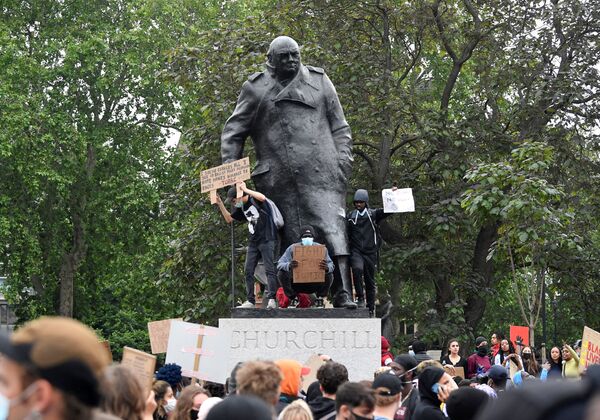 There have been concerns that future Black Lives Matter protests could result in the statue being targeted again.

Furthermore, according to police, a network of “football hooligans and extremists” had vowed to “defend” national monuments, with campaign group Black Lives Matter urging supporters not to travel to the capital lest they be attacked.

‘Responsible Thing to Do’

In response to the broadside from Priti Patel, the Mayor accused her of “political point scoring”, with his spokesman cited as saying:

“The Home Secretary should have a word with her boss the Prime Minister, who did exactly the same when he was mayor of London – including boarding up the whole of Parliament Square to protect the statues from protesters… Sadiq has urged everyone thinking of protesting to stay at home instead this weekend and he has protected these monuments from damage or vandalism – which is the only responsible thing to do.” 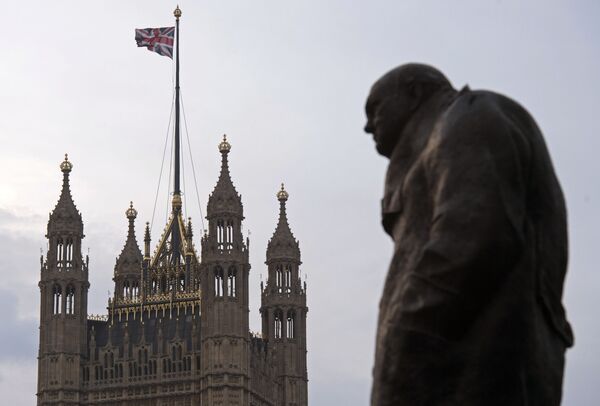 A statue of former British Prime Minister Winston Churchill stands near the Victoria Tower of the Houses of Parliament, as a British Union flag flies from a pole atop the tower, in London on December 8, 2016.
© AFP 2021 / JUSTIN TALLIS

UK Prime Minister Boris Johnson on 12 June condemned the vandalism of Winston Churchill’s statue as “absurd and shameful”, tweeting that the statue of Winston Churchill was a reminder of his actions to save the country, the whole of Europe, “from a fascist and racist tyranny”.

​As Johnson urged people to stay away from reportedly planned protests at the weekend, he added they had been “sadly hijacked by extremists intent on violence”.

"The attacks on the police and indiscriminate acts of violence which we have witnessed over the last week are intolerable and they are abhorrent."

Dozens of protests, driven by events in the US triggered by the 25 May death of African American man George Floyd, are set to take place across the UK on Saturday. The demonstrations are a show of solidarity with anti-police brutality protests in the US and to protest police violence and racism in the United Kingdom.

The recent actions have led to the removal of historical statues across the US, with many monuments and statues, most of which depict Confederate leaders or Christopher Columbus, either vandalised by protesters or ordered dismantled by state and city officials.