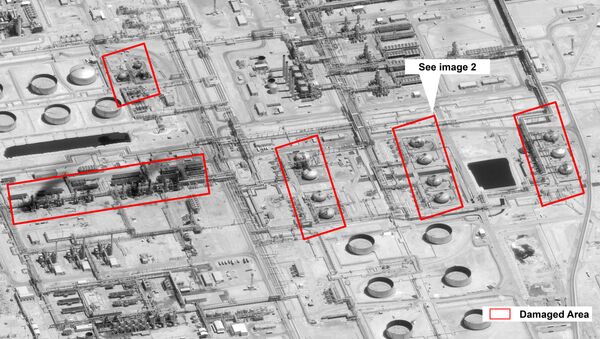 Ilya Tsukanov
All materialsWrite to the author
On September 14, 2019, a massed missile and drone strike on two Saudi oil refineries temporarily halved the kingdom’s oil output. Yemen’s Houthi militia claimed responsibility for these and other attacks, but Washington, Riyadh, and America’s European allies blamed Iran. Tehran dismissed the allegations as “blind, incomprehensible and meaningless.”

Iran’s foreign ministry has dismissed a fresh United Nations report accusing Tehran of providing missiles and drones to Yemen’s Houthi militia for their fight against the Saudi-led coalition.

“Interestingly, the Secretariat’s report coincides with the US’ move to propose a dangerous draft resolution that paves the way for the extension of arms restrictions on Iran in an illegal way; yet more surprisingly, the content of this report is used by the US two weeks prior to its official release,” the ministry added, suggesting that the document may have been prepared under US guidance for use against Iran.

“Undoubtedly, such reports will not only fail to help [promote] peace and security in the region and to implement Security Council resolutions, but also completely destroy the validity and reputation of the United Nations,” Tehran warned. Ultimately, the foreign ministry warned the UN against playing into the US’s “pre-planned scenario to annul the cancellation of the Iran arms embargo.”

On Friday, Bloomberg reported that a report from UN Secretary-General Antonio Guterres sent to the Security Council a day earlier had concluded that the weapons used in a series of attacks into Saudi Arabia from Yemeni territory were probably of “Iranian origin” and “may have been transferred” to Yemen “in a matter inconsistent” with the UN resolution on the Iran nuclear deal.

The report was said to have been based on the analysis of missile and drone remnants from the May 2019 attack on the oil refinery in Afif, Saudi Arabia, strikes on the Abha Airport in June and August and the attacks on the Abqaiq and Khurays refineries in September which temporarily cut Saudi oil production in half. One of the components identified in the report was a drone engine said to have shown ‘similarities’ to Iran’s Shahed 783 engine design. Bloomberg, which had a chance to look at the report, did not clarify which nations’ experts were involved in the analysis of the missile and drone parts.

World
Russia’s UN Envoy Says US ‘Knocking on Closed Door’ in ‘Ridiculous’ Bid to Extend Iran Arms Embargo
The Security Council is expected to meet to discuss the report’s findings later this month, with the document’s release coming just months ahead of the October deadline to extend the international arms embargo against Tehran. Russia and China have each indicated that they would not allow for the embargo to be extended, pointing to Iran’s observance its commitment not to pursue nuclear weapons.

Saudi Arabia and a coalition of mostly Gulf states have been attempting to restore ousted Yemeni president Abdrabbuh Mansur Hadi to power since March 2015, but has so far proven unable to dislodge the Houthi militia which took over much of the country in late 2014. What’s more, Saudi air defences have had to deal with Houthi missile and drone strikes on cities, military bases, airports and other infrastructure in Saudi Arabia itself. Houthi officials maintain that its missiles and drones were developed “with purely Yemeni expertise,” with some reports suggesting some of the missiles were reverse-engineered from old Soviet designs inherited from the People’s Democratic Republic of Yemen, or South Yemen, during the Cold War.