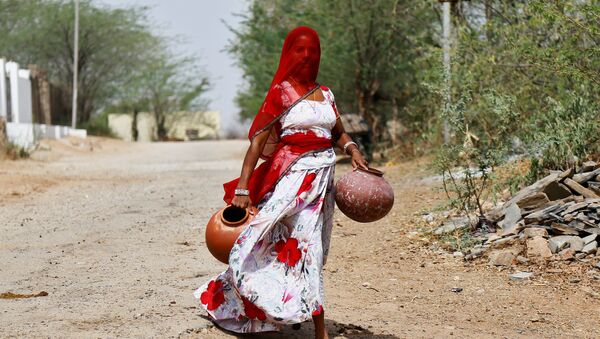 © REUTERS / Himanshu Sharma
Subscribe
New Delhi (Sputnik): Troubles haven't ended for the state of Rajasthan in western India, which has been struck by a heat wave amid the ongoing pandemic. After witnessing a major locust attack and a rising number of COVID-19 cases, the state is now experiencing drinking water shortages due to the exceptionally hot weather.

Rajasthan, a state which is 61% covered by desert and home to the Thar Desert, is witnessing a massive drought as hundreds of fish and a camel have reportedly died due to water scarcity. Amid rising temperature and no rainfall, hundreds of fish were found dead in a drying pond in Soyla, a village near the city of Jodhpur on Saturday. Officials have said that since there is no rainfall, water levels have fallen.

#BIGNEWS: Hundreds of fishes die at a village in Jodhpur, #Rajasthan as water level of the pond went down due to no rainfall. pic.twitter.com/kv1JCmhwvm

​The villagers contributed money to arrange for a water tanker to be sent to the pond so that the remaining fish don't die.

As the mercury soars, keeping stray cattle alive has become extremely difficult. A few days ago, picture of a dead camel with its head in an empty water tank in Rajasthan’s Barmer district went viral on social media.

A camel in Rajasthan’s Barmer district died while searching for water. As soon as news spread over the social media, people started condemning the state government’s management of drinking water for the people as well as for the cattle. Leader of opponent political parties too targeted the govt over severe crisis of drinking water in the region. Dr Bhanwar Ram Beniwal, in-charge at Animal Husbandry department, told HT that he got the news through social media only. Dr Beniwal said that it is fact that area is facing severe crisis of drinking water. He, however, maintained that arrangement of drinking water is responsibility of water works department. Meanwhile, soon after the reports of death of camel due to thirst, district administration sanction 26 tube wells for the Baytoo area. . . #rajasthan #camel #hindustantimes #animals #animalkingdom #barmer

The camel had died while searching for water, the local media reports said. The viral picture resulted in a massive backlash on social media, resulting in government action.

The Animal Husbandry department said the area is facing a severe drinking water shortage and that providing drinking water is the responsibility of the water works department. Some reports suggest that area is getting water supplied to it only 3-4 times per month. Meanwhile, the residents have been asked to wash their hands every several hours to contain the spread of COVID-19.

Last month the locust invasion also hit the state, destroying 60% of its crops and as much as 100% in some regions.