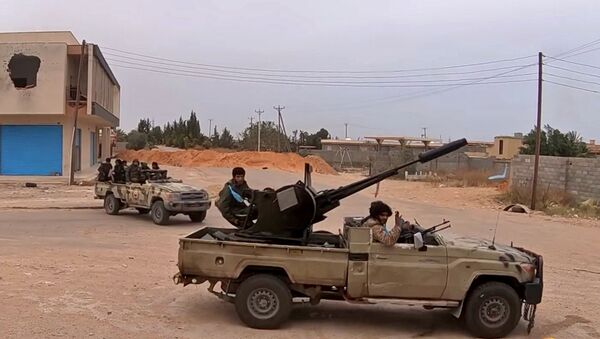 CAIRO (Sputnik) - The Libyan National Army led by Field Marshal Khalifa Haftar has decided to reorganize its command structure amid the retreat of its forces from a number of positions in the course of the confrontation with the UN-backed Government of National Accord, the Army's spokesman Major General Ahmad al-Mismari said on Saturday.

"The general command announces the reorganization of the main operational headquarters of the Libyan Army and the appointment of officers who can effectively conduct the battle, as well as respond to changes in combat conditions", the spokesman said in a statement.

In recent weeks, the forces of the Government of National Accord have made significant gains during a counteroffensive on the outskirts of Tripoli, reclaiming territory from the Libyan National Army.

On 6 June Egyptian President Abdel Fattah Sisi unveiled the Cairo initiative, envisaging a ceasefire in Libya beginning at 6:00 a.m. (04:00 GMT) on 8 June and conditions for a political settlement. The UN-backed Libyan government rejected the deal. Following this announcement, armed forces loyal to the Field Marshal have launched a counteroffensive against the forces of the Government of National Accord near Misrata.

The largest factions – the Government of National Accord in Tripoli and the Tobruk-based House of Representatives supported by Khalifa Haftar, emerged as the country’s largest competing power blocs, and have engaged in a series of armed clashes after defeating smaller rivals.