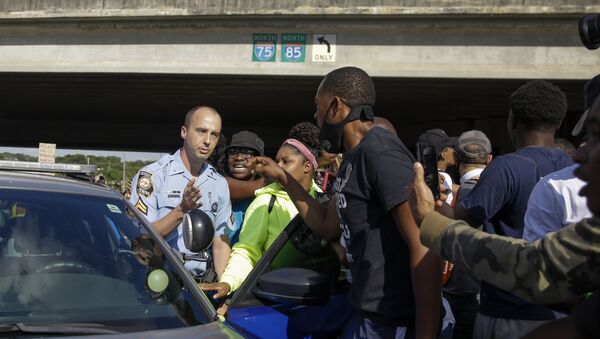 © AP Photo / Brynn Anderson
Subscribe
The man, later identified as Rayshard Brooks, was pointing a Taser at a policeman before the officer fatally shot him, according to the police.

Shields, who has served in police for more than 20 years, would continue in another role with the city, while her position as police chief will be temporarily given to Assistant Police Chief Rodney Bryant until a permanent replacement is found.

"[...] because of her desire that Atlanta should be a meaningful model of what reform should look like across this country, Chief Shields has offered to immediately step aside as police chief so that the city may move forward with urgency in rebuilding the trust so desperately needed throughout our communities", Bottoms said.

She also called for the immediate termination of the two officers involved, as she did not believe that this was a "justified use of deadly force".

Earlier in the day, the Georgia Bureau of Investigation released surveillance footage from outside Wendy's restaurant, where Brooks was shot. The video captured Brooks running away with what appears to be the officer's Taser, before he turns around and points it at the officer.

According to the GBA's press release, police responded to a report at around 10.33 pm about a man sleeping in his vehicle in the restaurant's drive-through causing difficulty for other drivers. He failed the sobriety tests and initiated an altercation.

Footage shared online shows Brooks grabbing what law enforcement believe was an officer's Taser and trying to flee. As one of the officers runs to chase him, the camera looses them from sight, but records the sound of three gunshots.

"During a physical struggle with officers, Brooks obtained one of the officer's Tasers and began to flee from the scene.  Officers pursued Brooks on foot and during the chase, Brooks turned and pointed the Taser at the officer. The officer fired his weapon, striking Brooks," the press release read.

Photo and video footage posted on social media shows protesters gathered at the site where Brooks was shot on Saturday, demanding that Atlanta Police Chief Erika Shields resign — which she did shortly after. According to local media, there is a whole list of more protests scheduled to take place across the city, including at Police Headquarters.

000000
Popular comments
A harmless drunk driver , who fell asleep at the wheel, whilst peacefully waiting for a meal at Wendy's. Was shot to death by the kill crazy corrupt STASI 2.0 "To serve to Kill" Yankee cops. Who is the next victim. Will the kill crazy corrupt racists cops of Atlanta start gunning down all innocent victims seeking a meal at McDonalds ? Or an equally innocent grandmother sitting a beauty parlor? Killed by a stray police bullet. Such an incident happened in Texas, by the way....lol