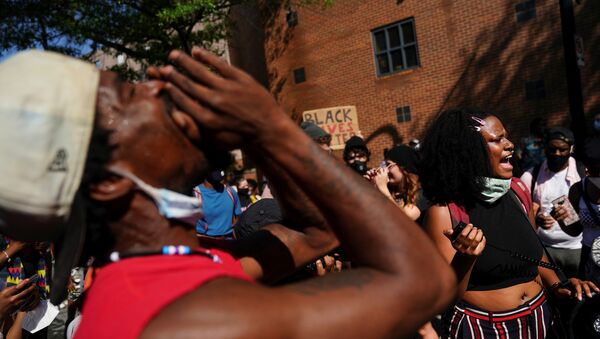 Subscribe
Demonstrations in support of the black community and protests opposing police violence against African American people have been underway in various US cities since late May in response to the killing of an African American man, George Floyd, in police custody.

The governor of Kentucky, a Democrat rival of President Donald Trump, said that he has clinched support from lawmakers in the president's party to remove a statue dedicated to Confederate soldiers from the state which many consider synonymous with the state's history of black slavery.

While Kentucky was a border state during the 1861-1865 American Civil War, both the Union and Confederate armies recruited troops there and the Confederacy managed to control the Jackson Purchase, a region in the southwest of the state which was known for its tobacco plantations.

A video of George Floyd's arrest showed a white police officer, George Chauvin, shoving his knee into Floyd's neck for almost nine minutes after he had been restrained, despite Floyd saying that he could not breathe; Floyd later died in hospital. The clip sparked protests which soon turned into riots, as cities across the US descended into chaos characterised by looting, arson attacks and the destruction of property.

Law enforcement in the Atlanta city of the southeastern US state of Georgia have used tear gas to disperse protesters who took to the streets after an African American man, Rayshard Brooks, was shot dead by a police officer during arrest, right in the midst of weeks of nationwide riots against police brutality and racial discrimination, US media reported on Sunday.

Two women, aged 27 and 28, were arrested after a statue of famous British explorer, Captain James Cook, in Sydney's Hyde Park was defaced, the New South Wales Police Force said in a statement on Sunday.

"Two women have been charged after a statue was allegedly defaced in Sydney’s CBD [central business district] early this morning. Police were alerted to graffiti on the statue in Hyde Park just after 4am (Sunday 14 June 2020)," NSW police said.

The women were found with a bag containing spray cans. They were both charged with destruction and damage of property and possession of graffiti with intent to contravene.

Demonstrators in New Orleans have taken down a bust of John McDonogh, a slave-owner and philanthropist who sought to educate black children, and threw it into the Mississippi River, local media report.

The bust was reportedly taken down on Saturday after a Take Back Pride motorcade rally: the statue was damaged, loaded onto two trucks, transported to an area brewery, where it was thrown into the Mississippi River.

The City of New Orleans rejects vandalism and destruction of City property. It is unlawful. pic.twitter.com/CcAKfNFK5X

Protestors, in a demonstration following the Pride Motorcade, took down the John McDonough bust in Duncan Plaza using a rope, skateboard and chisel? #nolaprotest pic.twitter.com/HRRjYFeO5Z

About a thousand protesters took down the statue of slave owner John McDonough from Duncan Plaza, marched it to the river and dumped it in the Mississippi this afternoon. Photo provided by a friend in the protest. pic.twitter.com/Q66ETM6opw

More than 100 people were arrested in the UK capital of London on Saturday over offenses including violent disorder, assault on law enforcement and possession of weapons, Scotland Yard said in a statement.

As of 21:00hrs more than 100 people have been arrested during today's protest for offences including breach of the peace, violent disorder, assault on officers, possession of an offensive weapon, possession of class A drugs, and drunk and disorder.

Protests in the United States against police brutality appear to have got a new impetus as another African American man, Rayshard Brooks, was killed by law enforcement officers during arrest in the Atlanta city of the southeastern Georgia state.

According to a press release by the Georgia Bureau of Investigation, the incident took place on Friday evening when police responded to a complaint about a man sleeping in a vehicle parked in the drive thru of a local Wendy's restaurant and obstructing other customers. Officers found 27-year-old Brooks indeed asleep and intoxicated.

"During a physical struggle with officers, Brooks obtained one of the officer's Tasers and began to flee from the scene.  Officers pursued Brooks on foot and during the chase, Brooks turned and pointed the Taser at the officer. The officer fired his weapon, striking Brooks," the press release read.

MOSCOW (Sputnik) - The French police have detained 26 people who participated in an uncoordinated protest against racism and police brutality in Paris on Saturday, the Police Prefecture said.

The rally started earlier in the day on the Place de la Republique with protesters being expected to march toward the Palais Garnier but policemen cordoned off the area. According to French BFMTV broadcaster, some 15,000 people took part in the rally.

"As of 19:00 p.m. [17:00 GMT], law enforcement forces have made 26 detentions," the Paris Police Prefecture wrote on Twitter without specifying reasons for the detentions.

A wave of protests against racial inequality has swept through the United States and a number of other countries, including France, in the wake of African American man George Floyd’s death in police custody the US city of Minneapolis on May 25. French cities such as Marseille and Lyon, which also have large populations of African descent, are expecting similar marches over the weekend. 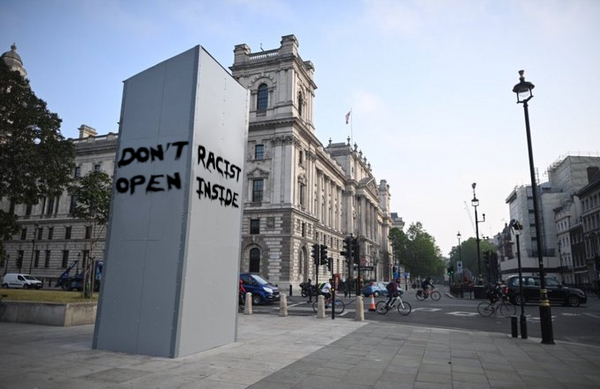 'You’re Free to Demonstrate, but you Can't Touch Our Statues', Says Right-Wing Rotterdam Politician
14:11 GMT 13.06.2020
Who Took Part in London Clashes on Saturday?

Paris authorities have ordered stores and restaurants along the march’s route to close fearing eruptions of violence.

The gathering flaunts a communique released by the government reminding of the restriction of gatherings of more than 10 people.

The movement against racism that has swept the world following the killing of George Floyd at the hands of Minneapolis police has evoked memories of Adama Traore in France. The Frenchman of African origin died in police custody in 2016 and his cause of death is yet to be determined.

French cities such as Marseille and Lyon, which also have large populations of African descent, are expecting similar marches over the weekend.

On Monday, police began moving certain things out of the East Precinct in moving vans and for the most part completely reduced the police presence in the Capitol Hill area altogether, Shauna Sowersby, Seattle-based Freelance reporter and photographer said.

“I have still seen a couple of police moving inside the building, but for the most part it is not operating at the moment. They didn’t move everything out either, there are clearly still office spaces that weren’t moved out,” Shauna Sowersby said.

“Police have stated they don’t intend to let the building be taken over, but have not stated when they expect to be back in the building. So in actuality CHAZ isn’t a true autonomous zone,” she added.

Iowa Governor Kim Reynolds signed legislation that promotes greater accountability for police officers and bans chokeholds after thousands of demonstrators demanded changes in the policing systems during the George Floyd Protests across the state.

The bill was passed by the Iowa House and Senate, and was supported by the lawmakers from both parties. The legislation bans chokeholds, allows the state attorney general to investigate deaths caused by police officers and prohibits law enforcement officers who have been fired for serious misconduct, namely repetitive use of excessive force, from being re-hired.

The governor pledged to do more to confront police brutality and said that "it is just the beginning" during a press conference.