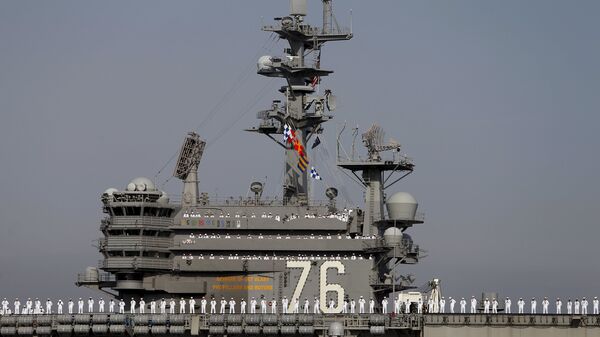 Ilya Tsukanov
All materialsWrite to the author
Already strained relations between Beijing and Washington over the coronavirus pandemic, Hong Kong and military deployments in the South China Sea were exacerbated this week after Taipei allowed a US military cargo plane to fly across the length of the island of Taiwan, a move which China characterised as “illegal” and “seriously provocative”.

More than a quarter of America’s active aircraft carrier groups are now operating in the Indo-Pacific region, with the carriers and their complement of attack aircraft and helicopters flanked by cruisers, destroyers, and other support vessels.

Sputnik reported the departure of the USS Nimitz from San Diego, California and the USS Ronald Reagan from Yokosuka, Japan for Pacific deployments on Wednesday. Both of the Nimitz-class nuclear-powered carriers, displacing over 100,000 tonnes apiece, carry dozens of fighter aircraft, reconnaissance planes and helicopters, along with advanced electronic warfare, anti-ship, anti-aircraft and close-in weapons.

The strike groups are deployed alongside the USSR Theodore Roosevelt, which left Guam last week after a months’ long coronavirus-related lockdown.

The simultaneous deployment of three of America’s 11 active aircraft carriers is the first show of force of its kind in close to three years, and, according to AP, is unusual, given that normally, concentrated carrier deployments are limited, owing to the costs involved, repair schedules, port visits, training and deployments across the globe.

“The ability to be present in a strong way is part of the competition. And as I always tell my guys here, you’ve got to be present to win when you’re competing,” Rear Adm. Stephen Koehler, US Navy Indo-Pacific Command director of operations, said. “Carriers and carrier strike groups writ large are phenomenal symbols of American naval power. I really am pretty fired up that we’ve got three of them at the moment,” he stressed.

Koehler admitted that while the Indo-Pacific deployment isn’t something the US will be able to sustain permanently, “it’s something we can do when we want to.”

The carrier group deployments come following the latest escalation of tensions between the US and China, which took place Monday after Taiwan’s defence ministry allowed a US Navy C-40A Clipper cargo plane to fly the span of the island on its way from Okinawa to Thailand. China blasted the incident as “provocative”.

The US-China tensions over Taiwan are just the latest in a series of back-and-forth escalations in recent months related to coronavirus, trade, technology competition, arms control, Hong Kong and other issues.

Late last year, US officials sounded the alarm over the growing capabilities of the People’s Liberation Army Navy (PLAN) after the size of the Chinese navy outstripped that of the US 300-290 ships. The Pentagon responded to the shifting balance of forces in the Pacific region by ordering new classes of anti-ship missiles, introducing the concept of mini-carriers, and proposing the downsizing of strike groups. In addition, after scrapping the Intermediate-Range Nuclear Forces Treaty with Russia last year, Washington has proposed the deployment of new medium-range missiles in the Pacific. However, major US allies including South Korea and the Philippines have vowed not to allow such missiles to be deployed on their territory.