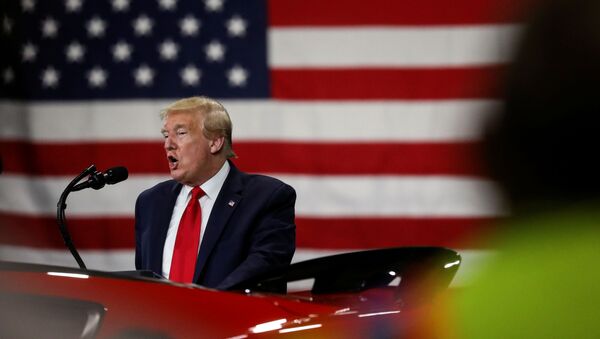 As citizens across the United States have been protesting in the wake of the death in police custody of Minneapolis resident George Floyd, law enforcement abandoned the Seattle Police Department's East Precinct on Monday night in what was described as an act of "trust and de-escalation" by local authorities.

US President Donald Trump underscored in an exclusive Fox News interview on 11 June to be aired at 1 p.m. ET Friday, that his administration would not allow Seattle to “be occupied by anarchists."

On 8 June the Seattle Police Department had boarded up the windows of its East Precinct and conceded several blocks of the city to the people protesting the death of George Floyd.

"If there were more toughness, you wouldn't have the kind of devastation that you had in Minneapolis and in Seattle. I mean, let's see what's going on in Seattle… I will tell you, if they don't straighten that situation out, we're going to straighten it out," said Trump, according to a preview of the interview reported by Fox News.

Trump launched a broadside at Seattle Mayor Jenny Durkan for her "pathetic" handling of the situation, querying if she had “ever done this before?", and insisted that Washington Governor Jay Inslee heed his advice and send in National Guard troops to restore order, reports the outlet.

"He's got great National Guard troops so he can do it… But one way or the other, it's going to get done. These people are not going to occupy a major portion of a great city.”

Trump was asked in the interview by Harris Faulkner to elaborate on his words when he referred to himself on 1 June as a “law and order president".

"Well, we are going to do lots of things, good things, but we also have to keep our police and our law enforcement strong… But when you see an event like that, with the more than eight minutes of horror - that's eight minutes truly of horror, a disgrace," said Donald Trump referring to footage showing then-Minneapolis police officer Derek Chauvin pressing his knee into George Floyd's neck on 25 May.

"Then people start saying, “Well, are all police like that?” …Police aren't like that. I mean, I've seen so many incredible things that they do. But you don't see that ... You don't put it on television,” said Trump.

As the President’s one-on-one was discussed later, on “Special Report," the anchor Bret Baier asked Harris Faulkner whether Donald Trump was fully aware of the "frustration, the anger, the fear" in the African-American community of the country.

"He watched the eight minutes and 46 seconds, he said, of George Floyds death… He taps into the loss and the hurt and the pain, and he understands that," responded Faulkner.

The Fox News host added that he believed that according to Trump, “fixing the economy is how you bring everybody together and bring them forth”.

“He wants to restore the markings of black wealth and that rise that was happening in black communities economically. And that's how he wants to go for it," said Faulkner.

According to the preview, in the interview the host asked Trump about his controversial "when the looting starts, the shooting starts" tweet during the May riots sparked by Floyd's death.

As the host explained that the original phrase was used in 1967, by then-Miami police chief Walter Headley, who was “cracking down” on the unrest of the time, Faulkner asked what Trump had meant by his statement.

As protests and riots have continued to rattle the US after African American George Floyd died in Minneapolis police custody following a violent arrest, on Monday Seattle police abandoned the boarded-up East Precinct building.

A crowd of anti-police protesters erected barricades in the vicinity, declaring six blocks in the city's Capitol Hill neighbourhood an “autonomous” and “cop-free zone”. 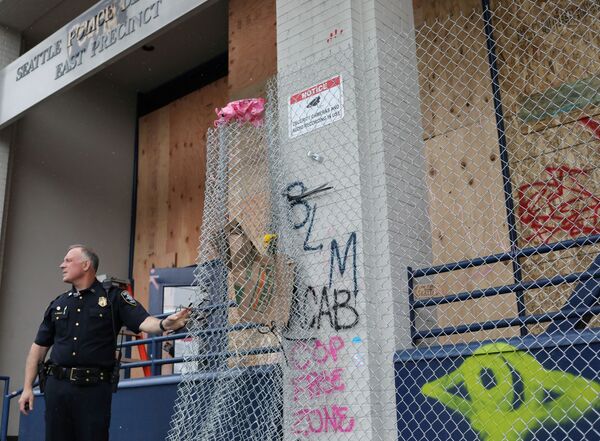 On Thursday Donald Trump reiterated his vow to "take back" Seattle from protesters who had taken over the city.

In a tweet Trump urged Governor Jay Inslee and the Mayor of Seattle, Jenny Durkan, to stop the “ugly anarchists”.

​In a tweeted response, Seattle Mayor Jenny Durkan suggested that Trump "go back” to his “bunker". 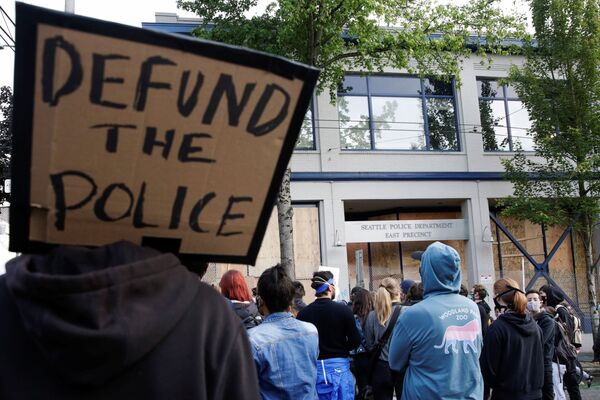 A protester holds a sing that reads "defund the police" after Seattle Police vacated the department's East Precinct and people continue to rally against racial inequality and the death in Minneapolis police custody of George Floyd, in Seattle, Washington, U.S. June 8, 2020.
© REUTERS / Jason Redmond

Mass rallies and violence have been sweeping across the United States since the death of Minneapolis black resident George Floyd.

Nonetheless, the protests show no sign of abating, with protesters bringing down a statue of Christopher Columbus in Minnesota, claiming he was responsible for Native American genocide, and it was time for the statue to go.

Another statue of Columbus was beheaded in Boston, and yet another one vandalised in Richmond, with many other monuments also damaged or dismantled across the country as part of actions against historic monuments connected to racism and slavery.