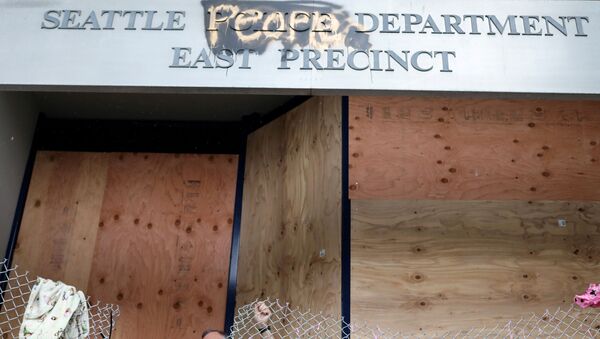 Earlier, US President Donald Trump said that the White House was finalising an executive order that will encourage law enforcement departments across the United States to meet the most current professional standards with respect to the use of force.

Black Lives Matter protesters have occupied several blocks of central Seattle's artsy Capitol Hill neighbourhood and were camping outside the City Hall building. Law enforcement officers have been ordered not to use tear gas and other violent tactics to disperse the crowds.

After the Seattle Police Department abandoned the East Precinct building on Monday, protesters took control of the surrounding six-block area and reworked with spray paint the sign above the station’s door to read “Seattle People’s Department East Precinct”.

On 25 May, George Floyd, a 46-year African-American man, was pronounced dead at a Minneapolis, Minnesota hospital shortly after a white police officer knelt on his neck for eight minutes and 46 seconds. A viral video of the incident sparked worldwide protests.

President Donald Trump slammed Seattle Mayor Jenny Durkan, who described the city takeover as a "summer of love", calling on her to take action.

The governor of Kentucky, a Democrat rival of President Donald Trump, said he has clinched support from lawmakers in the president's party to remove a statue representing the state’s Confederate history that is synonymous with black slavery.

“Today has been a historic day in the Commonwealth. Pursuant to my request, the Historic Properties Advisory Commission met and, in a bipartisan vote, voted to remove the Jefferson Davis statue from our Rotundal,” Governor Andy Beshear said in a message and video posted via Twitter on Friday. The Historic Properties Advisory Commission voted 11-1 in favor of removing the statue 11-1, Beshear said.

The UK Black Lives Matter movement has received over 865,000 pounds ($1.1 million) in donations to fund the activities of the organization as widespread protests against racial inequality continue after the death of George Floyd in the United States, according to a fundraiser hosted on the GoFundMe platform.

A total of 865,266 pounds has been pledged by 30,900 donors as of Friday evening, according to the fundraiser's public donation records. The UK branch of the Black Lives Movement had initially intended to raise 500,000 pounds.

LONDON (Sputnik) - Mayor of London Sadiq Khan's decision to board up statues in the UK capital, including one commemorating former wartime Prime Minister Winston Churchill, is a sign of surrender to Black Lives Matter (BLM) protesters, Freddy Vachha, the general secretary of the UK Independence Party (UKIP), said on Friday.

A wave of protests against racial inequality has swept through the UK in the wake of George Floyd’s death in the US city of Minneapolis on May 25. Over the past week, demonstrators have turned their attention to statues commemorating public figures linked with racism or the slave trade. During the protests, the Cenotaph war memorial and a statue of former Prime Minister Winston Churchill in Parliament Square was defaced. Fears of further violence have prompted Khan to construct protective barriers around both landmarks in a bid to prevent further damage, although concerns remain as to whether the police will be able to prevent further disorder.

"This is a declaration of surrender by the person who likes to call himself a mayor. This is an outrage, he's a disgrace, he's the worst mayor London has ever had, he is the worst without any question ... He doesn't understand that we have to stand up to this. He just doesn't get it and unfortunately, London is now a hotbed of sedition," the UKIP official said.

BLM made headlines last week following widespread clashes with UK police. More than 130 people have been arrested since the beginning of the BLM protests in the UK, and 62 law enforcement officers have been injured.

Leading UK officials have failed to show the required leadership during the ongoing protests, Vachha stated.

"We're at a huge crossroads, a moral crossroads in this country and we're just not seeing the leadership. They are just reacting to events," the UKIP official remarked.

Vachha also took aim at those seeking to cause further harm to UK monuments, claiming there was a concentrated effort underway to attack the nation's past. BLM activists have repeatedly attempted to remove or attack statues in the UK that they associate with either slavery or racism, having been successful in their efforts last weekend to tear down a statue of 18th-century slave trader Edward Colston in Bristol.

Earlier on Friday, Prime Minister Boris Johnson said that the country cannot edit or censor its past. These comments were echoed by the UKIP official, who argued that the country's history needed to be remembered and appreciated fully rather than obliterated or otherwise ignored.

"There's this attitude that anything that had anything to do with slavery has to be removed from public sight, boarded up even, just like that. But this is history and those who forget history are condemned to repeat it," Vachha remarked.

Several groups of citizens have taken to the streets of UK cities to protect statues from being vandalized by BLM protesters. A statue of anti-apartheid leader Nelson Mandela in London has also been boarded up amid fears that it would be defaced by what Khan called "extreme far-right groups."

Vachha took issue with the notion that all counter-protesters to the BLM movement must somehow be on the "far-right," claiming instead a great many of them were likely to be regular citizens looking to protect UK monuments.

"Far-right is being used to describe anyone who is not on the far-left. So, I would dismiss the ravings of this man [Mayor Khan]. The vast majority of people who try to come out and protect those statues will not be far-right. They will simply be outraged that they are trying to remove an integral part of our history. We're not celebrating slavery or other wrongs, but those who fail to learn from history will repeat it. We're not justifying it but we are explaining it," the UKIP official stated.

There was also an element of hypocrisy in play when it came to how the country’s COVID-19 lockdown measures were being enforced, Vachha stated, especially in light of the decision to allow previous mass demonstrations of BLM activists to go ahead.

"Police are threatening people with arrest for trying to attend a funeral of a loved one but now we've seen huge numbers … breaking social distancing to conglomerate in London," the UKIP official stated.

The London branch of the BLM movement announced on Thursday that a planned Saturday protest was cancelled as the safety of demonstrators could not be guaranteed. The group cited rumours that individuals connected to the far-right English Defence League were planning on travelling to the demonstrations to protest against the defacing of statues.

WASHINGTON, June 12 (Sputnik) - The US government should implement immediate reforms to eliminate structural discrimination by police, the United Nations Committee on the Elimination of Racial Discrimination said in a statement on Friday.

"[The committee] urges the Government of the United States of America, State and local authorities to take immediate and appropriate reforms aimed at eliminating racially disparate impacts or structural discrimination in the police and the criminal justice system, taking into account the rights of victims of racially motivated crime," the statement said.

On Thursday, President Donald Trump said he is finalizing an executive order to encourage law enforcement departments to implement "current standards" amid nationwide protests sparked by the May 25 police killing of African American George Floyd.

MOSCOW, June 12 (Sputnik) - Officials in the US town of Camden have taken down a statue of Christopher Columbus stating numerous requests from the local residents, who are predominantly minority people of color, media reported.

The move is the latest in a series of deconstructions of statues and public monuments with troubled racial histories, part of the worldwide movements sparked by the killing of George Floyd.

“The Christopher Columbus Statue located at Camden’s Farnham Park, has long been a controversial symbol. Its presence has long pained the residents of the community. Previously, there have been requests to remove the statue as the community no longer supports the monument. It is long overdue, but we must now establish a plan to reexamine these outdated symbols of racial division and injustices,” Camden Mayor Frank Moran said in a statement.

According to CBS, protesters had initially blocked the truck from approaching the statue, saying that they had planned to protest around it this weekend. News footage showed the statue in pieces on the ground.

The wave of defacing statues of controversial historical figures began in the UK town of Bristol where protesters took down a bronze statue to a former slave trader and dumped it into a river. Statues to confederate generals in the US, slave traders and even revered UK leader Winston Churchill have been destroyed, damaged or vandalized.

The killing of George Floyd at the hands of Minneapolis police in late May sparked a wave of protests against police brutality and institutionalized racism which spread to all 50 states and numerous countries worldwide.

MOSCOW, June 12 (Sputnik) - Law enforcement officers in the Australian city of Sydney have disrupted a planned protest on Friday against the deaths of indigenous people in police custody, according to domestic media reports.

According to the SBS broadcaster, demonstrators did not apply for permission to hold the rally, and law enforcement officers set up barricades outside the city’s Town Hall and Hyde Park ahead of the protests that were expected to begin at 18:30 local time [08:30 GMT].

"As you've seen this evening a significant police presence was put on the ground to deal with any eventuality when it came to what was an unauthorised public gathering," New South Wales Police Assistant Commissioner Mick Willing said at a press conference on Friday, as quoted by the broadcaster.

Last Saturday, at least 15,000 people staged a protest against racial inequality and police brutality in Sydney after a decision to ban the event was overturned at the last minute.

The Australian authorities have sought to limit large-scale public demonstrations in the country due to the ongoing coronavirus disease pandemic. A 10-person limit on public gatherings is currently in force in the country, although these restrictions will be eased from July, Prime Minister Scott Morrison said at a press conference earlier on Friday.

According to the Australian Bureau of Statistics, New South Wales’ Indigenous population is ten times more likely to be imprisoned than the general population.