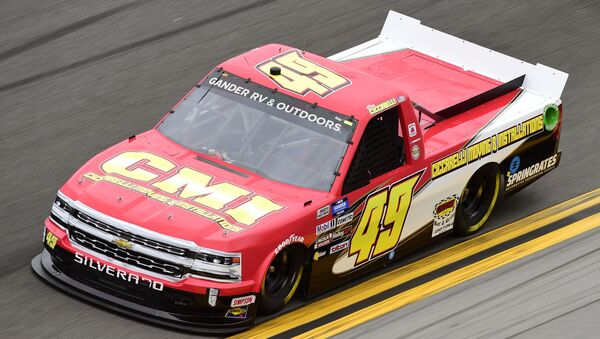 Apart from eliminating Confederate flags from all its events and properties, NASCAR also gave up on the requirement for its on-track personnel to stand during the US national anthem.

Part-time driver in the NASCAR Gander RV & Outdoors Truck Series Ray Ciccarelli announced in a Facebook post on Wednesday that he is quitting the NASCAR Truck Series over a disagreement with its recent moves.

Ciccarelli has made his Facebook account private recently, but the contents of his post on Wednesday have been circulating on social media. According to the driver, NASCAR's decision is based on marketing and political bias, and also punishes one group in order to satisfy another, which he does not want to take part in.

"Well its been a fun ride and dream come true but if this is the direction Nascar is headed we will not participate after 2020 season is over , i don't believe in kneeling during Anthem nor taken ppl right to fly what ever flag they love. I could care less about the Confederate Flag but there are ppl that do and it doesn't make them a racist all you are doing is f**king one group to cater to another and i ain't spend the money we are to participate in any political BS!! So everything is for SALE!!", he said.

NASCAR decided to get rid of Confederate flags right after its Cup Series' only full-time black driver, Bubba Wallace, called on the company to ban them. "No one should feel uncomfortable when they come to a NASCAR race", Wallace told CNN. "So it starts with Confederate flags. Get them out of here."

Two days later, NASCAR said the Confederate flag at its events runs counter to "a welcoming and inclusive environment" for fans and participants. The decision comes in the wake of the Black Lives Matter protests that have swept across the United States following the death of Minneapolis resident George Floyd.