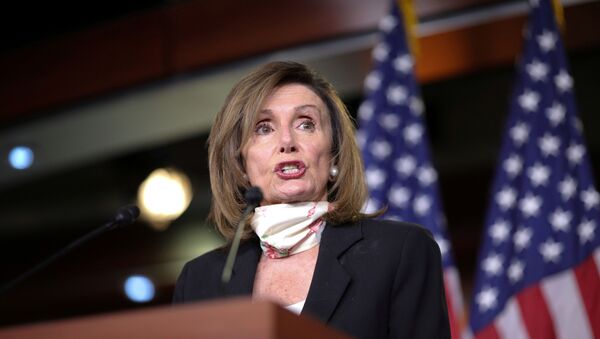 © REUTERS / Tom Brenner
Subscribe
Lilia Dergacheva
All materialsWrite to the author
As BLM protests continue to rage across the United States, ignited by George Floyd’s horrid death in police custody on 25 May, demonstrators in southern states have been increasingly targeting Confederate monuments honouring the Civil War figures convicted of treason after the bloody confrontation ended.

Democratic House Speaker Nancy Pelosi wrote a letter Wednesday requesting to get 11 statues of Confederate leaders removed from the National Statuary Hall collection at the US Capitol.

"The statues in the Capitol should embody our highest ideals as Americans, expressing who we are and who we aspire to be as a nation", Pelosi wrote in a letter addressing Missouri Senator Roy Blunt, who chairs the Joint Committee on the Library, and vice chairperson of the committee California Representative Zoe Lofgren.

She stressed that "monuments to men who advocated cruelty and barbarism to achieve such a plainly racist end are a grotesque affront to those ideals".

In comments to Newsweek, Sen. Blunt's office noted that each state decides on its own what statues to send to the capitol, and Pelosi's letters have no authority in determining this. "Several states have moved toward replacing statues and others appear headed in the same direction. This process is ongoing and encouraging", Blunt’s office explained, further referencing Pelosi's request:

"As Speaker Pelosi is undoubtedly aware, the law does not permit the Architect of the Capitol or the Joint Committee of Congress on the Library to remove a statue from the Capitol once it has been received".

Among the statues apparently meant by the House Speaker were those of Confederate States of America representatives Jefferson Davis and his Vice President, Alexander Stephens, both of whom were accused of treason after the 1861-1865 Civil War.

Pressure to get Confederate monuments removed has been mounting across the country in light of protests against the death of African American George Floyd at the hands of police in Minnesota.

Demonstrators have literally attacked Confederate statues in some southern US cities, defacing them with graffiti and at times attempting to pull them down in protest acts of vandalism.

This has prompted mayors in some cities to have the statues transferred somewhere else from their original places. Regarding the Capitol monuments, Kentucky Governor Andy Beshear expressed an intention to get a statue of Davis removed from his state's capitol, arguing that it "is a symbol that divides us, and even if there are those that think it's a part of history, there should be a better place to put it in historic context".

The US has been engulfed in sweeping protests for the past two weeks against the late May killing of black truck driver and bouncer George Floyd, which has since become a catalyst for change, with the marches against police brutality not infrequently growing into violent BLM riots against social and racial injustice not merely across the US, but well beyond.