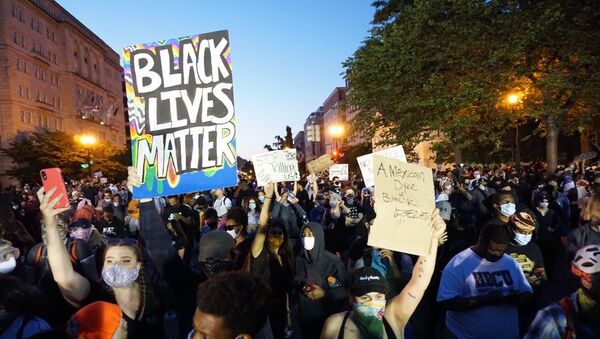 © Sputnik / Artur Gabdrahmanov
Subscribe
The ongoing anti-racism protests have been prompted by various reasons which are going beyond the problem of police brutality and supposed racial bias against African Americans in the US, say American academics, shedding light on the driving forces and the timing of the unrest.

The death of George Floyd, a 46-year-old African American man, last month became the catalyst for nationwide protests against racism and police brutality.

The US has not seen such a massive protest movement since the 2014-2015 Ferguson unrest over the deaths of two African American men, Michael Brown and Eric Garner, killed by white policemen. Black Lives Matter, an organisation founded in 2013, has raised the banner to fight racism urging the authorities to defund and even dismantle the police.

'Actual Threat to Blacks is Over-Exaggerated'

"The treatment of African Americans by law enforcement and the justice system has historically been unequal", states David Goldfield, Robert Lee Bailey professor of history at UNC Charlotte.

Although at particular times the US police have harassed the Irish, Italians, Jews, Hispanics, and Chinese, such treatment has receded, he notes. In contrast, the US is still struggling to "incorporate African Americans into society on an equal basis", although "the civil rights movement of the 1950s and 1960s ended racial segregation in public facilities and secured voting rights", the professor highlights.

Goldfield believes that the history of police brutality against black people in America is rooted in the era of slavery and still continues today.

Dr Carol M. Swain, retired Vanderbilt professor of political science and law, does not share this stance, presuming that "non-stop media coverage over-exaggerates the actual threat to blacks". To back her assumption she cites a June 2020 op-ed by Heather MacDonald, a US attorney and a Thomas W. Smith Fellow at the Manhattan Institute.

According to MacDonald's study, out of 1,004 mostly armed people fatally shot by police officers in 2019, 235 or roughly a quarter, were African Americans; and this ratio has remained stable since 2015. When it comes to fatalities among unarmed civilians, in 2019 the police shot 19 unarmed whites and nine blacks, or 30%. At the same time, in 2018 African Americans comprised 53% of known homicide offenders and committed about 60% of robberies, though the minority group constitutes just 13% of the US population.

Yet another study, conducted in June 2018, further throws the purported police racism problem into question finding that non-white policemen kill both black and Latino suspects at significantly higher rates than white officers, which could be due to the fact that "minority police officers tend to be assigned to minority neighbourhoods", the study says. 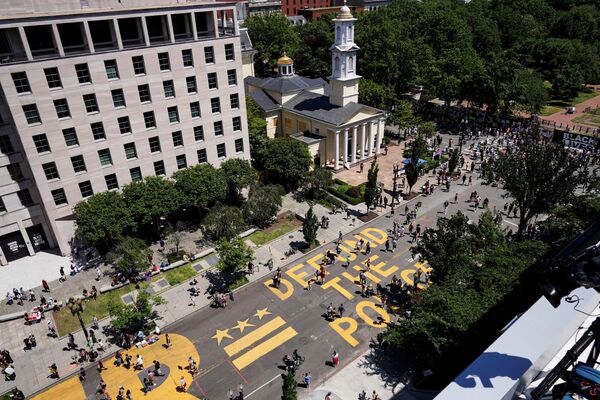 A sign painted by protesters stating "Defund the Police" is seen next to a Black Lives Matter sign as people demonstrate against the death in Minneapolis police custody of George Floyd, near the White House in Washington, U.S., June 7, 2020
© REUTERS / JOSHUA ROBERTS

One might wonder, however, as to why the protests have engulfed the nation regardless of the widely quoted statistics in public sources.

"There are two reasons", responds Dr Carol M. Swain. "More people have seen with their own eyes the videotape depicting George Floyd's final minutes on earth and the officers' indifference to his suffering. I believe the story is getting more attention because it is an election year and Democrats see a potential to hurt President Trump by attacking him on his call for law and order".

Looting, robbery, arson, and chaos related to the protests "definitely hurts the people who need police protection and reform", the professor says, suggesting that BLM objectives "might be quite different from the goals of the protesters concerned about police brutality and discrimination".

To add insult to injury, many of those who supposedly died at the hands of rioters were African Americans, including 77-year-old retired St Louis police captain David Dorn who was shot dead by looters, 53 year-old federal officer Dave Patrick Underwood, or 22-year-old civilian Italia Kelly.

Vandalism and looting prompted a number of national African American leaders to denounce the rioting, acknowledging that many black youths took part in it along with various extremist groups. “It was disheartening to see the results of what happened to what started out as peaceful protests", admitted Thomas W. Dortch Jr., the chairman of the Atlanta-based civil rights group 100 Black Men, speaking to Fox News.

Youths are Deprived of 'American Dream'

There is a serious societal problem that is still forcing young people of various ethnic groups to take to the streets in the US, stresses David Goldfield.

"The importance of the nationwide demonstrations transcends the issue of policing", he believes. "Take a look at the crowds of demonstrators. In the past, most of the protesters of police violence have been African American. Now, it’s multi-racial, with Hispanic, Asian, and white Americans joining together to demand change. And they are young".

What's behind this is that they are being deprived of the "American Dream" due to "growing economic inequality and the paralysis of our political system", Goldfield observes.

"We are a more equal and just society than we were in 1776, but we still have some way to go before we reach that ideal", he says. "Hopefully, sooner rather than later, we will be able to head in the righteous direction again and resume that journey".

000000
Popular comments
I have been saying this for a month! Analysts of important news agencies should wake up and expose the truth faster. It was obvious since the beginning that these protests were not only for the death of George Floyd, which was just the spark that detonated the explosive. If ANTIFA and other Soros backed groups tried to dominate the scenario (as this is exactly what they did everywhere before!), it is just because they are trying to CONTROL the sequence of events!!! The truth is: there is a worldwide rebellion against the system, and it cannot be controlled by the neoliberal’s kind of identity claims as it is MUCH MORE powerful than that.
Rita Lamar
11 June 2020, 08:50 GMT5
000000
......inequality brings it on,but there are other elements at play here,such as Soros,with their own agenda.....a NWO.......those genuinely demonstrating for change have been hijacked & used for other's nefarious ends ..........