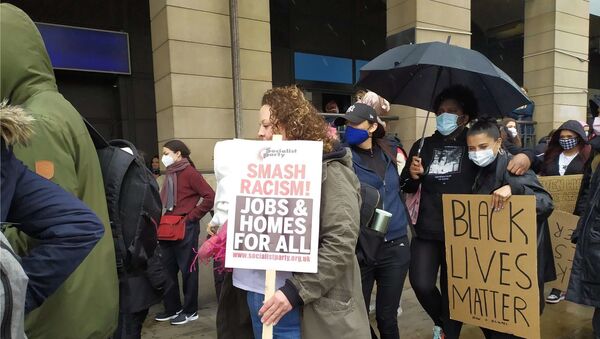 © Sputnik / Mohamed Elmaazi
Subscribe
A UK government adviser stated on Tuesday that Britain must be braced for widespread riots this summer, warning that poorer people and areas will be hit harder by the fallout of the coronavirus.

Political commentator Michael Swadling from The Croydon Constitutionalists has shared his views on the matter.

Sputnik: We’ve heard warnings today that the combination of inequality, anger at the police, enforcement of restrictions becoming “pretty impossible”, and lingering anger over the Dominic Cummings affair will likely result in widespread riots across the country. What do you make of these warnings? Is this a scenario that you can imagine taking place?

Michael Swadling: I think it's reasonable to think it's a scenario that could happen. I think also the feeling that we've had enough of experts is ringing true here again. "Likely to take place" is a stretch and we clearly should hope that everything happens to avoid that, but right now everything is there for things to go wrong.

We do have people who have been locked up for a long time; unemployment is now coming through as businesses are going back and deciding maybe they don't want to open up or don't open up in the same way. And the pictures we've seen over the past weekend where the police have, frankly, allowed mob rule on the streets - that's not the protesting, but that's the violence and the graffiti, and pulling down of statutes that happened afterwards - that doesn't stop things happening. That's not a good place to be. People need to understand that if they break the law, the police will intervene and stop them and that's not the message that's been coming from our police forces or our government.

Sputnik: The individual responsible for the warnings, Professor Clifford Stott from the SAGE advisory body, compared his prediction to the scale of the London Riots of 2011. Now, can you expect these tensions to really grow to the size that we witnessed nine years ago? They were very prolific riots, I'm sure you understand that more than most, being from London. What impact would riots of that size have on the UK if this were to take place again?

Michael Swadling: Yeah, I remember those riots very well. I live in Croydon and there were a couple of major fires in Croydon and I could indeed see them from the back of my house. Do I expect them to happen again? I would hope not, but the government needs to act quickly to make sure it doesn't and there're some very basic things it can do. Lift the lockdown; get people back to work - it's very hard to be rioting when you're in your job, people will be busy and tired and that's a much better place for people to be than bored and angry.

They need to show that there is in fact one rule for all. You can't allow some protests and not others. If people break the law, then the police have got to be seen to be taking action. People have got to know there is a real risk of them being caught and apprehended or just, frankly, stopped by the police and not have the police running away from mobs, as we've seen this past weekend. The government's got to get a grip of this situation and then you quell the chances of people thinking "Oh, I'll chance my arm. I'll give it a go. I'll get away with it".

What will be the long-term impact? The nature of riots, I'm thinking of the 2011 riots, I don't know what changed - I saw a lot of people who maybe got some new Nike trainers as they were looting, but I don't know what really changed out of the 2011 riots. I think the long-term implications of these are not necessarily so massive, but the short-term implications of course will be a lot of destruction and terribly unfortunately some deaths. Frankly, the government and the police force just need to get a grip of the situation if violence does start; but, importantly, to try and head it off from happening, get our country out of lockdown, get us back to work, and get our economy going again.

Sputnik: It seems like in your view, the police and the government at large aren't doing enough right now to quell some of these tensions which are growing. If the government continues down this route of letting the current scenes roll on, what will happen with that? What will be the real failure of that in your eyes?

'Completely Nuts': Black UK MP Against Renaming ‘Racist’ Uni Hall
Michael Swadling: The real failure here is that the police and the government at the moment - it's not clear that they are treating one rule for everyone and that's never a good position to be in. That will only fuel resentment and it will fuel the chances some people think they can get away with more than others and again that's not a good thing. Protests are great and in a democracy should be encouraged. Now, you can't have protests when you have other people in lockdown and the government just needs to fix that problem. I suggest the best way to do this is to lift the lockdown.

If protests turn into violent activities or destruction of property, then that has to be stopped and it's not a complex set of decisions here. You can have a good reason to be out, but a bad action that you're taking. So, a decent protest - a protest against racism is a perfectly righteous thing to do, but if you're throwing bricks at police horses, you need to be stopped. If you're vandalising property, you need to be stopped.

Equally you could have a bad reason or a reason [where] people don't necessarily disagree with the protest, but be doing it in a reasonable and responsible manner - that's perfectly fine. In a liberal democracy we have to allow protests. It is a really important part of our democracy, but when it gets out of hand, the police have to be seen to act. They didn't do that this weekend. In fact, the chief constable, I believe it was from the Bristol area, was basically saying "we're letting it happen, we're choosing to let this happen". That's not a good place to be. That's not a place that's going to keep the streets safe.