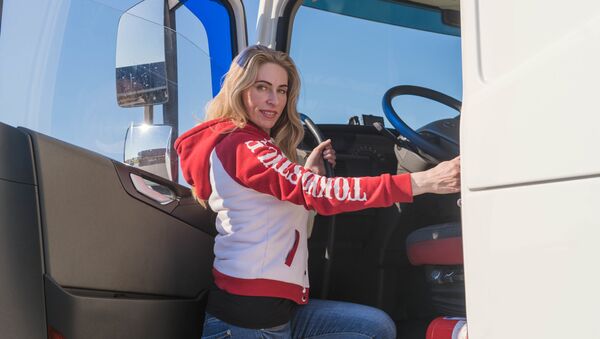 You can see this beautiful blonde in various cities in the Kaliningrad region, but she is neither a guide nor a model, even though people take lots of pictures of her at traffic lights.

She is often offered help, but she always says she can do it herself – 35-year-old Svetlana Masterskikh from Guryevsk (15 km from Kaliningrad), a mother of two and the only long-distance trucker in the region, has followed this motto her whole life.

'Buy Me a Truck!' I Asked My Husband

Svetlana started dreaming about driving a truck 15 years ago. Together with her husband, they owned a transport company that consisted of 20 heavy trucks, but at the time she didn’t dare to drive them.

"I’ve always loved big cars. I watched our drivers working, and asked my husband to buy me a heavy truck. But at the time, our children were still small, and I understood that I couldn’t go on round trips", Svetlana Masterskikh said.

During the financial crisis, the couple had to give up the company. Strangely enough, it was the divorce that happened later that helped Svetlana realise her long-cherished dream. In order to be able to raise her children and pay rent, she got a job as a taxi driver – she had been driving since she was 18 and had several driving license categories – B, C, and E. However, it was by sheer luck that she changed her passenger car to a heavy truck. One day, she had a passenger who turned out to be an employee of a transport company where for several months she had been sending her CV – although to no avail. The passenger turned out to be a trucker and, having learnt Svetlana’s story, he promised to help arrange an interview.

"In the interview, the employer first started intimidating me, saying that there were only men on the team. But I said that I wanted to drive a truck, because I was obsessed with it. Even when I was driving a passenger car and saw a heavy truck on the road, it took my breath away. Finally, they told me to make a driver card and signed me up for driving courses at the International Road Transport Union", Svetlana said. 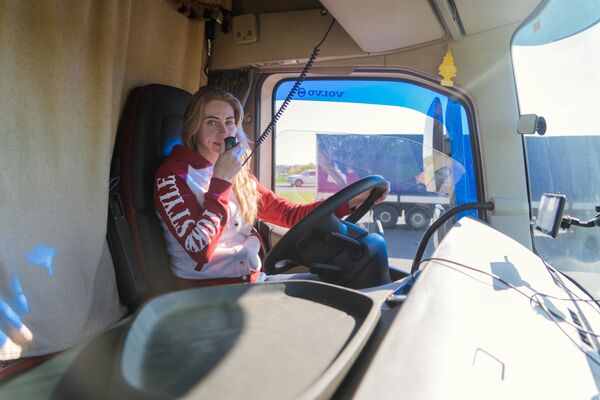 She didn’t believe what was happening until the very end: "I thought they employed me rather quickly and there was probably some sort of a catch. I’d take the course, and they would tell me to get out of here. When I completed the course and showed up at their doorstep, I realised that they were really waiting for me, everyone was wondering who I was".

The Male Team Respects Me

According to Svetlana, the team was watching her for a long time. Not many believed she could handle it.

"When the drivers saw me for the first time, they said that I would ‘run away’ in a month or two, because it’s hard. There were those who always tried to help, but I said that I had come there to work, and I didn’t need any help. If you want to show me how to do it, show it", Svetlana reminisced.

Incidentally, she is the only woman in the Kaliningrad region who is officially employed as an international driver. "When I completed the course, the staff said that I was the third woman in their memory, but the other two girls had learned to drive a truck in order to be able to replace their husbands whom they travelled with", she explained.

Svetlana has been working as a duty truck driver for eight months now. She is entrusted with four vehicles – Man, Mercedes, Scania, and Volvo, and is free to change them several times a day.

"In terms of driving complexity, they are the same. It’s just that there are old and new cars, AT and MT cars", she said.

The male team respects Svetlana, they treat her as a fellow driver. She isn’t bothered with questions as to how this is possible with her appearance. “It all depends on how you present yourself. Of course, at first there were ‘slippery’ moments, but I nipped them in the bud”, she explained, adding that other drivers try not to swear in front of her, and if they do, they immediately apologise.

There’s No Room for Sentimentality When You’re a Trucker

Svetlana is mainly engaged in goods transportation across the Kaliningrad region; she transports raw materials for the local furniture industry, for example, from Kaliningrad, where the company is based, to Sovetsk or Gusev, on the opposite end of the region.

"During the two hours it takes me to get there, I can enjoy the unusual local nature – there’s good view from the truck’s cab. You drive, and your heart fills with joy when you look at all this", she said.

But she immediately makes it clear that there’s no room for sentimentality when you’re a trucker. Svetlana carefully prepares for each trip.

"Before the trip, I always draw a route. I should know in advance where safe parking spots are, because I’m responsible both for the cargo and for the car. Anything can happen on the road. Road gangsters still cut awnings, pull out cargo, and remove wheels. This is because drivers unwittingly stop on road shoulders or at suspicious parking lots, which are not guarded at all", Svetlana said.

On all her trips, the woman has a tachograph in the truck’s cab. 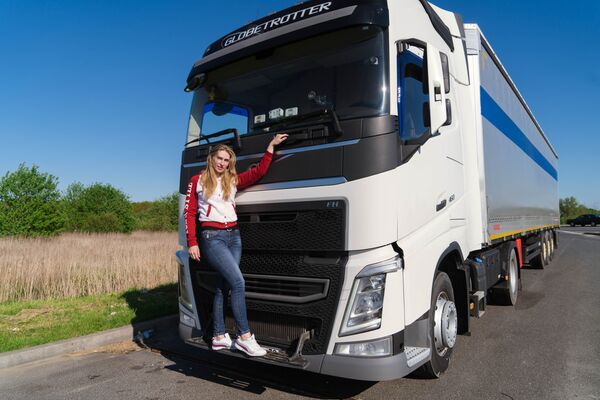 This is a device that controls the hours of work and rest. For example, after driving for 4.5 hours, the tachograph will remind the driver to take a 45-minute rest.

"It’s better to observe the work and rest regime. Even if there’s a half-an-hour drive left and the driver feels like they are falling asleep, it’s better to stop and have a nap", she explained.

Truckers are not immune to possible breakdowns on the road, but Svetlana is sure that you can find a way out of any situation.

"You know how the hood opens, you can call a mechanic, describe the situation, and ask what can be done. Even if a wheel breaks, the other wheels still spin. Even if you get a flat tire, it is usually only on trailers - this is quite rare with tractors. Of course, you can easily get to the nearest tire fitting with the remaining wheels. But if the tractor suddenly gets a flat tire, use the walkie-talkie to ask other truckers for help, they will always stop and help", Svetlana said.

'I Say I Can Handle It Myself – This is My Job'

The trucker not only delivers cargo, but also ensures that it is loaded and unloaded in accordance with all the rules. There are no exceptions for delicate Svetlana. Like other drivers, she alone uncovers the tent’s sidewall, rearranges the beams on the trailer, throws the tent up, or raises it so that the cargo can be easily loaded.

"When they load the cargo, I have to put on the fastening straps so that it doesn’t slide off when I make turns. But I enjoy all this. Sometimes they offer me help. But I say that I can handle it myself – after all, this is my job. Of course, there are nuances when I need to throw an awning up and I’m not strong enough to do that (there are awnings that are very hard to throw up). I see the movers and ask them for help; and they do it, no one says: 'This is your job'", she added.

The Poles Are Shocked

Svetlana never refuses to travel to Poland, but she recalls her first time going to the “neighbours” in Grajewo – she didn't sleep the day before the trip.

"They were scaring the drivers with the bad road. They said it was so narrow that trucks could hardly go there. And I started imagining that there were paving stones and narrow curbs. It was also freezing, and they forecast snow and rain. But when I went on the trip, I didn’t ‘notice’ the bad road at all, although it really turned out to be narrow; I had to slow down, because the road was zigzag, but I didn’t see anything terrible. The round trip went perfectly well. Although it was snowing, and sometimes the road was not visible", Svetlana said. 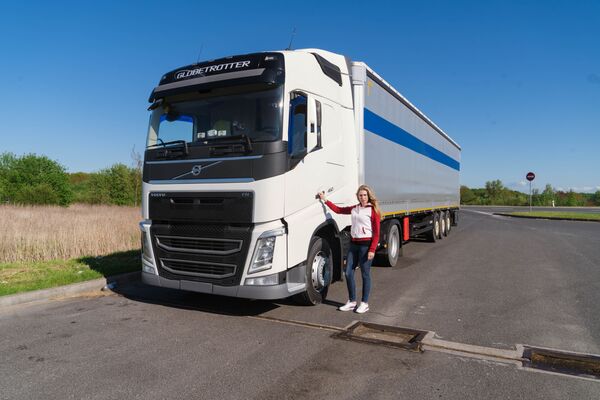 According to the woman, her driving a truck in Poland makes everyone excited – the Poles always welcome her warmly.

"When I drive a truck, everyone is shocked there. But they treat me very well. Whenever I go to Poland, it is always like this and never the other way round. Even when I drive a passenger car", she explained.

By the way, Svetlana’s appearance on the roads, whether Russian or Polish, doesn’t go unnoticed: people take pictures of her at traffic lights.

"Sometimes they start taking pictures of me through the window, they give me thumbs up. I am at customs quite often, clearing the cargo or getting customs clearance; other drivers come up and say: "It’s so hard to drive such a huge car". I say that there’s nothing hard. "If I'm good at it, why not?""

Not Only Russia, but Also Europe

Svetlana is contemplating driving to Europe more in the future. But the problem is that her English is not good enough.

"To be honest, I want to go to Europe more. Because the conditions are better there. I speak from the point of view of a girl; for example, toilets. I drove around Poland, saw gas stations with cafes, and many parking lots where it’s not a problem to park a truck", Svetlana said.

But she doesn’t dare to go to Moscow and other Russian cities, because of possible traffic jams, including at the borders (Kaliningrad is separated from “big Russia” by the borders with Lithuania and Belarus). 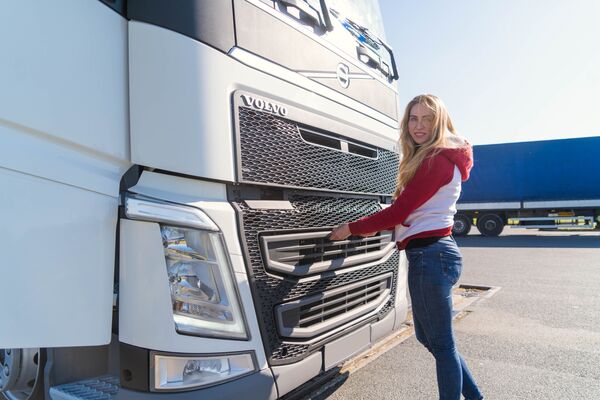 "Of course, you can use the walkie-talkie to apologise to other truckers and overtake them, but I’m not ready yet – I don’t want a drive to take more than one day. My 12-year-old daughter and son, who will be nine in two months, are waiting for me at home", she explained.

'If Kaliningrad Region Had Kamaz Races, I Would Win Them'

Svetlana’s children support her in everything she does, they understand that the family needs to save up to buy their own accommodation.

"My goal is to buy an apartment. I rely only on myself. Yes, maybe I don’t see my family as often as I would like to; but it all depends on what your priorities are. I understand that if I don’t put my strength into it now, nothing will come of it. And I don’t want to rent a flat my whole life", Svetlana said.

Although trucker forums say that you won’t make much money as one, she is convinced that this is not the case.

"I think that if you want, you will make money. I won’t make as much money as I make as a trucker anywhere in the Kaliningrad region, no matter how much I work", Svetlana explained.

Having come to Kaliningrad in 2000, she worked as a babysitter, seller, waitress, accountant, realtor, and even as a deputy’s aide. 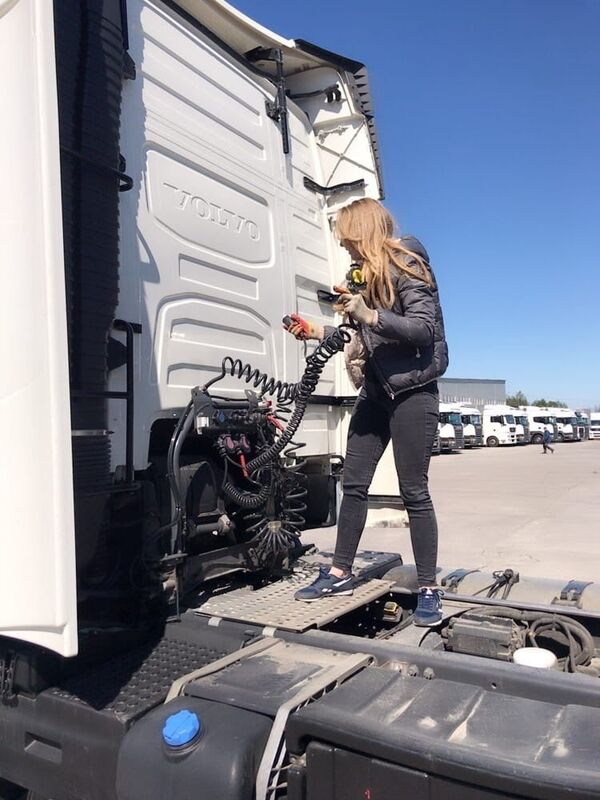 When asked if constant trips make it hard to stay in shape, Svetlana said that she was trying to look after herself, and had considered a diet for her trips.

"Truck drivers are overweight because they like to eat. They talk about how they stop in the parking lot, they all get together, relax; they cook pilaf and shurpa. Or when they wait a long time for their turn at the customs, they can also eat something", Svetlana said.

Additionally, she is very fond of sports: she plays volleyball, basketball, and has been engaged in pistol shooting. "If the Kaliningrad region had Kamaz races, I would probably win them", she added.