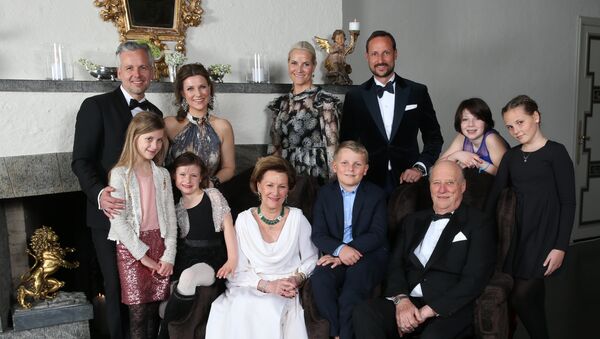 © AFP 2023 / Aserud, Lise / NTB SCANPIX
Subscribe
International
India
Africa
Norwegian Princess Märtha Louise claimed that she has been given a "crash course" in how "white supremacy" works by her black lover who is a self-proclaimed shaman and a healer.

In conjunction with the violent Black Lives Matter demonstrations in the US and Europe, sparked by the death of African American George Floyd at the hands of US police, the phenomenon of whites taking a knee has started to kick off.

In Norway, this trend received a royal touch as Princess Märtha Louise posted a photograph of herself and her three teenage daughters kneeling on her Instagram account.

The 48-year-old princess is seen holding up a sign with the promise to “listen, learn, and take action”. In the comment, Märtha Louise pledged support to her “black brothers and sisters”.

Although we can’t be at the protest in Oslo today because of the #coronavirus, we still support all of you risking your lives every day out in the world for change. And since everything has gone virtual these days, here is our protest: We fill our hearts with love and let it flow into the world so we may grow into individuals who can support our black brothers and sisters because we know that black lives matter! Enough is enough! We will listen and learn to become the best allies we can be. And WE WILL TAKE ACTION. #blacklivesmatter #georgefloyd #blm #protest #enoughisenough

Märtha Louise also explained that she has been given a “crash course” in how “white supremacy” works by her black lover, Durek Verret, who claims to be a shaman and a healer.

“I, as a white person, need to grow, educate myself and become better and move from being against racism to being anti-racist”, she wrote.

Being @shamandurek ‘s girlfriend has given me a crash course in how white supremacy is at play and the way I have consciously and subconsciously thought of and acted towards black people. How I have taken my rights for granted - never looked properly at what racism really is, because it has been comfortable for me that the system is in place. I am not proud of it, but I realize I need to grow into understanding this deeply rooted system to be able to be part of the dismantling of it. I, as a white person, need to grow, educate myself and become better and move from being against racism to being anti-racist. Racism is not just the obvious (which I thought it was), of the openly discrimination, mistreating and killing of black people which is easy and obvious to take a stand against. It is in the details (which I had no idea still existed). It is in the way people shy away from Durek. How friends assume he lies about everything. That he is evil for being kind. The words muttered under their breath, making it perfectly clear to him that he does not have a natural place at the table. People at high places saying “How dare you think I would touch your hand?” when he reached out his hand to say goodnight (pre Covid-19). People thinking they aren’t racist, but don’t know anyone with a different skin color than their own, apart from the people working for them. How it is assumed that Durek is not a good person who actually loves me, but has manipulated me into loving him and keeps manipulating me in our relationship. How he will exploit me financially. The press presents him as a liar, being violent and a threat to my family and myself, sharing scrupulously his X’s story without checking facts, because it supports the belief system already in place about him. THAT IS RACISM! We have both received death threats for being together and have weekly been told that we shame our people and families for choosing each other. The reality of it all is that I love how he holds space for me as a woman, listens to my wisdom and shows up for me and my girls. I love how he shares his wisdom with the world CONTINUES IN COMMENTS 👇

"Rich white folk telling us their point of view. Be quiet please", one viewer wrote sarcastically.

"Maybe educate yourself that Floyd was a criminal? He beat up a black pregnant woman because he wanted money for drugs. Also, he was convicted 5 times. I can't understand how it can get so crazy. Stand paying homage to a criminal, just because you want clout on Insta... grow up", another one wrote.

"So what happened to the black police officers that were brutally killed due to this unprecedented violence sweeping my country? Their lives don’t matter because they are police?", another reply said.

"The whole comments is a torrent of faggotry and virtue-signaling cringefest from upper class libtards living in gated communities", one unimpressed reply said.

On the other hand, many were elated about Märtha Louise's commitment.

"Wow what a role model you are as a mother with your three beautiful strong daughters!", one enthusiastic reply said.

"Sooo proud to have such a model. Many heartfelt thanks for giving a voice to such an important fight. Never stop impressing, never stop being so open and loving", another one said.

Last but not least, Märtha Louise also received an ovation from Verret himself, who wrote: "Your [sic] so beautiful .. gorgeous".

She also received a token of appreciation from Norwegian Crown Princess Mette-Marit.

Princess Märtha Louise of Norway is not a member of the royal house, but is active as a businesswoman. She is a self-described clairvoyant, who led an alternative therapy centre commonly referred to as an "angel school", which among other things provided training in communication with angels and the dead.

She was married to the late writer and visual artist Ari Behn from 2002 to 2017, who later committed suicide. In 2019, she publicly announced her romantic relationship and professional collaboration with Durek Verrett, a self-described US shaman.

Since late May, African American man George Floyd's death at the hands of the Minneapolis police in Minnesota has sparked a worldwide movement against police brutality and social injustice, sweeping all of the US states and most of Europe. Many of the protests hailed as righteous by activists and politicians have turned into rioting rife with violence against police and civilians, acts of vandalism, arson, and looting.