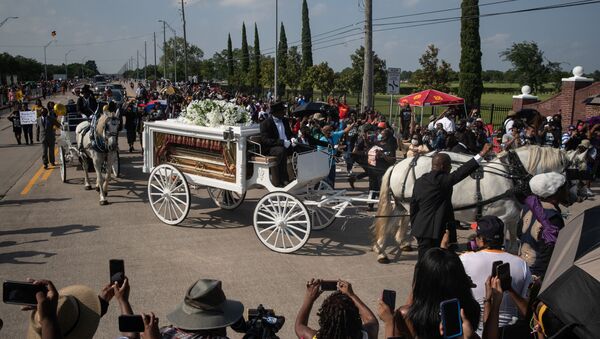 © REUTERS / ADREES LATIF
Subscribe
Lilia Dergacheva
All materialsWrite to the author
The funeral of George Floyd, a black man now perceived as a catalyst for change, marked the end of nationwide mourning, two weeks after he died while in Minnesota police custody.

George Floyd was remembered Tuesday as "Big Floyd", a rapper nickname from his early years at his funeral in Houston, where the man was raised.

After several hours of emotional tributes from Floyd’s family, a song from Ne-Yo, a recorded message from Joe Biden, and a eulogy from the civil rights activist Al Sharpton, Floyd’s golden casket was carried on the shoulders of pall bearers out of the Fountain of Praise church in Houston.

The funeral capped six days of mourning for Floyd, whose horrid death at the hands of a white policeman has sparked international protests, affecting almost every US state, with particular emphasis on three cities: Raeford, North Carolina, near where he was born; Houston, the city of his youth; and Minneapolis, where he was killed.

After the service, Floyd’s golden casket was taken by hearse to a cemetery in the Houston suburb of Pearland to be laid to rest next to his mother.

A short distance away from the cemetery entrance the casket was carried to a glass-sided carriage drawn by a pair of white horses, with his casket being taken inside the mausoleum to the sounds of a brass band.

Floyd's Death Sparks Int'l Reaction in Wake of Garner, Martin, Diallo and King: Why Him, Why Now?

Hundreds of people gathered along the procession route in the blazing Texas sun, some chanting, "Say his name, George Floyd".

The death of Floyd, Minneapolis-based neighbourhood mentor and truck driver, amateur basketball player, and rapper on 25 May has sparked nationwide protests in the US and well beyond, after a cell phone video emerged of a white police officer kneeling on his neck and back for what prosecutors said was almost nine minutes during his arrest for allegedly using counterfeit money.

The policeman didn’t ease up his hold on Floyd even after the man begged to let him breathe, as could be heard in the video.