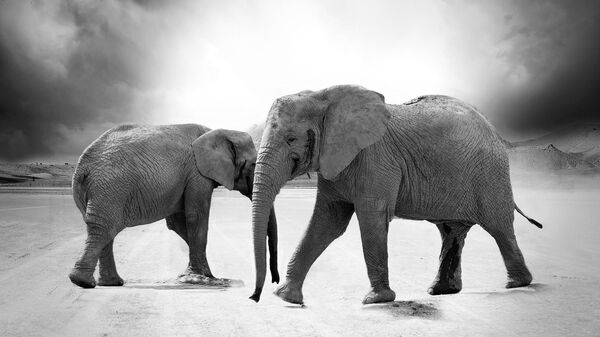 New Delhi (Sputnik): The recent death of a pregnant elephant, who purportedly ate a pineapple stuffed with explosive in India's Kerala has triggered nationwide outrage. The death has initiated the "All Lives Matter" campaign in India.

In a bid to ensure that his two beloved elephants don't suffer after his death, a man in the Indian state of Bihar state has transferred his entire landed property to them.

Akhtar Imam, 55, who heads the Asian Elephant Rehabilitation and Wildlife Animal Trust (AERAWAT), has transferred his entire 6.25 acres of land to his two pet elephants - Moti (20) and Rani (15). Both of them stay with him at his residence in the state capital Patna. He considers them his family and is very attached to them.

"Since I was 12, I have been taking care of elephants...  I have transferred my entire landed property to them so that they don't starve after my death", Imam said, while reminiscing about an incident where Moti saved his life from a gun-toting criminal.

"Last year, some miscreant armed with a gun tried to enter my room in order to kill me. But Moti started trumpeting, which woke me up. I was able to raise an alarm. Moti freed itself from the iron chain and ran after the miscreant who fled", Imam said.

Fearing for his life from his relatives, Imam says as per the property deed, the landed property would go to (AERAWAT), the Trust he is working for after the elephants would die.

According to experts, Asian elephants live for around 48 years in the wild, while African elephants have a median life-span of 56 years.

Imam says the shorter life span of elephants here is due to poaching or illegal hunting for ivory or other items, destruction of natural habitats, and droughts.