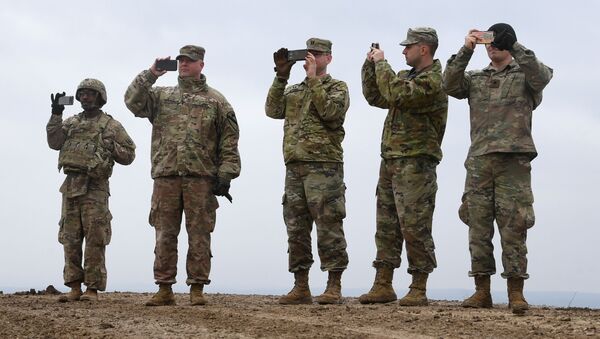 Oleg Burunov
All materialsWrite to the author
On Monday, Peter Beyer, a member of Chancellor Angela Merkel's ruling conservative CDU/CSU bloc, slammed Washington's intention to withdraw thousands of its troops from Germany as “completely unacceptable” because he said the US had not informed “NATO ally Germany in advance”.

Reuters has cited five unnamed sources as saying that President Donald Trump’s decision to withdraw more than 9,000 American troops from Germany blindsided an array of senior US officials.

The move was first reported by The Wall Street Journal (WSJ) last week and has not been officially confirmed by the White House, with the Department of Defence reportedly yet to receive a formal order related to the withdrawal.

One of the sources claimed that high-ranking State Department, Pentagon, and National Security Council officials "learned something was up when calls started coming around and the WSJ article hit".

Another source argued that even though "it [the decision] wasn’t a surprise" given the strained ties between the US and Germany, "there was no consultation or coordination, and Trump administration officials had said they did not expect a withdrawal of [US] forces".

One more source insisted that the move was motivated by German Chancellor Angela Merkel's unwillingness to attend a G7 summit in the US due to the coronavirus pandemic.

The source asserted that "this was originally only done at very high levels" and that former US Ambassador to Germany Richard Grenell "was involved".

"This was kept extremely close hold", the source said, adding that the decision was "sped up because he [Trump] was mad at Merkel for cancelling his G7 party because of COVID".

While the National Security Council declined to comment, Grenell described the sources' claims as "gossip", and said without elaborating that the US troop reduction had been "in the works since last year".

NATO Secretary General Jens Stoltenberg, for his part, remained tight-lipped on what he dubbed "media leakages and media speculation", only saying that the alliance was "constantly consulting with the United States, with other NATO allies on the military posture, presence in Europe".

The developments come after Peter Beyer, a member of Merkel's ruling conservative CDU/CSU bloc and Berlin’s coordinator for transatlantic ties, lambasted Washington's reported move to cut US troops in an interview with the newspaper Rheinische Post.

"This is completely unacceptable, especially since nobody in Washington thought about informing its NATO ally Germany in advance", Beyer pointed out on Monday.

He echoed German Foreign Minister Heiko Maas who earlier expressed regret over the US move, admitting in an interview with the newspaper Bild am Sonntag that Berlin-Washington relations remained "complicated".

Trump Orders Pullout of 9,500 US Troops From Germany

This was preceded by the WSJ quoting unnamed US government officials as saying last Friday that Trump had ordered the Department of Defence to withdraw about 9,500 American troops from Germany by September. The sources added that POTUS also directed the Pentagon to cut the total number of US troops that may be stationed in Germany at any one time from 52,000 to 25,000.

The move was reported as the US and Germany remain at odds over a number of pressing issues, including trade, Iran, and NATO-related military spending.

Last year, Trump blamed Berlin for failing to pay its "fair share", adding that although he has "a great feeling for Germany, […]  they're not paying what they should be paying" and that it is the US which is paying for "a big proportion of NATO".

000000
Popular comments
If I was a German, I would be thrilled of the U.S troop reduction and hopefully total pullout in the near future. Apparently some people in the German elites still suffer from the Stockholm syndrome 75 years after.

danielmartin516
9 June 2020, 09:43 GMT
000000
80 percent of the German population want the warmongering U.S. occupants gone. These have been the findings of several surveys. The only ones crying their eyes out are transatlantic traitors on the payroll of the CIA or organizations such as "Atlantikbrücke", like this Peter Beyer guy. No one has ever heard of this parliamentary backbencher except now when he goes on batting for his masters in Langley, VA. Germany's only military threat is that of a U.S. attack against Russia, since most Yankees believe that such an act could be limited to European territory only. That's how ignorant and stupid the majority of the U.S. population indeed are. It's about time for the Yankees to pack their bags and go back across the pond and never return, especially not their drunk, obnoxious and uncivilized tourists. Ami go home!