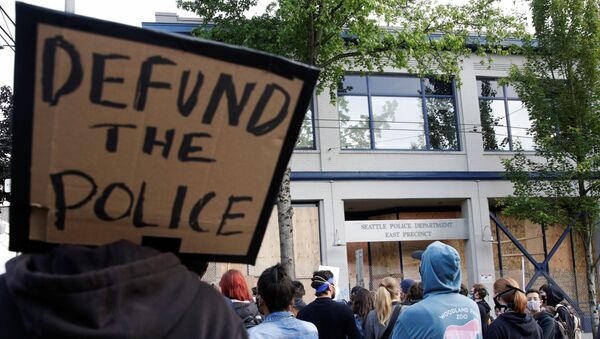 Protests continue in the United States after the National Guard was ordered to withdraw from Washington DC, as well from cities in California, hit by the mass rallies.

Mass rallies erupted in Minneapolis and then engulfed the entire country after George Floyd died in police custody following a violent arrest. A video depicting the incident showed white police officer Derek Chauvin pressing his knee to Floyd's neck for eight minutes, while the handcuffed man repeats he can't breathe until fainting.

After the arrest Chauvin was charged with second-degree murder, while three other officers involved in the incident have been charged with aiding and abetting the murder.

Many of the protests quickly turned into riots, complete with violence against police and civilians, vandalism, arson, and looting.

A US federal judge in the state of Minnesota denied a request for a temporary restraining order to prevent police from using force against journalists covering protests.

US Judge Denies Media Request for Restraining Order Against Police Amid Protests
23:05 GMT 09.06.2020

HOUSTON (Sputnik) - A horse-drawn carriage brought George Floyd’s body to a Houston area cemetery where he was laid to rest in a private ceremony fifteen days after his death in police custody in Minneapolis ignited worldwide campaign against police brutality and racism.

Hundreds of mourners, many seated in foldable chairs under umbrellas and tents to protect them from the Sun, waited on Tuesday to watch Floyd pass his final terrestrial mile that led to a tomb next to his mother’s grave.

"We can't function as a department without the trust of our community and there are adjustments we can make to strengthen that trust,” said @PhxPDChief. “We pride ourselves on being an organization willing to learn and evolve, to listen to our community and become better." pic.twitter.com/XY9E6YeYky

GENEVA (Sputnik) - Around 10,000 people gathered in the Swiss city of Geneva on Tuesday to protest police brutality and racism toward black people in the United States.

Regional authorities authorised the route of the demonstration, which began in Old Town and ended at the United Nations office in the Palace of Nations.

The march was peaceful, a Sputnik correspondent said, with the majority of protesters wearing face masks. Police were present but chose not to interfere.

"It is time to do something officially representing the city to recognize the power of the fundamental idea - black lives matter", Mayor Bill de Blasio said. "The proposal put on the table was to name streets in each borough and to paint the words on the streets of this city".

De Blasio said the initiative will be implemented near the City Council in Manhattan and the remaining four locations will be identified later on.

In honor of the funeral for George Floyd, we ask all Minnesotans to spend 8 minutes and 46 seconds in silence at 11am this morning. pic.twitter.com/tZs4JdK1Bg

The president is tweeting conspiracy theories about the Buffalo incident based on no evidence, no proof.

Was the blood coming out of his head staged? Were our eyes lying to us? No.

The man is still in the hospital & the president is disparaging him.

On Sunday, hundreds of violent protesters at a Black Lives Matter rally in the Belgian capital threw rocks and bottles at police forces, who had water cannons at the ready.

Prime Minister Boris Johnson and his government did not participate in the minute of silence held by the House of Commons at 11 AM on Tuesday, according to the PM's spokesman. He noted, however, that Johnson and his ministers were discussing the Floyd case, as they were holding a meeting at the time.

A judge in Richmond has issued an injunction that blocks Virginia Governor Ralph Northam from removing a large statue of Confederate General Robert E. Lee from the state capital for 10 days.

According to the judge, the state agreed to protect the monument in an 1890 deed accepting the statue.

MOSCOW (Sputnik) – The French president's party, La Republique En Marche (LREM), said on Tuesday that later in the day it would join an international tribute to George Floyd, an African American man whose death by asphyxiation at the hands of a US police officer has triggered a global wave of protests against racism and police brutality.

“While the funeral of George Floyd, who was killed by a police officer in Minneapolis on 25 May 2020, will take place tomorrow at 18:00 Paris time, the La Republique En Marche will join the international tribute that will be given to him at the same time, observing 8 minutes and 46 seconds of silence in his memory", the party said in a statement.

Emmanuel Macron's party also stated that France needed to "hear the cry of anger demonstrated by a large part of the French youth in recent days to denounce racism, hatred and all forms of discrimination and violence".

At the same time, it added, separate manifestations of racism and violence do not represent the entirety of law enforcement. Moreover, the party said it supports announcements by French Interior Minister Christophe Castaner, who on Monday unveiled a series of reforms to ensure "zero tolerance" for racism by police. In particular, he banned the controversial method of strangulation during an arrest.

Macron has not made any comments regarding the death of George Floyd. Nevertheless, he has asked the government to accelerate plans about regulating protests against racial injustice and police violence, which have been taking place in France over the past week.

MOSCOW (Sputnik) - A man who drove a car into George Floyd protesters in the southeastern US state of Virginia over the weekend is an "admitted leader" of the white supremacist group the Ku Klux Klan, the Henrico County Commonwealth Attorney has said.

The incident happened on Sunday night in Lakeside in Henrico County. One person sustained injuries. They do not appear to be serious. The perpetrator, identified as Harry H. Rogers, 36, was later arrested.

"The accused, by his own admission and by a cursory glance at social media, is an admitted leader of the Ku Klux Klan and a propagandist for Confederate ideology. We are investigating whether hate crimes charges are appropriate", attorney Shannon Taylor said in a statement late on Monday, posted on her Twitter.

According to Taylor, the man drove into a peaceful protest over the in-custody death of African American man George Floyd in Minneapolis.

So far, the man has been charged "with assault and battery, attempted malicious wounding, and felony vandalism", the attorney said.