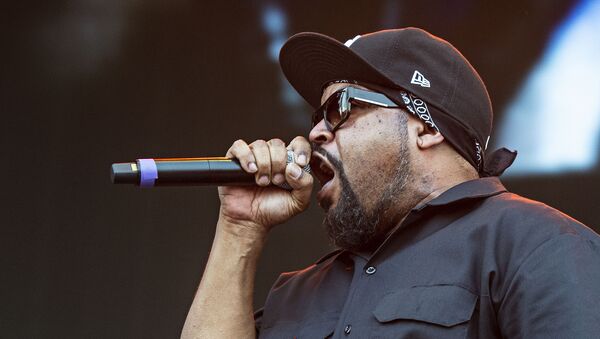 © AP Photo / Amy Harris
Subscribe
The American rapper has been accused of anti-Semitism based on a picture he posted, with netizens insisting that racial injustice cannot be battled through hatred towards any other ethnicities, let alone conspiracies. However, the author of the image insisted it was completely wrong “to weaponise” it.

Ice Cube, an American rapper and actor, has sparked a massive backlash after tweeting an image of a mural that was removed from a wall in London’s East End in 2012 after complaints that the image was anti-Semitic.

The image posted Saturday sports several men, seemingly businessmen and bankers of Jewish descent, sitting around a Monopoly board resting on the backs of naked black workers.

“All we have to do is stand up and their little game is over", the inscription in the picture reads, with Ice Cube, aged 50, adding his own caption to the post:

“F*** THE NEW NORMAL UNTIL THEY FIX THE OLD NORMAL!”

The post has generated a huge outcry online, with many explaining to him that this is a Mear One mural featuring "anti-Semitic tropes” and calling him to pull it from his page.

This is a Mear One mural featuring antisemitic tropes. Please take this down.

Dude! This is a racist mural. We can’t fight hate by hating on others. We gotta won this united, not divided.

You know Ice, if the only thing you have to use is something that is racist and oppressive towards another minority group, it really is time to rethink your whole argument.

“You're not helping. At all. Racism killed 6 million Jews. They aren't your enemy", one took a dig at Ice Cube.

However, artist Kalen Ockerman, aka Mear One, mentioned in quite a few comments as the author of the caricature, attempted to soothe the tensions and responded differently, saying this is “completely not true” and asking netizens to “stop weaponising” his art. “You have been mislead [sic]", he concluded.

This is completely not true. Stop weaponizing my art. You have been mislead.

“Zionism is racism. Anti-Zionism is anti-racism", another Twitterian struck back at Ice Cube’s accusers.

In response, Ice Cube, who has of late been massively tweeting in support of sweeping nationwide Black Lives Matter protests, wrote that he was “very concerned about the table in this image", but did not remove it.

The image by Los Angeles artist Mear One was painted on a building in London’s East End in 2012, however it was removed after it drew tonnes of criticism from the general public. Jeremy Corbyn, would-be Labour leader at the time, tweeted his support for the artist’s right to display it, but later backtracked on his approval, in the wake of the backlash.