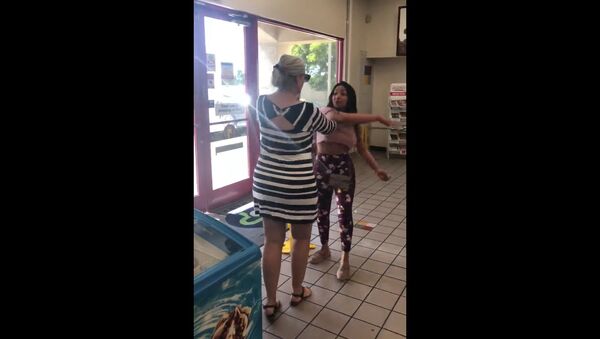 © Screenshot/Greg Conn
Subscribe
An Arizona woman who demanded to get faster service at a gas station received an unexpected, face-numbing slap over the weekend after she initiated a racist rant in which she told a shopper to “go back to Mexico.”

The incident took place on Saturday at a Super Pumper, the convenience store of a Shell-affiliated gas station in Phoenix, Arizona, and was recorded and later shared on social media by Greg Conn, who explained in a Facebook post that the events unfolded after the unidentified woman came barging into the gas station’s convenience store to complain about a faulty pump.

Per Conn’s account, the woman had asked for another clerk to be called to the registers so that she could be assisted in her gas-pumping troubles; however, she soon drew the ire of fellow shopper Karina Rodriguez after instructing her to go to a different clerk.

With Rodriguez not obliging, the disgruntled shopper went into a full-blown tirade. The cellphone footage begins with the unidentified woman telling Rodriguez that she needs to leave and that the store will not be serving her.

“You need to leave, you need to leave. We’re not serving you,” the woman says to Rodriguez, before Conn intervenes and questions the upset shopper over her decision to inform Rodriguez that “she needed to go back to her country.”

Clearly not one to stand down, Rodriguez fires back at the woman within seconds of her offensive remarks being made.

The woman eventually turns her attention to Conn, telling him that he needs to leave the store since he is not a party to the dispute. Although once Conn indicates that he has no intention of backing down and leaving the grounds, the woman then turns back to Rodriguez to ask her where she was born.

“Where were you born, b***h? I was born in America. Where are your ancestors from? They’re not from this country,” a fuming Rodriguez is heard saying, before adding, “b***h, you better go back to where you’re from.”

The woman responds by saying yet again that Rodriguez is “going back to Mexico.”

However, the situation quickly gets kicked up a notch after the woman places her hand on Rodriguez’s shoulder and shirt, which immediately prompts Rodriguez to start swinging, slapping the now-shocked shopper on the right side of her face.

It’s only then that the woman walks away from the scene, trying to readjust her sunglasses while repeatedly saying “oh my God.”

“You deserved it in my opinion. You pushed her, and she smacked you. That was self defense on her part,” Conn is heard saying as the woman walks toward the convenience store’s entrance. The video cuts off as staff appear to try to deescalate the situation.

Speaking to local news station Fox 10, Conn said that the woman claimed that she owned the station and that she was a manager - two claims that have since been discredited by the actual owners of the store. In remarks to TMZ, store owners stated that the woman is no longer welcome at any of their locations.

000000
Popular comments
See? Just give them a slap and they will run with their tails tucked between their legs. Americans are the biggest cowards in human history.
Purifier
8 June 2020, 22:47 GMT14
000000
Shopper got what she deserved. Hope she remembers the experience with humility.