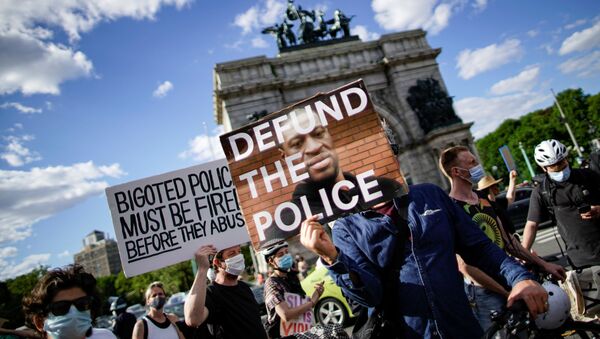 Finian Cunningham
All materials
The United States seems hopelessly riven with division, as the mass protests over the police killing of African-American man George Floyd reveal.

Protesters are calling for police forces accused of systematic racism to be defunded and disbanded. While opponents – many of whom seem to be supporters of President Trump – are calling for a tough law-and-order response to what they view as rioters and subversives.

The sharp tensions have even torn through the offices of the New York Times. Journalists at the paper are in open revolt after it published an opinion piece by Republican Senator Tom Cotton who endorsed Trump’s threat to send in troops to quell street demonstrations. Such a presidential move has been condemned as violating the US constitution.

Trump warned that he would deploy army units if states did not bring mass protests under control. Critics say he is using relatively minor incidents of rioting and looting as a cover for invoking federal military powers. There is even the suggestion of Trump angling for some kind of presidential dictatorship, as he overrides the autonomy of individual states.

The president and his supporters accuse Democrat-run states of using the protests as a way to mount sedition against his administration.

This is an echo of earlier claims by the Republican occupant of the White House who has slammed Democrat states for allegedly using the Covid-19 pandemic lockdown as a means to sabotage the economy and therefore his presidency. Trump’s call for “liberating” states has sailed close to the wind on being perceived as fomenting armed revolt.

Again Trump got into constitutional trouble by threatening to pull rank on individual states over their lockdown policy with federal decree. This conflict between Washington and the governing rights of individual states harks to the US Civil War more than a century-and-a-half ago.

Trump supporters like radio host Rush Limbaugh are warning that the country is heading towards another “veritable civil war” especially as the presidential election in November approaches. Trump has himself predicted a “civil war” breaking out if he is cheated out of re-election. Given the increasingly toxic political atmosphere in the US, it wouldn’t be hard for Trump supporters to construe political skulduggery even if it didn’t occur.

But the divisions in the US are not merely along Republican-Democrat lines. It’s more complex and chaotic than that. There’s no good guy versus bad guy scenario either. All sides are steeped in conspiracy theorizing of malign plots.

Republicans claim the protests sparked by the killing of George Floyd in Minneapolis on May 25 are “colour revolutions” to overthrow Trump. Some Democrats claim that Russia is stoking unrest in order to sow division in American society in a reprise of the Russia collusion nonsense which they say helped Trump win the White House in 2016.

Former military leaders have recently also broken with political tradition not to publicly lambast a sitting president. In an extraordinary interview, Four-Star General and former Secretary of State Colin Powell excoriated Trump for “lying all the time”. Other senior military figures, including retired Marine General James Mattis and Navy Admiral William McRaven, have also in the last week deplored Trump as being unfit for office.

Powell – a former senior Republican government official – went as far as saying he would vote for presumed Democrat candidate Joe Biden in the November elections.

Such unprecedented outspoken opposition to Trump from public figures associated with the Pentagon may be taken as evidence by supporters of the president that the “deep state” is manoeuvring against him and trying to manipulate the electoral process.

There may be a grain of truth in that. Trump’s demagoguery and the uncouth manner in dealing with domestic and international politics have no doubt agitated the political establishment to get rid of him for a more plausible commander-in-chief; perhaps someone like Biden who is every bit an imperialist puppet as Trump is but one who can convey the semblance of a unifying presidency.

Protesters' Calls to 'Defund the Police' in US Spark Nationwide Debate
The truth is, however, that the class and racial divisions of US society are so deep and entrenched that the country is hopelessly divided in the existing mould of bipartisan politics. Neither of the two parties – two sides of the same coin of big business and the military-industrial complex – can offer any solution to the Ugly States of America.

The nation is heading for implosion under the weight of its own endemic political and economic corruption. Trump’s not the cause of that. He is only an unwitting catalyst, just like Biden is and all those bipartisan pundits who presume to offer opposition to Trump.