Samsung Heir Appears in Court for Hearing on His Arrest Amid Succession Probe, Reports Say 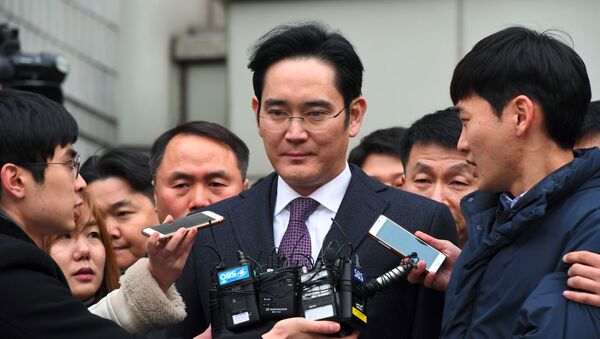 © AFP 2021 / JUNG Yeon-Je
Subscribe
MOSCOW (Sputnik) - Vice Chairman of Samsung Electronics Lee Jae-yong, the de facto leader of South Korea's largest conglomerate, Samsung Group, has appeared in the Seoul Central District Court for a hearing on his arrest amid allegations of his involvement in a merger and accounting fraud in a bid to take over control of the group, media reported.

According to the Yonhap news agency, the hearing is likely to last several hours, with the announcement of the court's decision expected late on 8 June or early on 9 June.

Lee Jae-yong is currently under investigation concerning the controversial merger of two Samsung affiliates, Cheil Industries and Samsung C&T Corporation, in 2015, which was considered to be a key step in his takeover of the group from his ailing father, Lee Kun-hee.

Last week, the Seoul prosecutors requested an arrest warrant for the Samsung heir, saying he should be imprisoned again due to the seriousness of his alleged wrongdoings and the possibility of destroying relevant evidence. In addition, prosecutors sought arrest warrants for two former Samsung executives, Choi Gee-sung and Kim Jong-joong, as they believe all three have been involved in efforts to help Lee succeed his father, who suffered a heart attack in 2014.

In particular, according to the prosecution, Lee could have been engaged in a scheme to boost the value of Cheil Industries and lower that of Samsung C&T Corporation prior to their merger in 2015.

Samsung Electronics Factory in S. Korea Closed After Employee Tested Positive for Coronavirus
In 2019, the Samsung heir and his aides were also suspected of inflating the value of Samsung Bioepis — a joint venture between the Samsung Biologics pharmaceutical company and the US-based Biogen Inc — by nearly 4.5 trillion won ($3.64 billion).

The probe into the merger began in November 2018 after the Securities and Futures Commission under the Financial Services Commission filed a complaint against Samsung Biologics, suspecting it of accounting fraud. Prosecutors have since expanded the investigation, claiming that the alleged fraud might have been a ploy to boost the control of the Samsung heir within the company. If the arrest warrant is approved, it will be the first time in more than two years that Lee will be arrested for criminal charges, following his imprisonment for about a year in 2017 for bribing a confidant of former President Park Geun-hye in exchange for the then-administration's support for the 2015 merger.