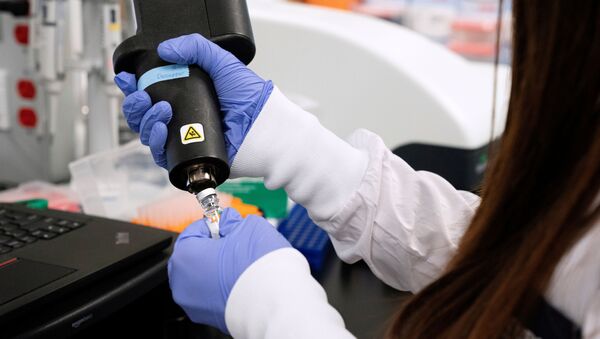 BEIJING (Sputnik) - China has refuted accusations of being behind attempts to sabotage COVID-19 vaccine development of western countries and asked Rick Scott, a US senator who made such claims, to show evidence, Chinese Foreign Ministry spokesperson Hua Chunying said on Monday.

"This lawmaker said the US has evidence that China is trying to sabotage the development of a COVID-19 vaccine by Western countries. Well, if he does have such evidence, just show it to us. No need to be shy", Chunying said, adding that certain US politicians often spread anti-China "lies and rumours".

The spokeswoman also said that vaccine development was not a race between China and the United States, "but one between mankind and the virus".

"As President Xi Jinping pledged at the 73rd World Health Assembly, after being developed and deployed, China's COVID-19 vaccine will be made a global public good. This will be China's contribution to enhancing vaccine accessibility and affordability in developing countries", Chunying said, and wished that Washington would also make the same pledge to the world.

On Sunday, Scott told BBC in an interview that Beijing is trying to block vaccine development. The senator said that Washington has evidence via the "intelligence community" but did not provide any more details.

In May, Robert O'Brien, the national security adviser to US President Donald Trump, said that he was sure Washington would be the first to develop the COVID-19 vaccine. Nonetheless, O'Brien also said that China might try to steal a vaccine. Beijing has called such accusations baseless.