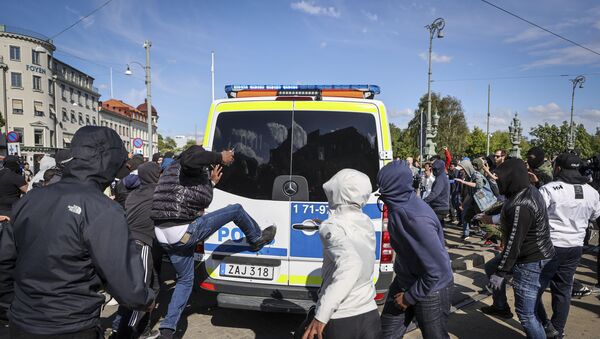 A “peaceful” Black Lives Matter protest in Gothenburg has turned violent, with mobs attacking the police, pelting them with stones and looting. The violence was subsequently blamed on “outsiders” seeking to confront the authorities and inflict damage.

Despite the current restrictions on gatherings upwards of 50 people, a Black Lives Matter demonstration in Gothenburg protesting the death of African American George Floyd in the US at the hands of the police there has gathered around 3,000 participants.

About a dozen people were seized, with the police promising more arrests.

Having gathered on the Avenue, the city's main artery, the demonstration soon turn violent, with protesters throwing stones at the police.

​According to the newspaper Aftonbladet, the protesters attacked a reporter and broke their camera.

Law enforcement officers surrounded the scene and the riot police were deployed. The mob, however, did not disperse but stood toe-to-toe with the police. They then managed to push the police back, to great applause.

​Tweet: Do the police in other countries also back down for the mob in entire platoons, or is it part of the unique, Swedish model?

Aftonbladet's own reporter had to flee the scene after a firecracker was thrown at him.

​According to the police, many of the troublemakers were of immigrant descent.

“It is young people from the suburbs who take this opportunity and riot”, police spokesman Christer Fuxborg told Aftonbladet. “In our opinion, these are individuals who are here to destroy”, Fuxborg added. “Right now I don't feel so proud to be a resident of Gothenburg”, he added

​Several cases of looting were reported in social media.

​Tweet: Some poor sods who probably packed this van for moving had it raided by #BlackLivesMattersweden in Gothenburg.

Sweden's national broadcaster was subsequently criticised for its coverage, as it blurred the faces of rioters.

​Tweet: One man tries to stop a protester trying to smash a shop window in Gothenburg, and other protesters drive away the man who tried to intervene

Roda Hassan, one of the demonstration's organisers, later disavowed the violence and blamed it on “outsiders”.

According to Swedish Radio, hundreds of people unaffiliated with the Black Lives Matter movement participated in the demonstration.

“The only purpose, what I understand, is that they want to confront the authorities and deal out damage”, Fredrik Dahlgren of the Gothenburg Police said.

Another Black Lives Matter demonstration in Stockholm earlier turned violent, as the police used tear gas to disperse the crowd.

A wave of Black Lives Matter demonstrations protesting the death of African American George Floyd and police brutality has swept Europe, leading to unrest many major cities, including London and Paris.

Widespread anti-police-brutality protests rocked the United States and most major urban areas in the country following the death of African American George Floyd at the hands of police officers last month, one of whom knelt on his neck for nearly nine minutes until he became unresponsive and later died.