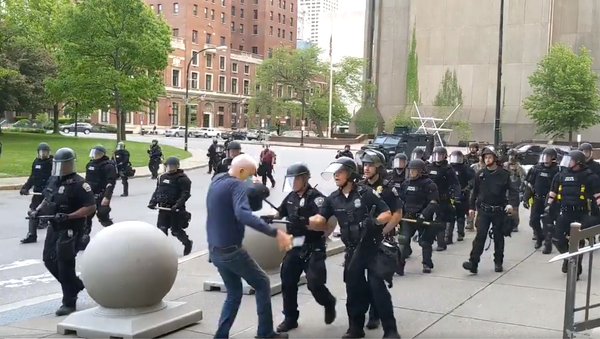 An appalling video revealing Buffalo police officers shoving an unarmed 75-year-old man to the ground, causing him to bleed out of his ears, went viral immediately after being posted. The two police officers involved in the incident have been suspended without pay and charged with assault.

Buffalo Mayor Byron Brown on Friday claimed that, according to "what was reported" to him, Martin Gugino, the elderly man that was injured by Buffalo police was a "key and major instigator" of the protest. In a radio interview, Brown insisted that the man "was trying to spark up the crowd of people" and made reference to something he referred to as "the darkness."

"He was trying to spark up the crowd of people. Those people were there into the darkness. Our concern is when it gets dark, there is a potential for violence. There has been vandalism, there have been fires set, there have been stores broken into and looted. According to what was reported to me, that individual was a key and major instigator of people engaging in those activities", Brown said.

The city mayor also claimed that police repeatedly told Gugino to leave while trying to disperse crowds after the start of the 8 p.m. curfew, although the video appears to show a brightly sunlit scene. Mayor Brown did not specify the source of his accusations.

The comment followed outrage caused by the viral graphic video of Buffalo police shoving an unarmed Gugino to the ground after he slowly approached them, displaying no aggression. After he fell, he lay motionless as blood oozed out of his ears. The police department initially claimed that he tripped and fell of his own accord.

Gugino has been placed in a hospital, and Robert McCabe and Aaron Torgalski, the two officers involved in the violent incident, have been suspended without pay and charged with assault. Following their suspension, an entire unit of the Buffalo Police Department resigned from their local unit in support of their colleagues, although they did not resign from their jobs in the Buffalo police force, claiming the two were "simply following orders".

The incident occurred amid a wave of nationwide protests across all 50 of the United States as well as in most urban areas and cities, sparked by the viral video of the death of African-American George Floyd in Minneapolis after white police officer Derek Chauving knelt on his neck on the ground for nearly nine minutes as the victim begged for air.