China Would Lose 95% of Ballistic, Cruise Capability If It Signed US Nuclear Pact, Research Shows 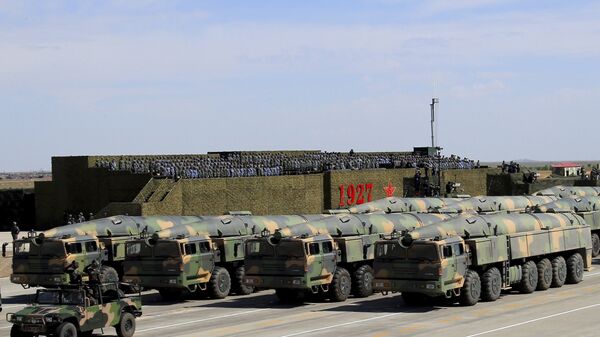 Ilya Tsukanov
All materialsWrite to the author
In its justification for binning the Intermediate-Range Nuclear Forces Treaty (INF) last year, and its sluggish response to Russian proposals to renew the New Strategic Arms Reduction Treaty (New START), the Trump administration has repeatedly demanded that China be made a party to any new nuclear arms control treaty.

Beijing would be forced to destroy 95 percent of its current ballistic and cruise-missile inventory if it joined a new INF-like treaty banning the development and deployment of ground-based weapons in the 500-5,500 km range. That’s according to analysts from the London-based International Institute for Strategic Studies (IISS), a major European defence and national security think tank.

In a new report dubbed ‘Asia-Pacific Regional Security Assessment 2020’, researchers suggest that it would essentially be irrational for the People’s Republic to sign on to such a treaty, given that the vast majority of China’s missiles are in the short and medium-range categories, which give the country a “comparative advantage” strategically in the region. According to IISS estimates, China has over 2,200 missiles that would fall into a ‘new INF-style treaty’s’ purview. For comparison, according to a 2019 estimate, China has just 90 intercontinental ballistic missiles capable of reaching the US mainland.

“The best way of avoiding a worst-case outcome might be a wider approach to regional arms control, which would involve the US making concessions beyond foregoing the deployment of ground-based missiles and China demonstrating a greater willingness to engage in strategic and regional arms control,” the think tank suggests. 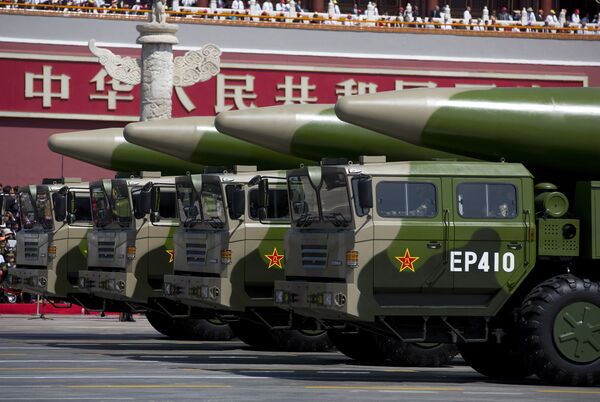 Military vehicles carrying DF-26 ballistic missiles drive past Tiananmen Gate during a military parade at Tiananmen Square in Beijing on September 3, 2015, to mark the 70th anniversary of victory over Japan and the end of World War II
© AFP 2022 / ANDY WONG

After scrapping the INF Treaty last August, the US immediately began testing of ground-based missiles banned by the treaty, with Secretary of Defence Mark Esper announcing plans to deploy such weapons in the Indo-Pacific region. China blasted the decision, while multiple US allies, including the Philippines and South Korea, vowed that they would not allow for such arms to be stationed in their countries.

The INF prohibited the development, building and fielding of all ground-based missile systems in the 500-5,500 km range, and was signed by the USSR and the USA in the final years of the Cold War, with its prime goal being the reduction of the risk of an unexpected nuclear war in Europe. Before scrapping the treaty, the US withdrew from the Anti-Ballistic Missile treaty – aimed at preventing the nuclear superpowers from building anti-missile systems, in 2002. In recent years, Washington has also deployed Aegis Ashore anti-missile systems in Romania and Poland. Moscow fears these systems could be armed with offensive cruise missiles, with their deployment near Russia’s borders dramatically reducing flight time and increasing the temptation of a decapitation strike.

In addition to these issues, the Trump administration has recently raised concerns from domestic anti-nuclear groups, as well as Russia and China, over its revision of its nuclear doctrine in 2018 to allow for the use of nuclear weapons in a conventional war, its efforts to militarize space, and recent reports that the US might withdraw from the Comprehensive Nuclear Test Ban Treaty and resume nuclear weapons testing.

Despite these steps, US officials including chief Trump arms control negotiator Marshall Billingslea have alleged that Russia and China, not the US, are responsible for starting an arms race. Moscow and Beijing have dismissed such claims.