Bolsonaro Threatens to Follow in US Footsteps and Leave WHO 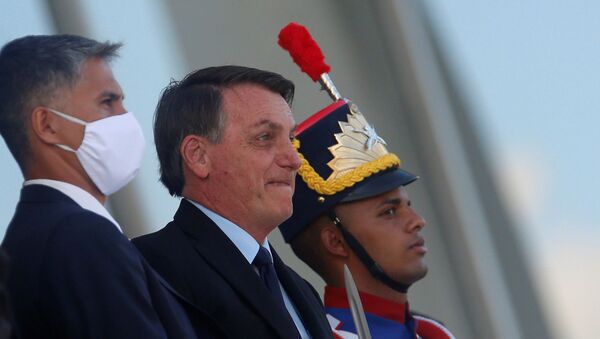 Earlier, US President Donald Trump cut ties with the World Health Organization after accusing the agency of having a "China-bias" amid the coronavirus COVID-19 pandemic.

Brazilian President Jair Bolsonaro, while speaking to CNN Brazil, warned that the nation could follow the United States and leave the World Health Organization (WHO), accusing the global health agency of being a "political partisan organization".

“And ahead of here, the United States left WHO, and we study, in the future, either WHO works without ideological bias, or we will be out too. We don't need anyone from outside to give a hunch on health in here", Bolsonaro told reporters.

Bolsonaro stated that hydroxychloroquine "is back" as a potential anti-COVID-19 medication, returning after "sham" studies on its efficacy based on false data were pulled back, echoing US President Donald Trump's appraisal of the anti-malarial drug as an effective measure against the coronavirus.

"What is this WHO for? The WHO recommended a few days ago not to continue with studies on hydroxychloroquine, and now it has turned back. Just take their money and they start thinking differently", he suggested.

His comments come as Trump earlier cut ties with WHO, removing US financing over accusations that the agency is "China-centric" and that it had refused to make "necessary reforms" that Trump had earlier demanded in a letter to the organization. The WHO repeatedly denied all allegations, still expressing hopes for possible collaboration with the country.

The Brazilian president's intention to follow Trump in relation to the WHO comes as he has been criticized for "clearly imitating both the actions and the rhetoric of the United States", as some experts imply.

Bolsonaro is known to enjoy good relations with the Trump administration, even amid POTUS's implementation of a travel ban between the countries after Brazil saw a sharp increase in registered coronavirus infections and deaths.