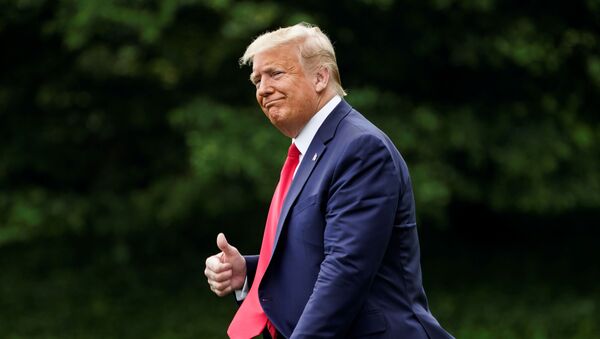 The UN staff have expressed solidarity with victims of racism amid the ongoing wave of protests caused by the death of African-American man George Floyd, UN Secretary-General Antonio Guterres said.

MOSCOW (Sputnik) - President Donald Trump has thanked Washington police and the National Guard for their work during the major George Floyd protests in the US capital.

"Much smaller crowd in DC than anticipated. National Guard, Secret Service, and DC Police have been doing a fantastic job. Thank you!" Trump wrote on Twitter on Saturday.

Thousands of people took the streets of Washington DC on Saturday, staging rallies near the Lincoln Memorial and the White House and marching past the Capitol and the State Department. According to a Sputnik correspondent, the Saturday demonstrations in the US capital could be the biggest day of protests yet.

A Sputnik correspondent reported that police were keeping a low-profile in DC on Saturday. Officers, sometimes accompanied by National Guard soldiers, were present at the scene, but wore plain uniforms rather than riot gear and interacted amiably with people.

Security units were criticized for using excessive force earlier this week when protests turned violent in Washington, DC and were marred by looting and arson.

"Our community has serious concerns about the use of CS gas for crowd management, particularly during a time when we’re battling a pandemic. I share those concerns. Today, I directed Portland Police Chief Jami Resch that gas should not be used unless there is a serious and immediate threat to life safety, and there is no other viable alternative for dispersal," Wheeler said in a statement on Saturday, broadcast on Twitter.

"I stand in solidarity with our non-violent demonstrators, who are sending a strong message that we are long overdue for meaningful reform and restorative justice," Wheeler said adding that he is "acutely aware of the urgency around these issues and will continue to work together in the coming days to put together a package of actions that address the demands we are hearing loudly from our community."

MOSCOW (Sputnik) - Some 30,000 people on Saturday have taken to the streets in Chicago to protest against police brutality and racism and voice the need for police reform in the United States in light of George Floyd's death, media reported.

The city authorities have limited access to the Loop, the city's central business district, and raised most Chicago river bridges amid rallies.

According to the Chicago Sun-Times newspaper, groups of political activists and protesters gathered on Saturday near West Side Park before heading north on Ashland Avenue and marching through West Town. People are chanting anti-racism slogans calling for justice and the end of police violence.

Hundreds of protesters took a knee near the 14th district police station with some of them chanting "silent cops are guilty, too," CBS Chicago reported.

The demonstrations are held in a peaceful manner, media said.

MOSCOW (Sputnik) - At least 23 police officers were injured in past several days during ongoing protests against racism and police brutality in London sparked by George Floyd's murder in US' Minneapolis city in late May, Jo Edwards, a police superintendent, said.

Thousands of people marched through central London on Saturday, despite the ongoing coronavirus pandemic and calls by the authorities to refrain from gathering to avoid a sharp increase in infections.

"We understand peoples' passion to come and let their voice be heard, they protested largely without incident. Our officers have been professional and very restrained but there was a smaller group intent on violence towards police officers. Twenty-three officers have received injuries, doing their job, policing protest over the last few days, and that is totally unacceptable," Edwards said, as quoted by a statement published on the London Metropolitan Police's website.

According to Edwards, ten policemen were wounded and 14 people were detained during Saturday's marches alone.

GENEVA (Sputnik) - Mass demonstrations in solidarity with US protests against racism and police brutality were held in various Swiss cities on Saturday, media reported.

According to Swiss RTS broadcaster, the rallies took place, including in Neuchatel, Zurich and Bern. In Basel, 5,000 people gathered for an unauthorized rally on Saturday morning. In Neuchatel, about 500 people took part in the demonstration, although the local police authorized a rally with the participation of no more than 300 people in accordance with the restrictions still in force due to the COVID-19 outbreak.

The rallies were mostly held peacefully and almost all participants wore protective masks, the broadcaster said. The police did not interfere in sanctioned rallies. In a number of places, protesters were given memos about precautions during the COVID-19 pandemic.

Meanwhile, sources told Sputnik that new rallies were planned to be held next week in Geneva.

During the demonstrations against police brutality in Philadelphia, large crowds of protesters were filmed flooding city streets, and making their way from the Philadelphia Museum of Art to City Hall.

The crowd in Philly is...unfathomable? I can’t even guess. Unbelievable. pic.twitter.com/02ZIcyTXW5

NEW YORK (Sputnik) - A demonstration is being held at the United Nations headquarters in New York with the protesters calling for a UN resolution condemning the actions of the United States with regard to racial minorities, a Sputnik correspondent reports.

About 100 people have gathered in front of the entrance to the UN headquarters. They are recalling the recent condemnation of racial violence in the US by independent UN human rights experts and are calling for a UN resolution condemning systematic racism in the US. The protesters are also calling for cutting police funding.

On Friday, UN human rights experts condemned the killing of George Floyd in a statement calling for "systemic reform and justice." The experts pointed to racial violence in the United States, saying that African-Americans "have good reason to fear for their lives."

In a separate statement on nationwide protests, experts of the UN Human Rights Council expressed their deep concern over the US government’s threat of militarized response to the George Floyd protests. The experts said that the protests the world is seeing now are a rejection of fundamental racial discrimination and the response to them should include concrete actions, matching people's demands, such as investing in healthcare, education, housing, and other social structures.

MOSCOW (Sputnik) - More than 23,000 people participated in demonstrations against police brutality and racism across France on Saturday, French media report.

In Paris, around 5,500 people took to the streets on Saturday, gathering outside the US embassy compound and at the Champs de Mars park facing the Eiffel Tower, France 24 TV said.

According to the French Interior Ministry, overall, more than 23,000 people protested nationwide on Saturday in about a dozen cities, including Lyon, Bordeaux, Nice, Lille and Metz, France 24 TV reported.

WASHINGTON (Sputnik) - Thousands of protesters gathered near Lafayette Square, across the street from the White House in Washington, DC, on Saturday to protest the in-custody death of black American George Floyd, a Sputnik correspondent said.

The protest has been peaceful, with almost all demonstrators carrying a placard and chanting "black lives matter," "no justice — no peace," and "justice for George Floyd."

Organizers of the protest have been handing out bottles of water, medical masks and sanitizers. A limited number of police forces have been deployed to survey the demonstration, with more events expected later in the day.

Two police officers in the city of Buffalo, New York state, have been charged with second-degree assault on Saturday amid public outcry over a video showing the officers showing an elderly man to the ground, Erie County District Attorney John Flynn said, as quoted by USA Today.

The officers, Robert McCabe and Aaron Torgalski, pleaded not guilty to the charges.

The injured man, 75-year-old Martin Gugino, is in "serious but stable condition. He is alert and oriented," said Attorney Kelly V. Zarcone, as quoted by the media organisation.

Thousands of people have gathered in the cities of Adelaide, Brisbane, and Melbourne, The Sydney Morning Herald newspaper reported. A big demonstration is also to be held in the city of Hobart.

Organizers of the rallies called on the activists to wear face masks, use sanitizers and respect the social distancing rules because of the COVID-19 pandemic.

Protests in Sydney have been banned by the Supreme Court of New South Wales due to the coronavirus restrictions.

A federal judge in the district of Denver in the US state of Colorado has temporarily banned Denver Police Department officers and those from other jurisdictions, who assist them, from using chemical weapons and non-lethal projectiles against peaceful protesters, a district court ruling said.

"Plaintiffs’ motion for a temporary restraining order, ECF No. 10, is GRANTED in PART. The Court temporarily enjoins the City and County of Denver, and specifically the Denver Police Department and officers from other jurisdictions who are assisting Denver Police Officers, from employing chemical weapons or projectiles of any kind against persons engaging in peaceful protests or demonstrations," the court said in a ruling released by the local Yellow Scene magazine late on Friday.

At the same time, the court clarified when police can use the non-lethal weapons against protesters, as the officers need to protect themselves. In particular, according to the ruling, chemical agents or irritants, including pepper spray and tear gas, may only be used after the relevant order is issued "in response to specific acts of violence or destruction of property that the command officer has personally witnessed."

Meanwhile, the Denver Police Department said that it would seek modifications to the order "that would account for limitations on staffing and body-worn cameras so the directions can be operationalized," according to the department's Twitter.

Demonstrations in support of the black community and protests opposing police violence against African American people have been underway in various US cities since late May in response to the killing of an African American man, George Floyd, in police custody. In some areas, the protests have turned violent.